Brock Scholars Tina Nguyen and Robert Fisher were crowned Homecoming Queen and Top Moc, respectively, at the Homecoming game on October 4. Their selection is not surprising since each has become in some ways “the face of UTC” for many on campus and in the community. 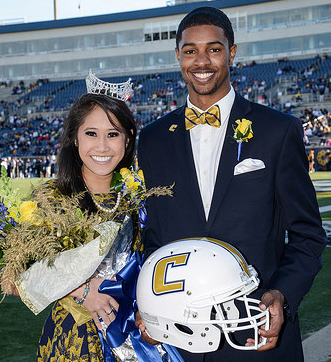 Tina has been a tour guide for the Undergraduate Admissions Office and a Student Orientation Leader for the past three years, so she is often the first person that prospective students and parents meet when they visit campus. She also serves as a Chancellor’s Ambassador, acting as an official host at many UTC functions, such as commencements, Chancellor’s Roundtable and UC Foundation meetings.  She’s also the star (along with the UTC mascot, Scrappy) in YouTube videos about the UTC campus.

Robert was elected SGA President last year and again this year. He’s also the current student representative of the UT System on the Tennessee Higher Education Commission.  He was selected by Chattanooga mayor Andy Berke to serve as co-chair of the Downtown Task Force for the Chattanooga Forward initiative.

Congratulations to both Tina and Robert for their much-deserved honor!