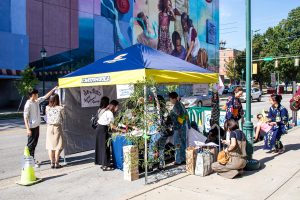 PARK(ing) Day is an annual global event where community groups and members showcase their work and temporarily transform metered parking spaces into “PARK(ing)” spaces: temporary public places. Citizens, artists, and activists will roll out the green grass, set up tents, and display art or hand out sweets. It all started in 2005 when a San Francisco art and design studio converted a single metered parking space into a temporary public park in downtown San Francisco. Since 2005, the project PARK(ing) Day has evolved into a global event, with organizations and individuals creating new forms of temporary public space in urban contexts around the world.

The Center for Global Education at UTC participated in the 10th annual PARK(ing) Day in Chattanooga on September 15, 2017. We set up a tent in our parklet along MLK Blvd. and showcased many Japanese crafts, toys, and clothing. UTC ESL students from Japan Aya Wada, Emishi Tokura, Himeko Takenaka, Juria Niwa, Karin Tsukada, Nami Isomura, and Sana Nishio all participated in the event and helped demonstrate their culture to the community. We also had many Japanese community members assist in the setup of our display and interaction with the community.  The tent was decorated with a 5 ft. tall bamboo tree, as well as Japanese flags and signs indicating the Center for Global Education.

There were many interactive displays and unique toys. The public were able to learn how to make different origami figures, such as a dog and a crane. Jenga attracted many children and families to the booth, which blossomed further into discussions about the display and Japanese culture.

Many Japanese community members wore traditional robes called Kimonos, which brightened up the display and made it feel as if we were all in Japan.

The mission of PARK(ing) Day is to gain attention to the need for urbaner open space and green spaces, to generate discussion about how public space is created and allocated, and to improve the overall quality of urban human habitat. PARK(ing) Day 2017 had around 65 parklets, and 602 people are walking along MLK Blvd. to see all of the spaces. The Center for Global Education at UTC contributed to this mission by far and will continue to be an active supporter of it in the years to come.