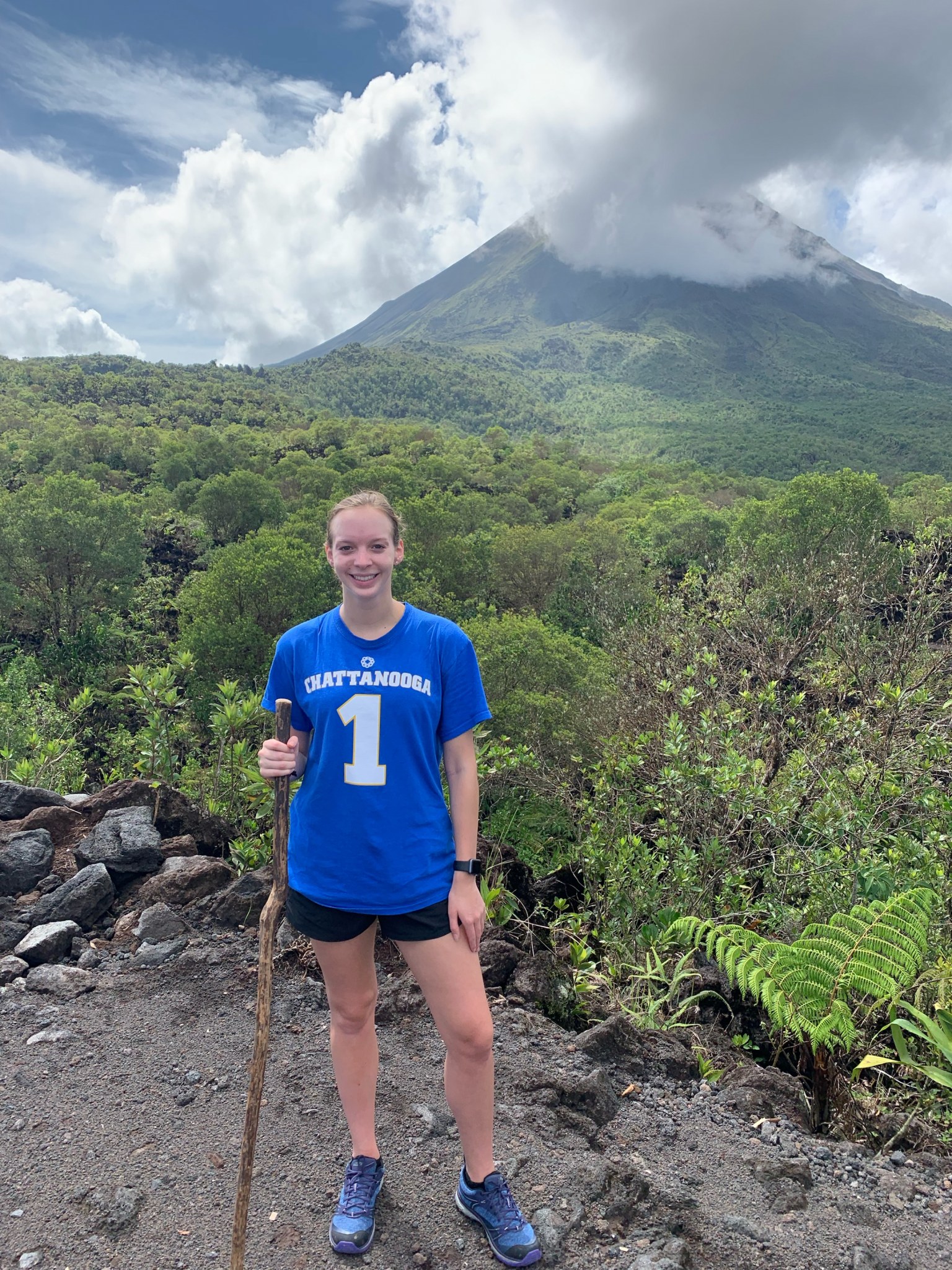 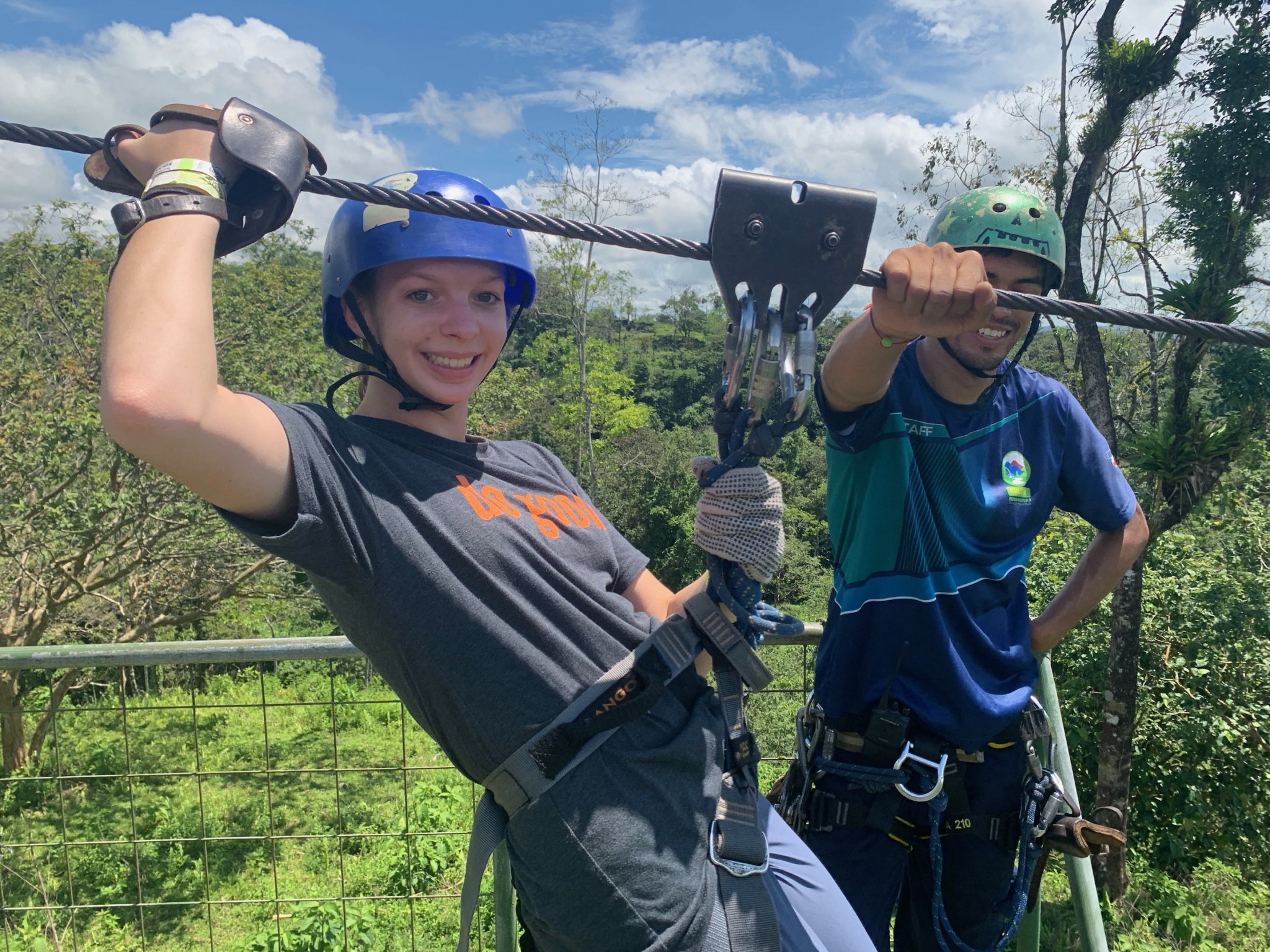 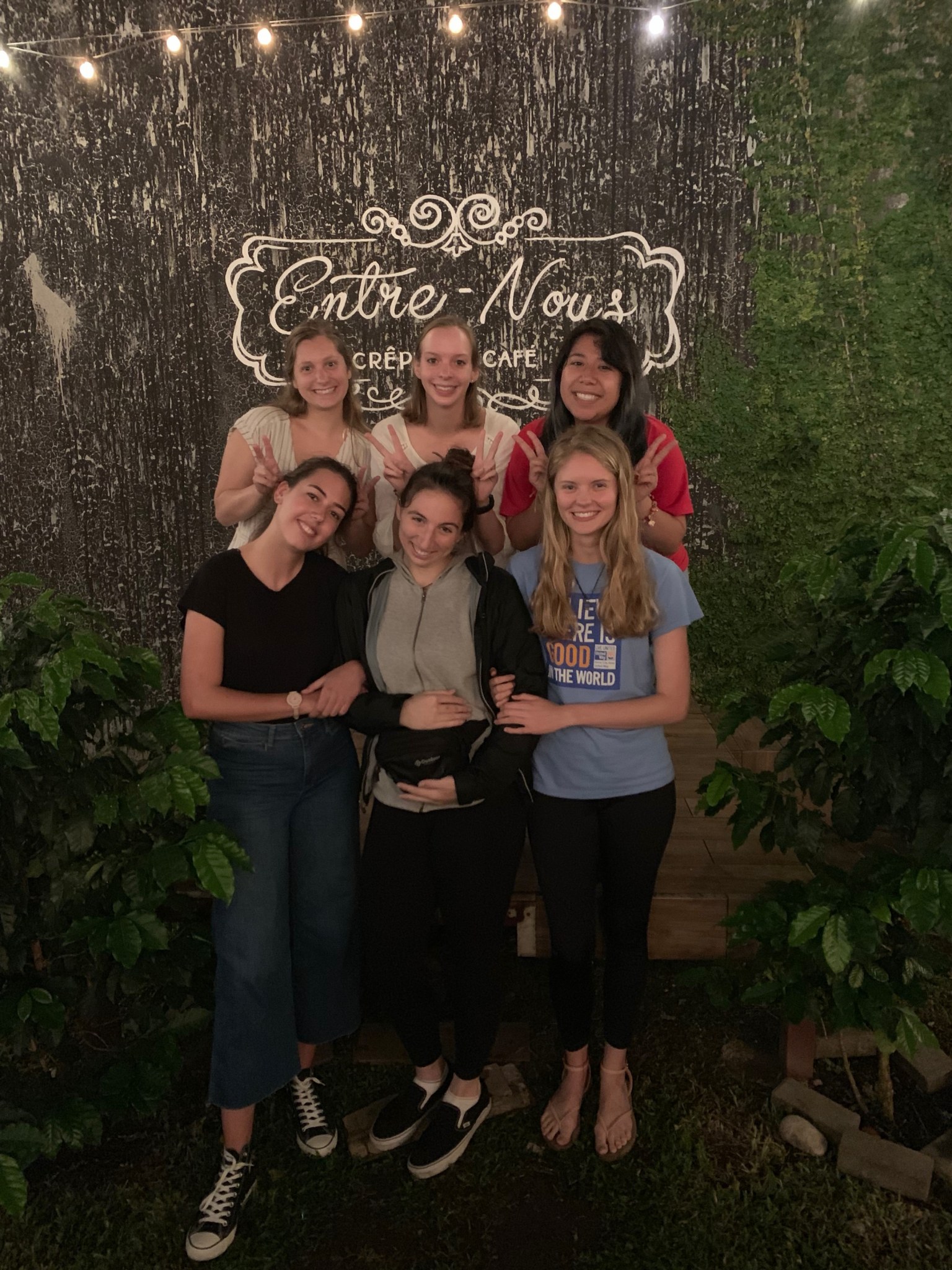 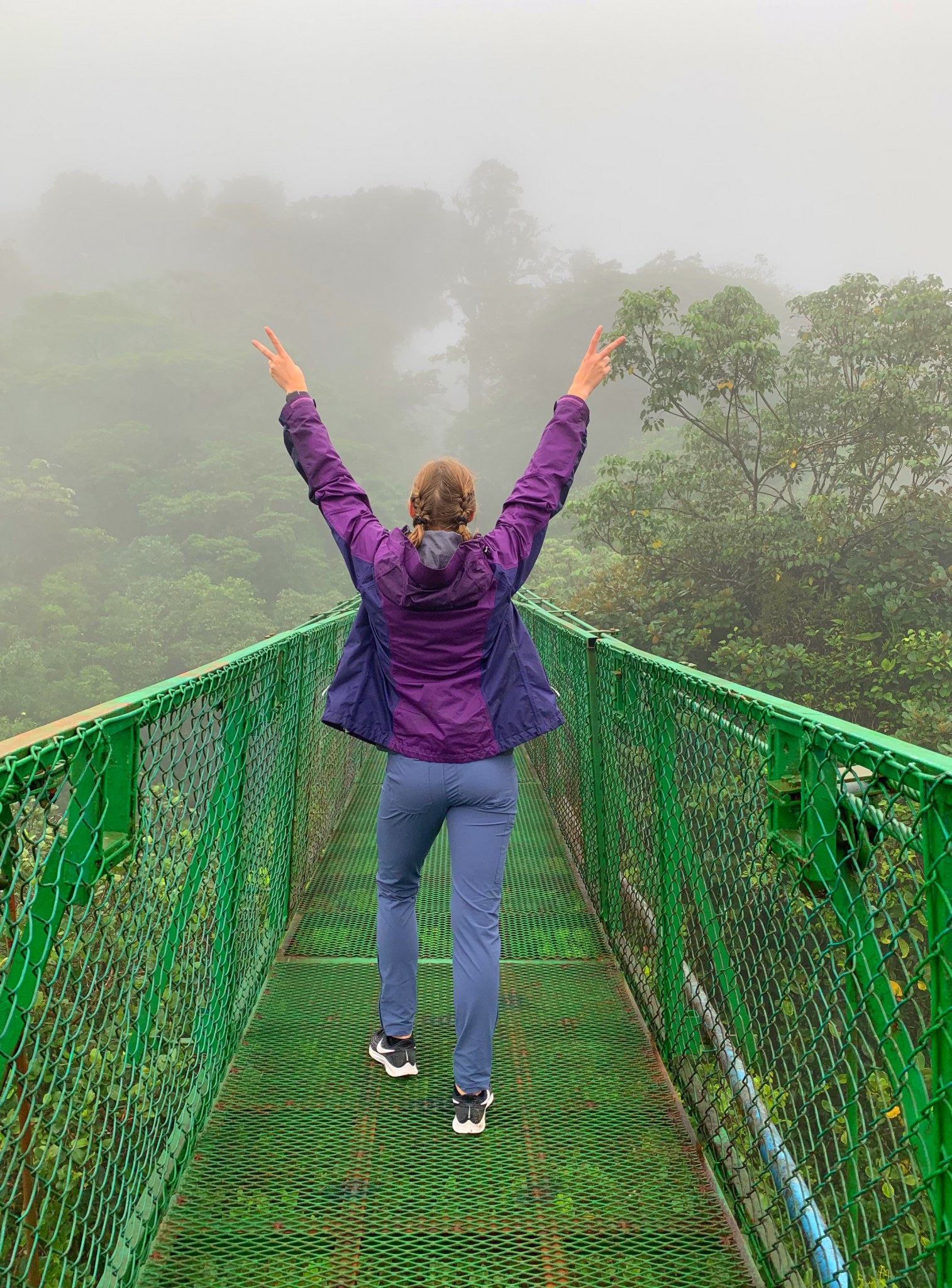 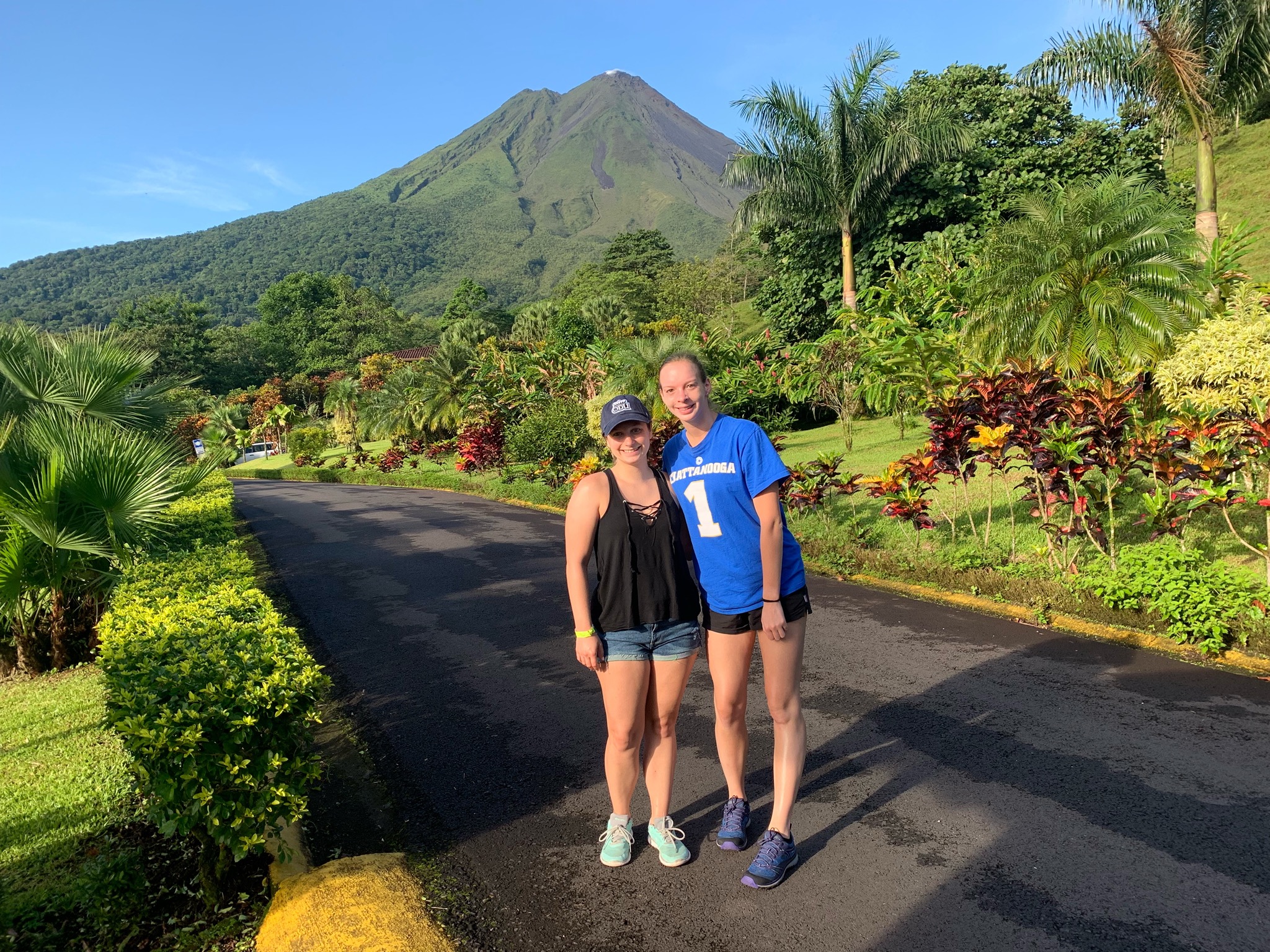 In America, we are constantly on the go; we are always working and searching for the next best thing. However, in Costa Rica, people live life at a slower pace, really enjoying where they are and who they are with. This is the essence of “Tico Time.” Ticos tend to have a nonchalant attitude about being on time or well the lack of being on time. For me, this concept really set the pace of my trip; I was not panicked about being to school early or meeting people at a set time because I knew everyone would show up late. Typically, in America, punctuality is everything, so people are quite stressed and anxious about getting places quickly, but in Costa Rica, the culture is much more relaxed and happier.

This past May and June (2019), I went to San José, Costa Rica, and studied Health Psychology and Spanish at Veritas University. Schooling in Costa Rica differs from America in that it is much more hands-on; there are more class discussions, fewer tests, and a lot of presentations. I think that this style of teaching really helped me absorb the information I was learning as I was always saying it aloud. When I went to Costa Rica, I did not know a lot of Spanish, but being placed in an environment where I had Spanish class four hours a day Monday through Friday with a professor that knew hardly any English and living with a family that didn’t know any English I learned quickly. I’m definitely not fluent by any means, but I really do believe the best way to learn a foreign language is to go to places where you are forced to speak it every day. I think I learned more in a couple of months in Costa Rica than I did in two semesters of Spanish in the US. I also think that when you are learning something new, you have to be comfortable with making mistakes. Fortunately for me, Costa Ricans are some of the friendliest people I have ever met and never made me feel embarrassed when I would use the wrong word or the incorrect tense.

Both of my classes also took us on field trips, which gave us opportunities to use the skills we learned in the classroom, in the real world. In my Spanish class, we went to small businesses and farmer’s markets where we spoke with vendors and learned about different fresh produce and material items. My health psychology class was probably my favorite because we were able to learn about how the Costa Rican health care system differs from America’s. We actually went and visited PANI, which is loosely similar to social services here in the States, and a nursing home. It was interesting to see how the Costa Rican government really tries to take care of each citizen and make sure they have a place to sleep, food, and health care. 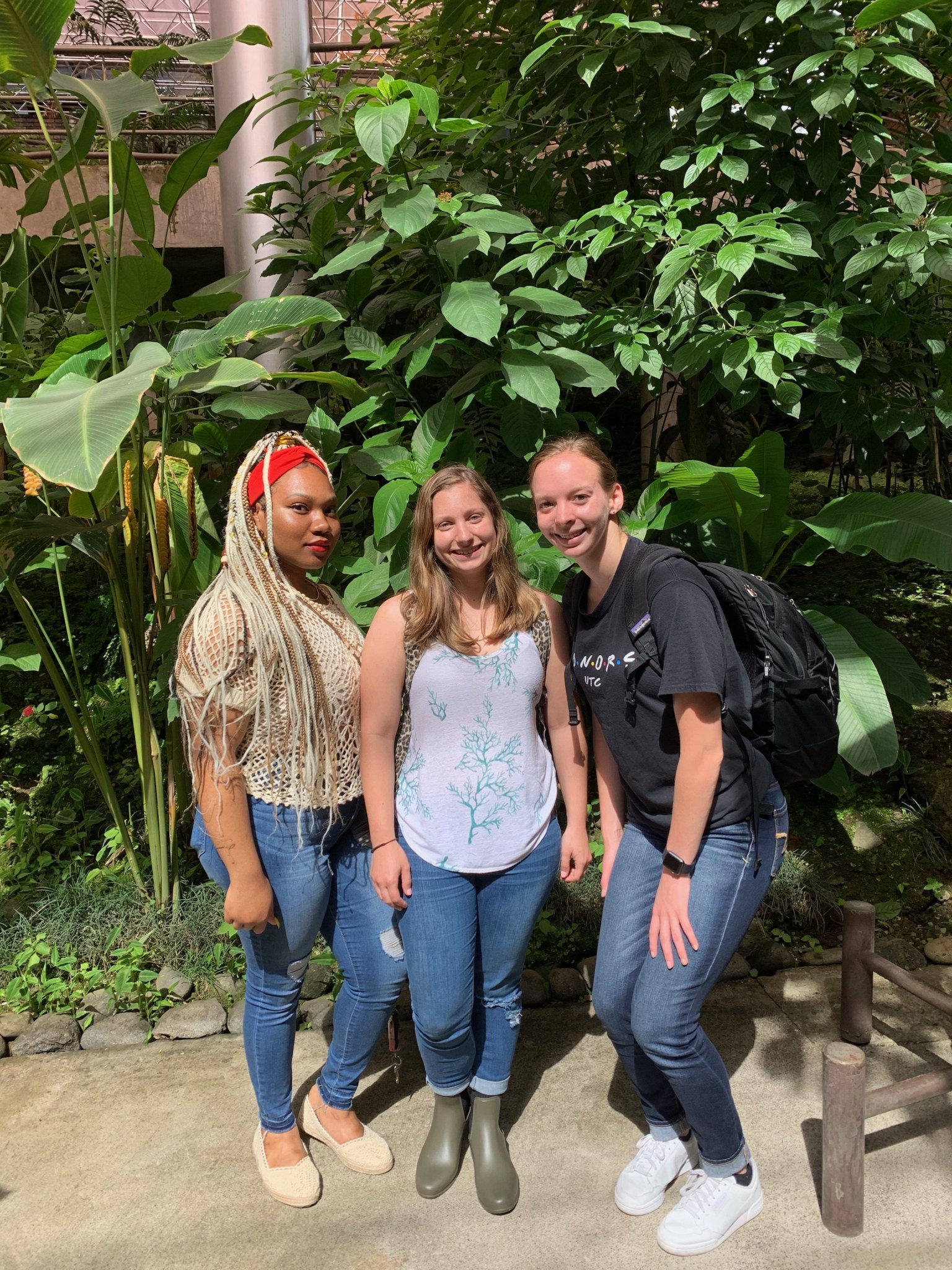 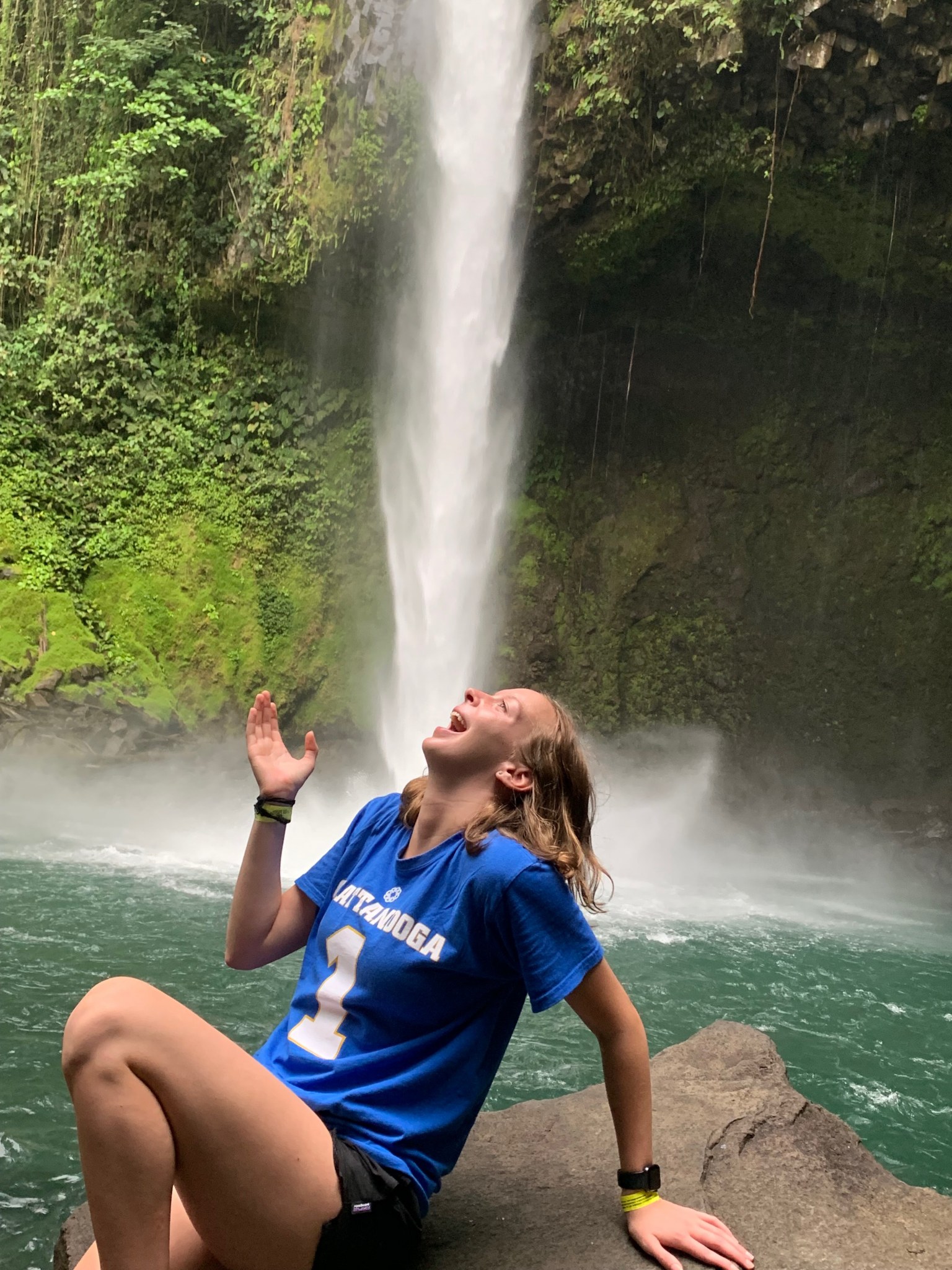 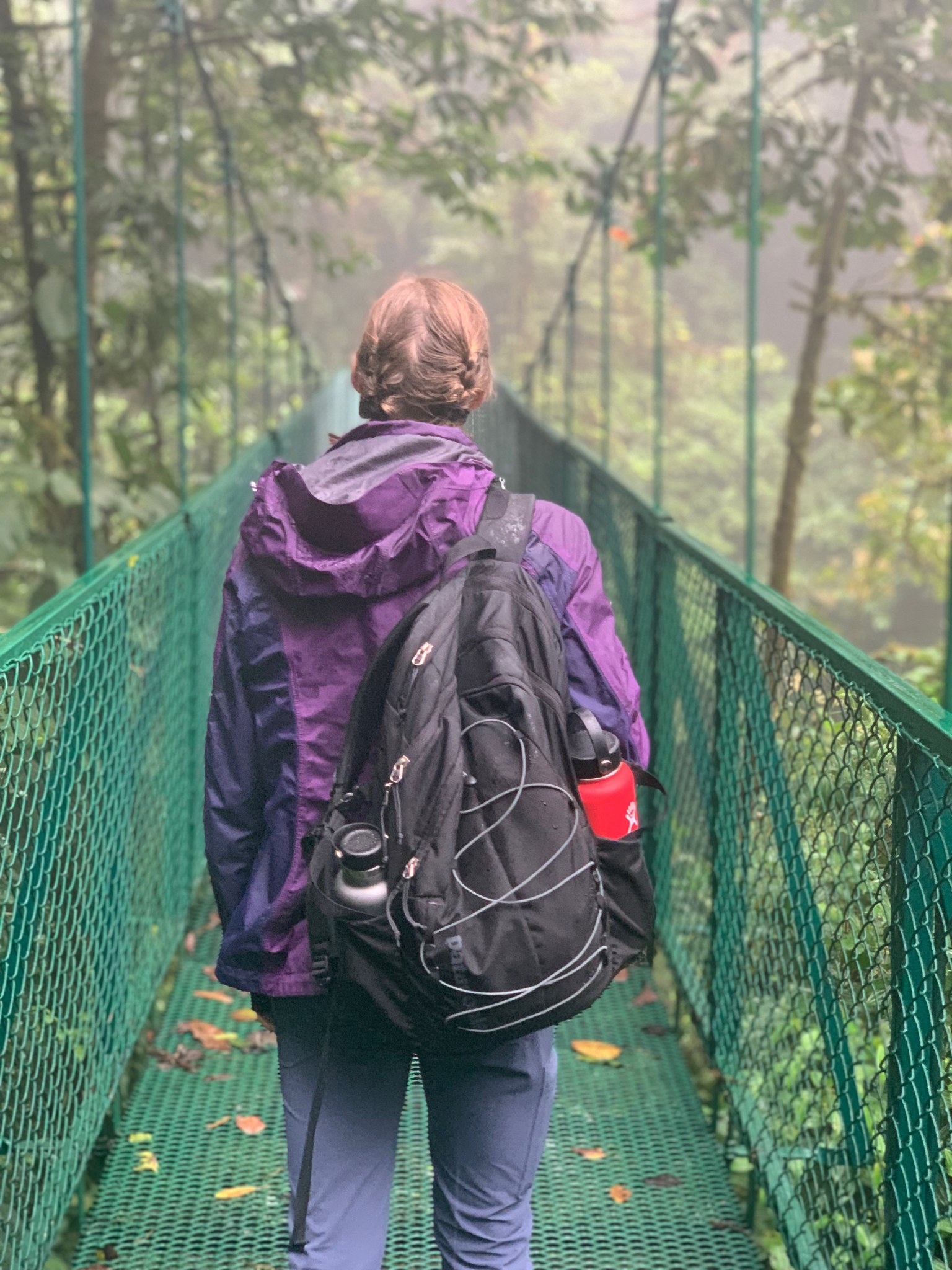 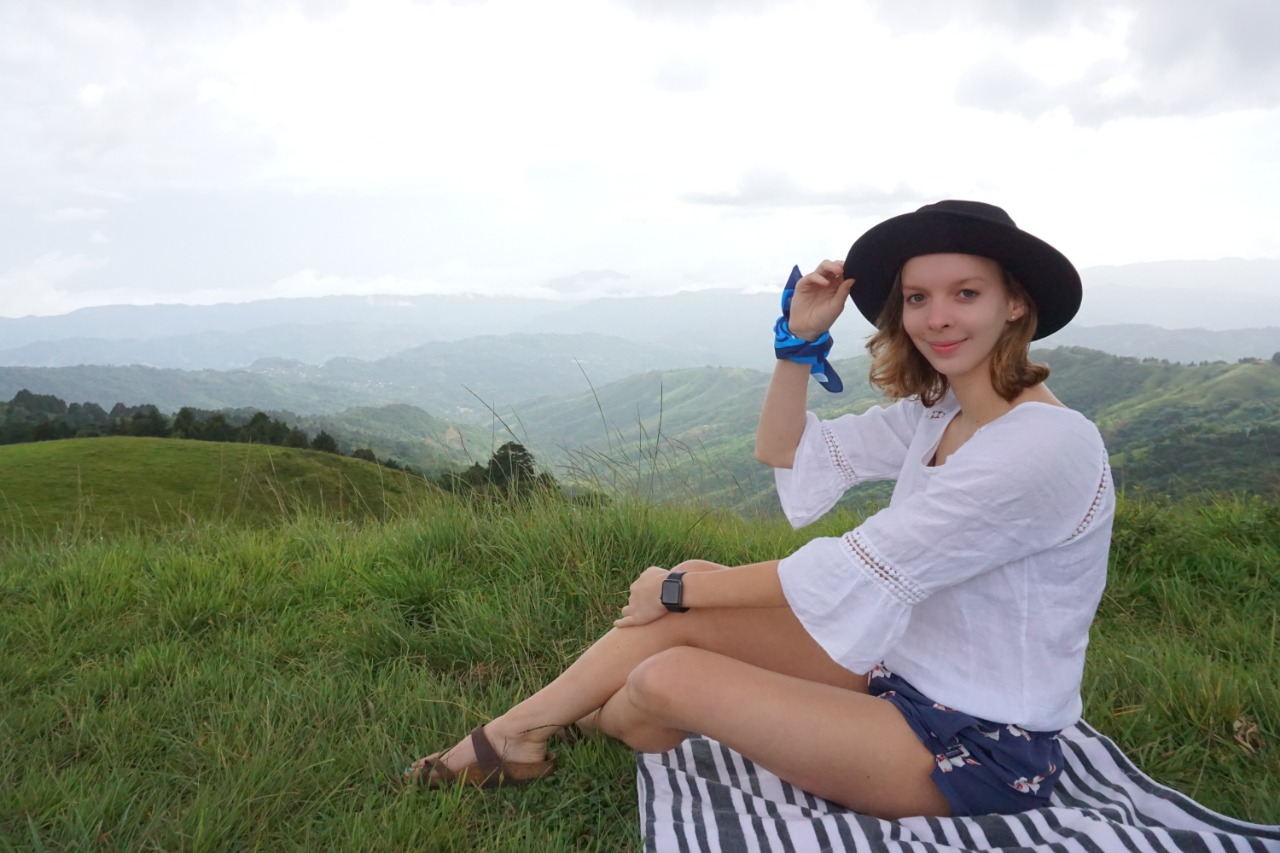 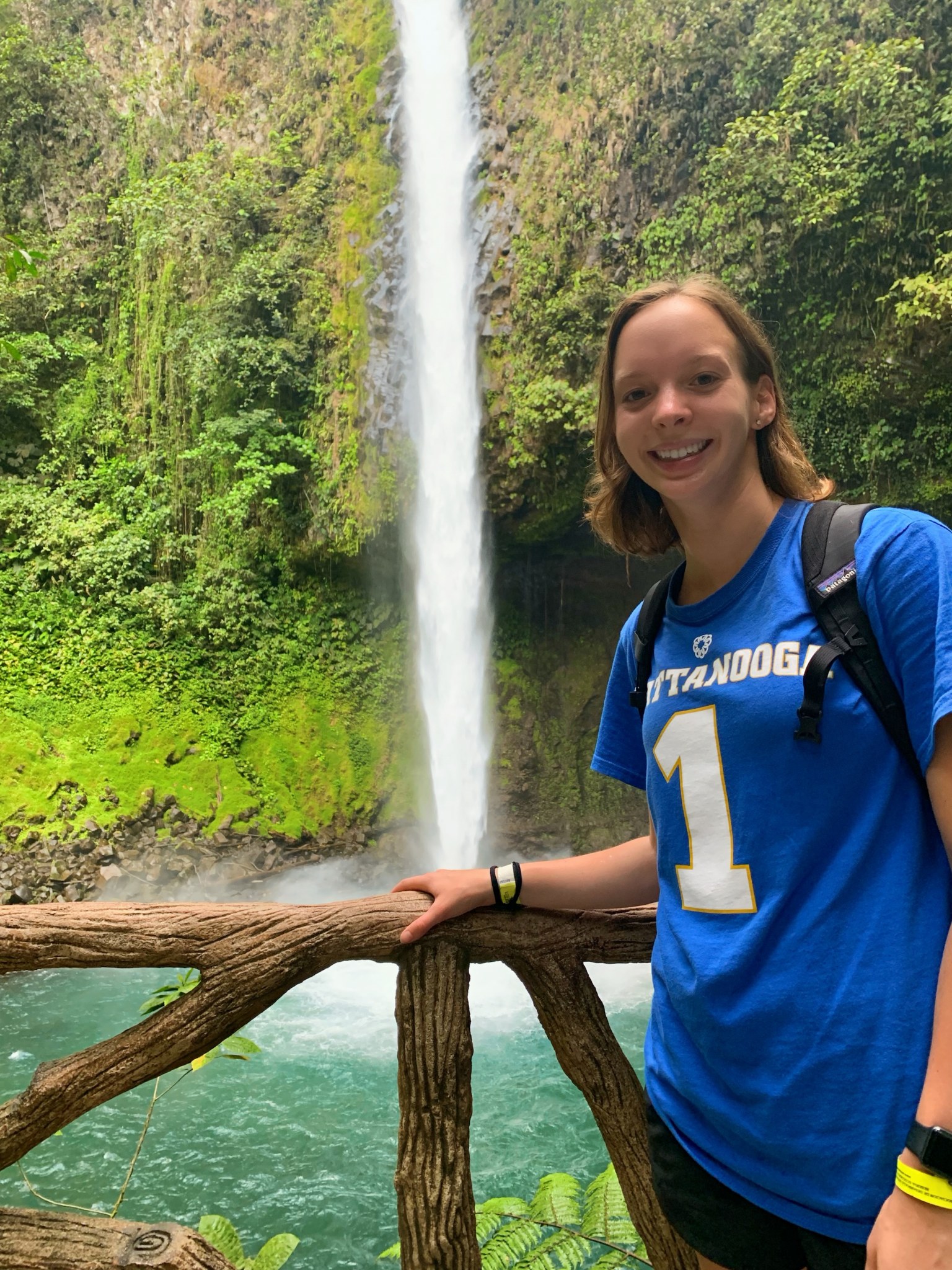 Outside of class, I would go to dance classes with my friends, try new foods, or go to different clubs. On the weekends, I would go on excursions either with my provider group or my friends from class. With my provider, I went to Manuel Antonio, a national park on the west coast of Costa Rica. Manuel Antonio is a cool mix of the ocean and forest; there you can see monkeys, sloths, dolphins, colorful crabs, and even go on a night jungle tour. Beware though, the monkeys are a little wild! The second destination I went to with my provider group was La Fortuna, which is a small area near the Arenal Volcano. There was so much to do in La Fortuna. We went zip lining over the canopy, swam under a waterfall, hiked around the volcano, and learned about the history of the area. We also went on a coffee plantation tour and swam in hot springs. My last weekend in Costa Rica, I went to Monteverde, also known as the “Cloud Forest.” This trip was probably my favorite because we were able to be on our own and explore the area. My friends and I walked along the famous cloud bridges, zip lined, shopped, and ate a lot of baked goods and ice cream!

Since San José is the capital of Costa Rica, it was easy to travel from one place to another. My friends and I usually traveled by bus when going across the country, and by public transport within San José. I would recommend that if you are traveling to ask someone to help you if you aren’t fluent in Spanish because figuring out the bus schedule can be confusing, and you don’t want to have to stand in a bus without A/C for hours on the way to Puerto Viejo.

All in all, I really enjoyed my experience in Costa Rica. I think one thing to keep in mind is not to set expectations because you never really know what to expect until you get there. Just embrace everything as it comes. I would recommend to students that are looking to study abroad that more likely than not, the culture will be very different from yours and that you should recognize and embrace those differences. I hope that wherever you go that when you look back, you say, “Wow, I’m so happy, I did that.” Don’t hesitate about studying abroad, just do it. For me studying abroad was all about stepping out of my comfort zone and trying everything at least once. The only things I would change would be to take more Spanish classes before (I only took Spanish in high school), and to have been able to stay longer. I think that we should all take some Tico Time in America to enjoy the friends and experiences you have.

Katherine Kite is majoring in Biochemistry and spent the Summer 2019 semester studying abroad in San Jose, Costa Rica  through ISA. Katherine had the following to say about studying abroad, “One should study abroad to feel uncomfortable and to experience a new culture not because you want to say where you’ve been. I think we often get caught up in a façade of social media appearances and forget to actually experience the world.”