More Than Just “Lion” Around 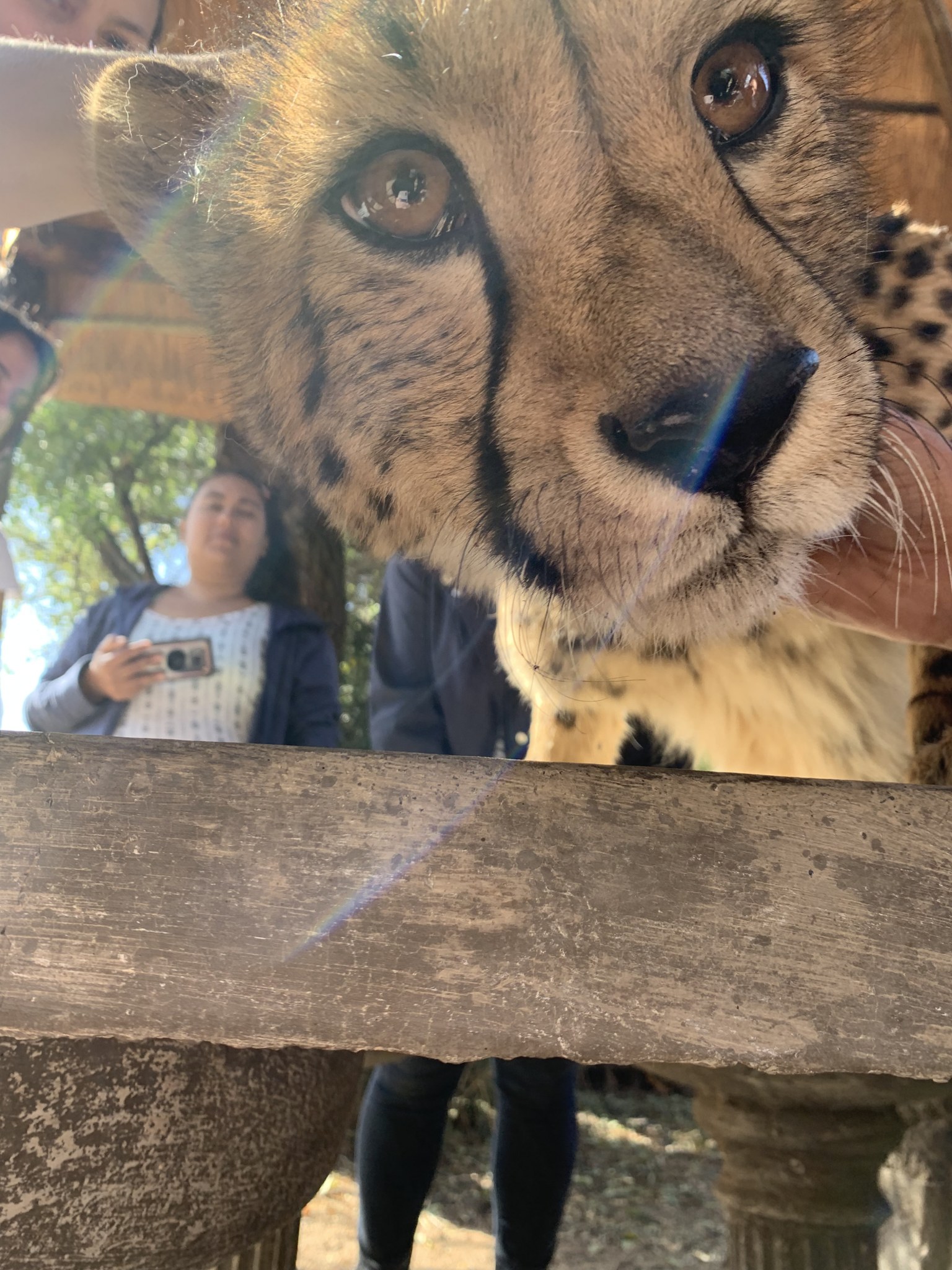 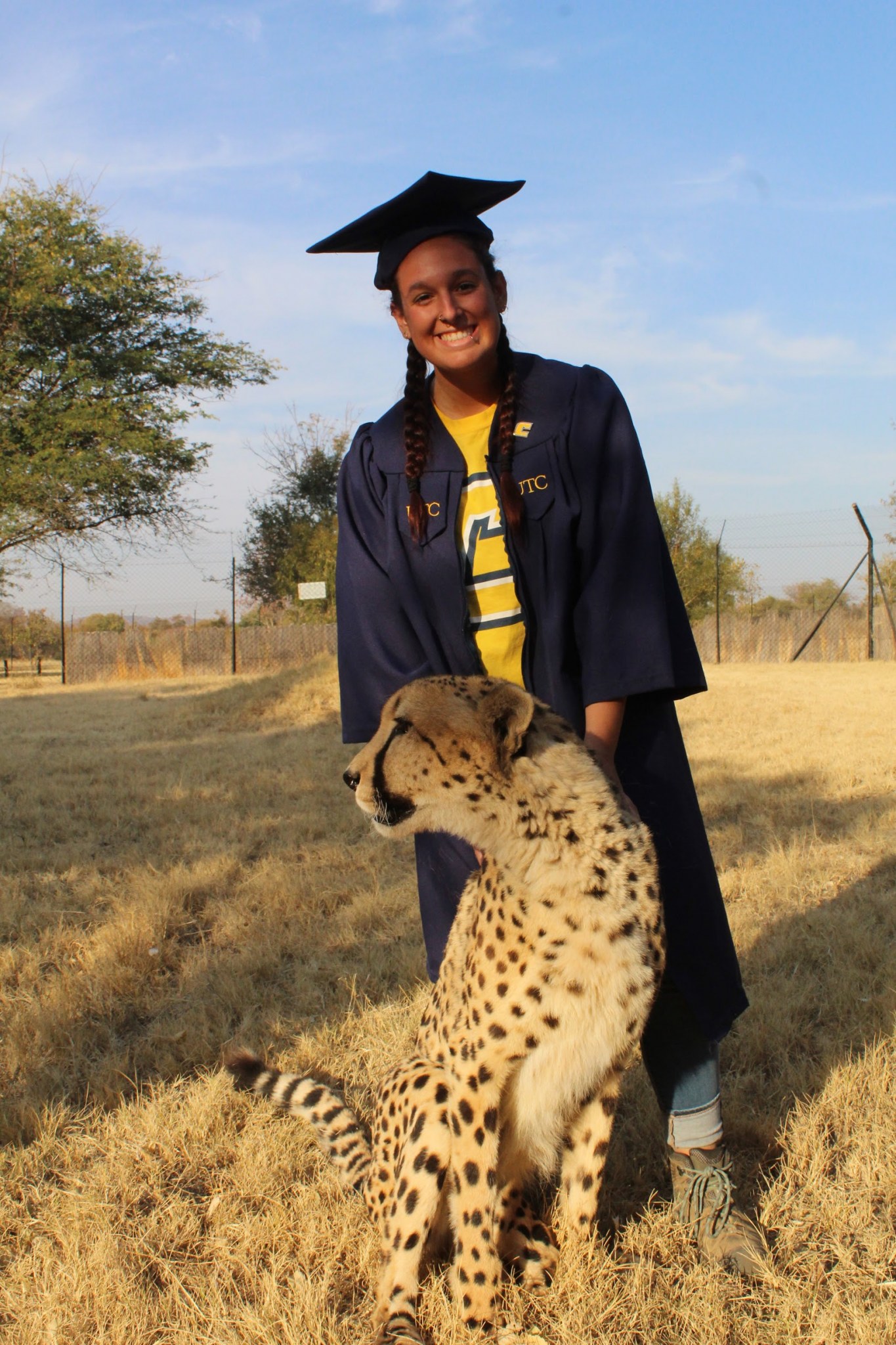 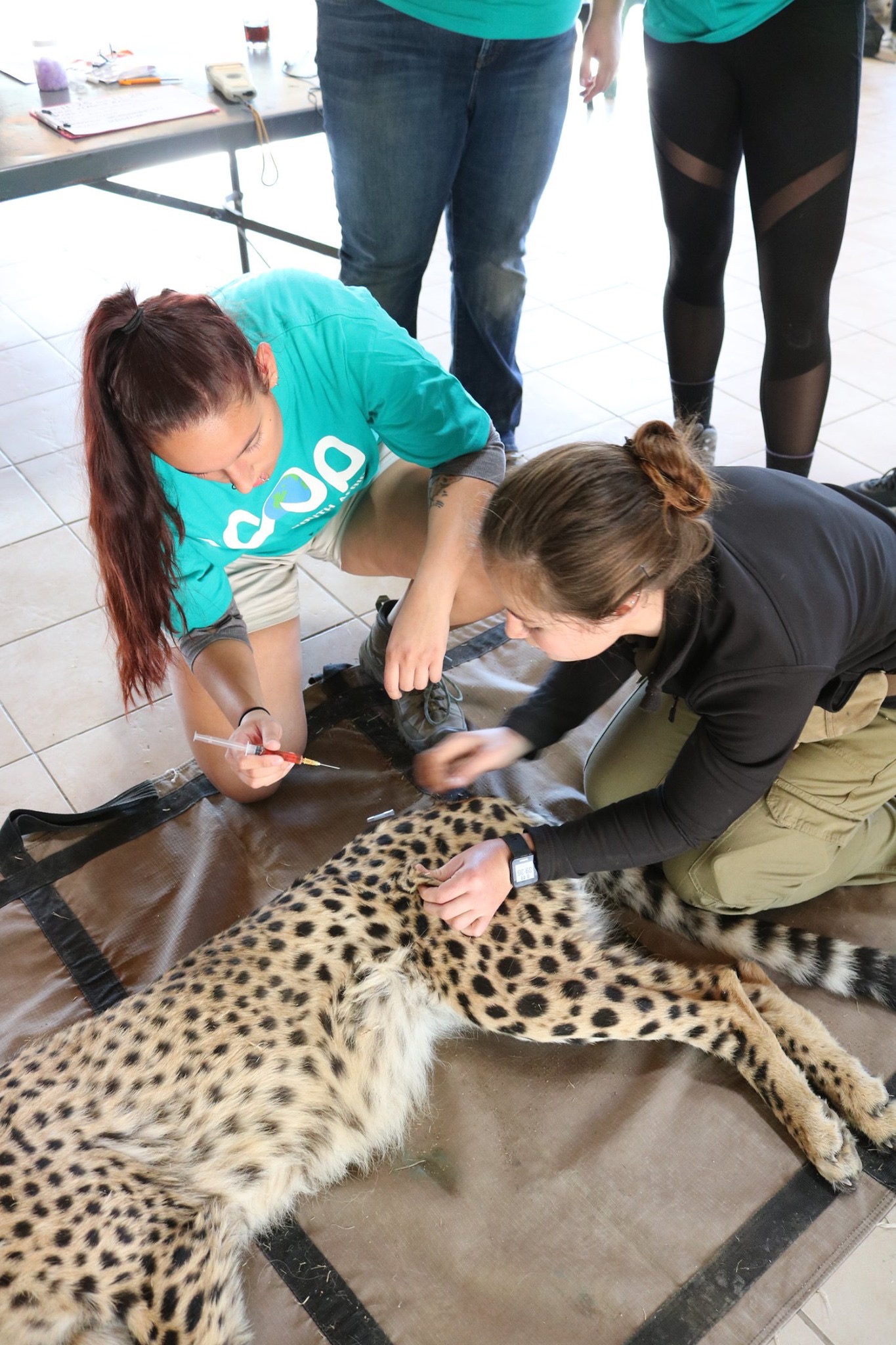 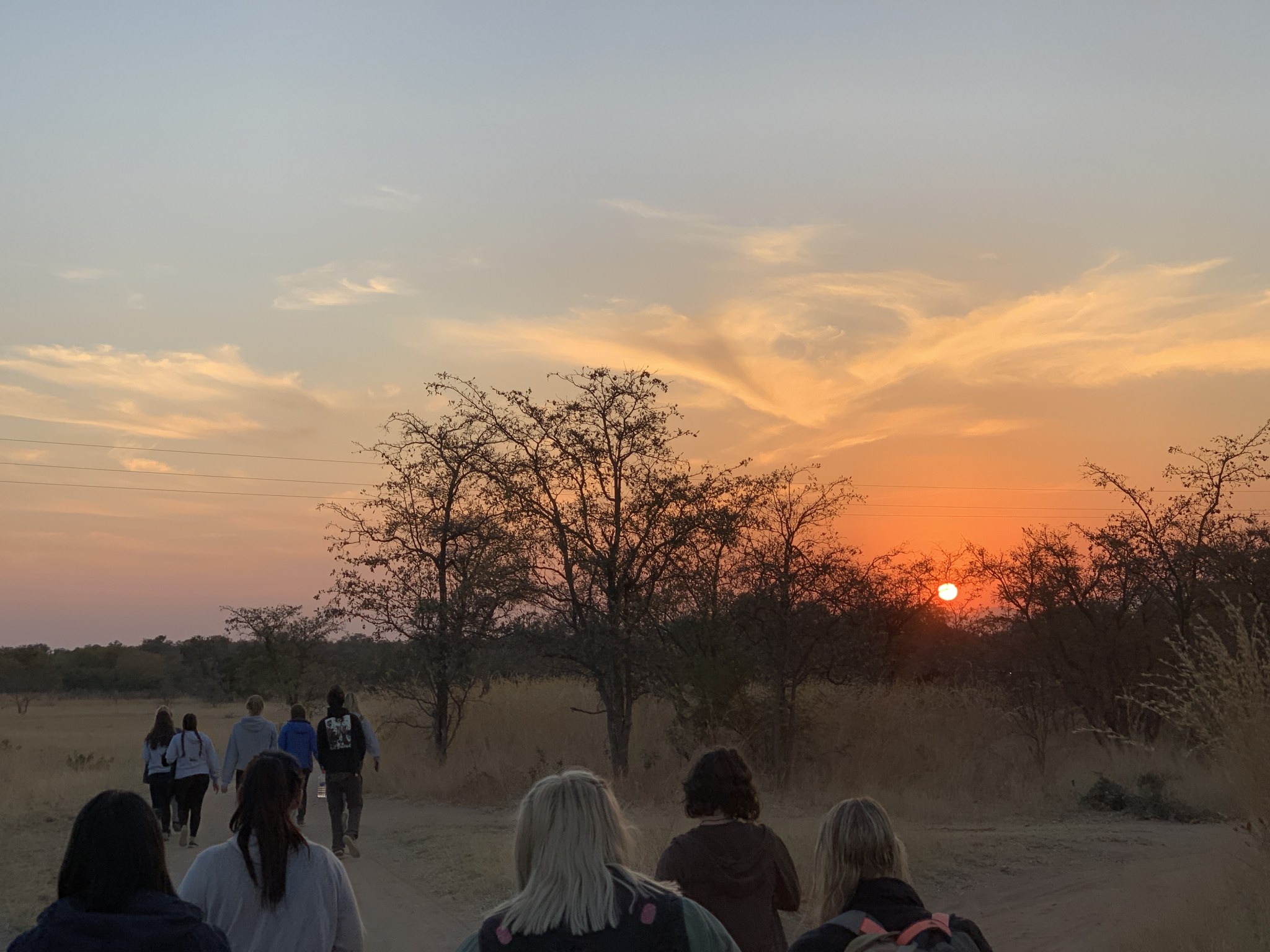 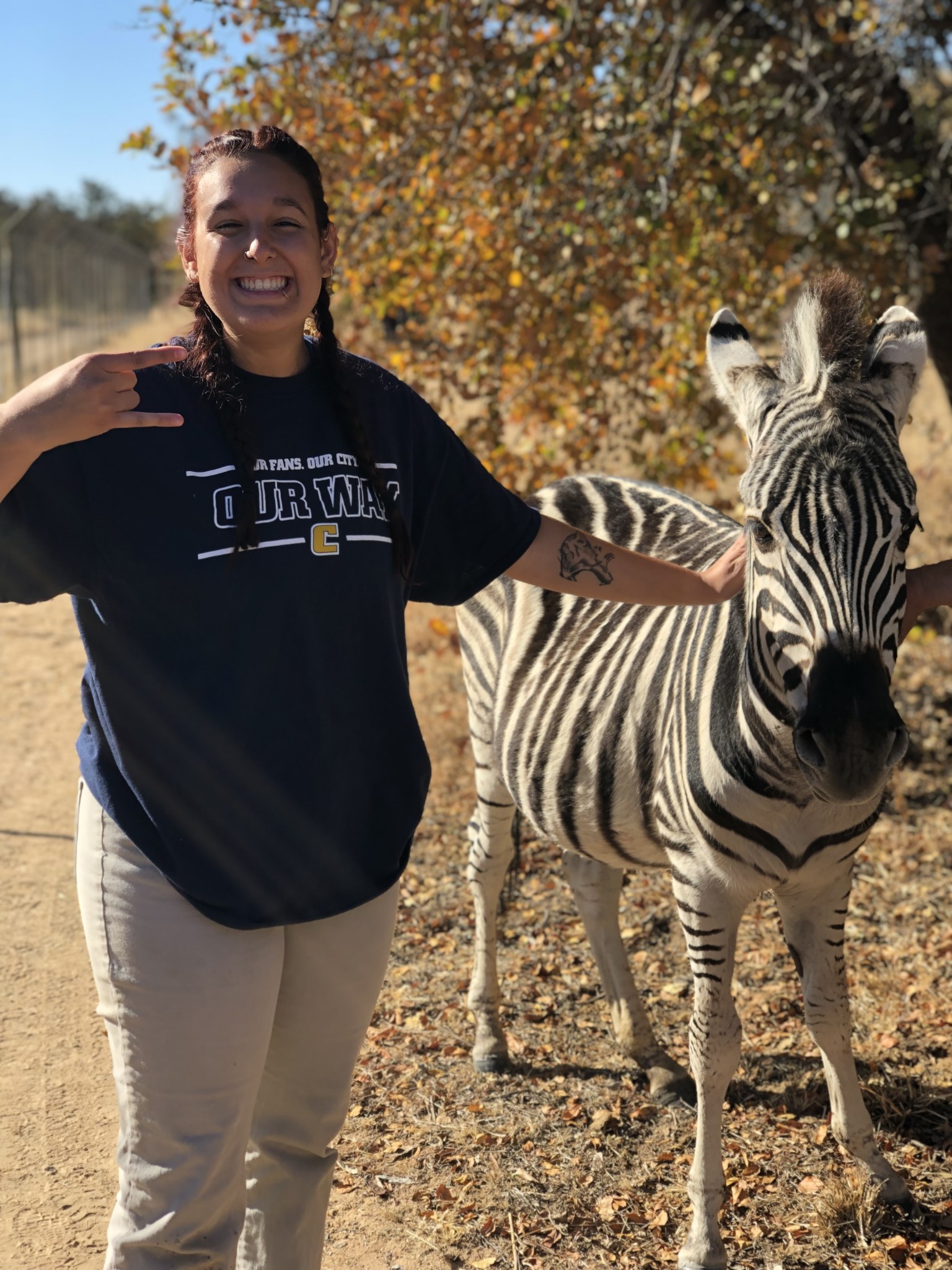 As much as I’ve heard that every study abroad experience is unique, I know that mine was one of a kind. How many people get to say they were face to face with a cheetah? The answer is not a lot so that is just one thing that made my study abroad experience unique! My program was through Loop Abroad who partners with Iowa Wesleyan and their programs were exactly what I wanted to get out of a study abroad program. I wanted to go beyond the classroom and get real hands on experience that would help me with my future career, whichever path I decide to pursue.

I had previously looked at a different program that I thought was going to be what I wanted, but after reading through the acceptance letter and all of the material for how to prepare, it just did not sound like it was going to be what I wanted and that I wasn’t going to get the experience I wanted out of it. After keeping my options open and doing more research on different programs, I remembered a group I had followed on Facebook for years and I thought it was a scam, but after a lot of consideration and phone calls and emails, I decided to give it a shot and spoke to the study abroad advisor about it and it was the program of a lifetime.

The traveling wasn’t too bad, just long flights. The first flight was fourteen hours from New York to Kenya, the second flight was four hours to Johannesburg, and then we had a three-hour bus ride to Feracare Wildlife Centre which was where we stayed for majority of the two weeks, the exception being the safari in Kruger National Park. Staying on the wildlife reserve was different for me because honestly I have never not had cell service and I’ve had mostly reliable wifi so being six hours ahead and not being able to be in constant contact did make me a little stressed but there was really not a whole lot of free time nor did I want free time. 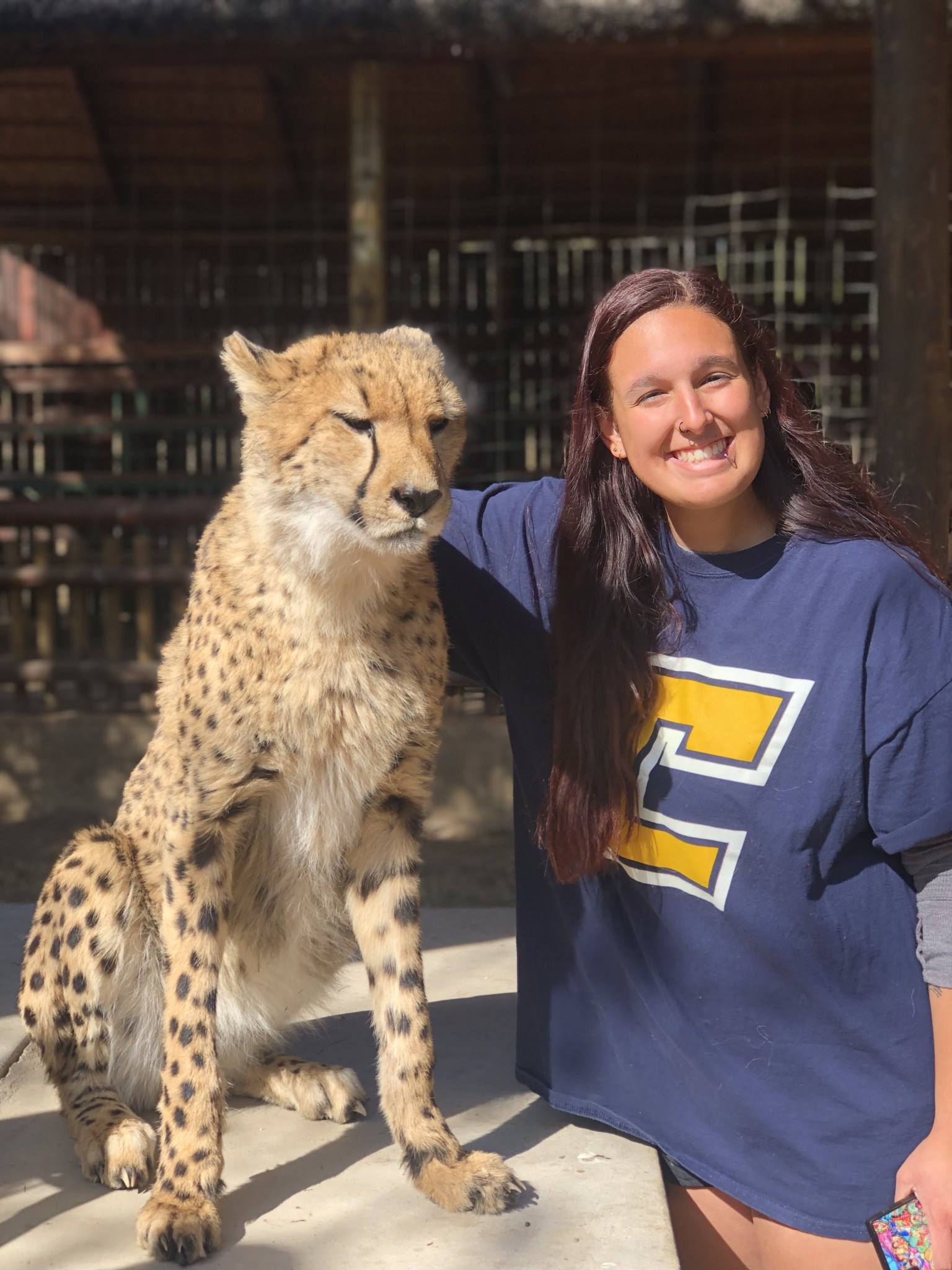 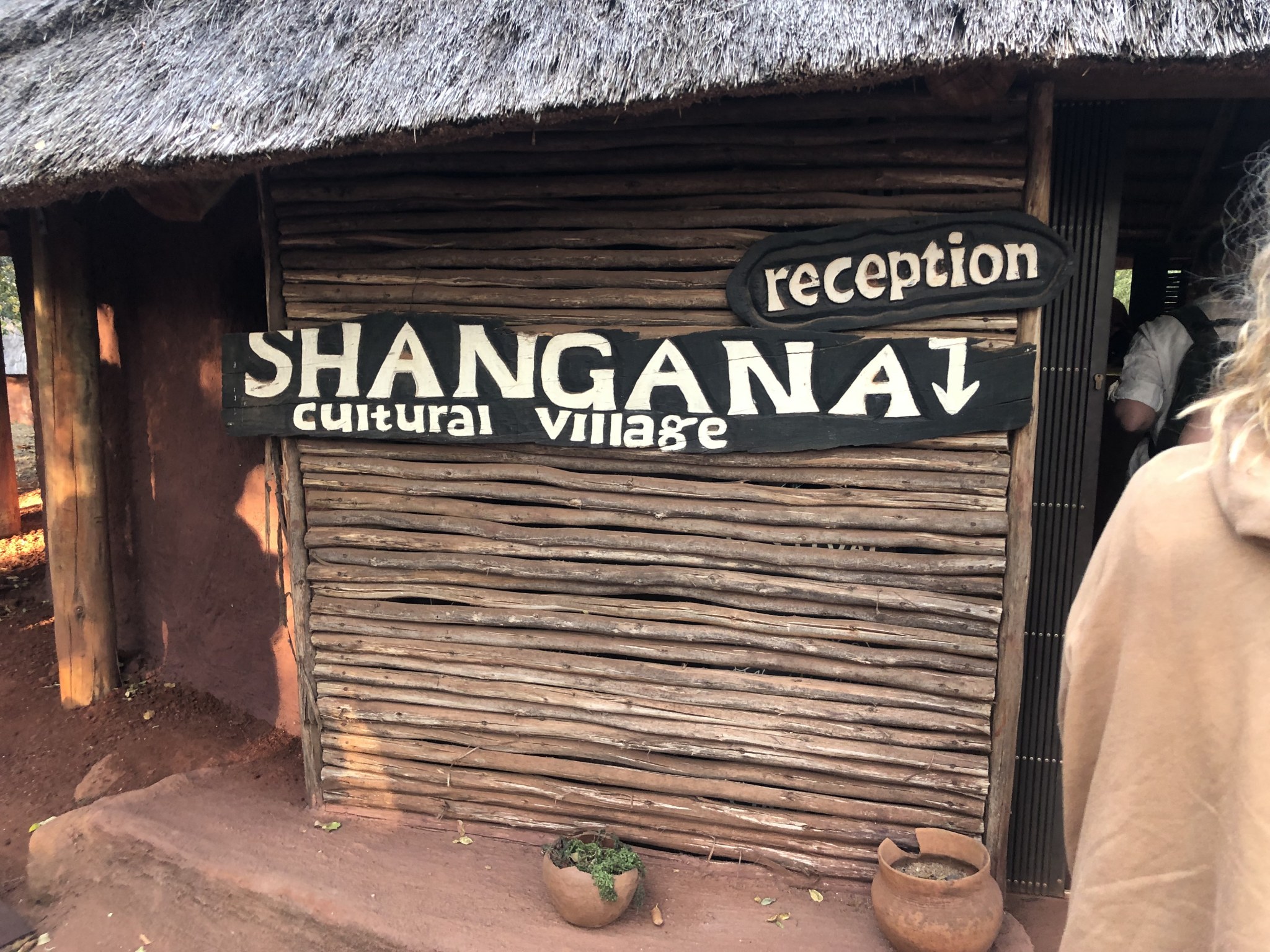 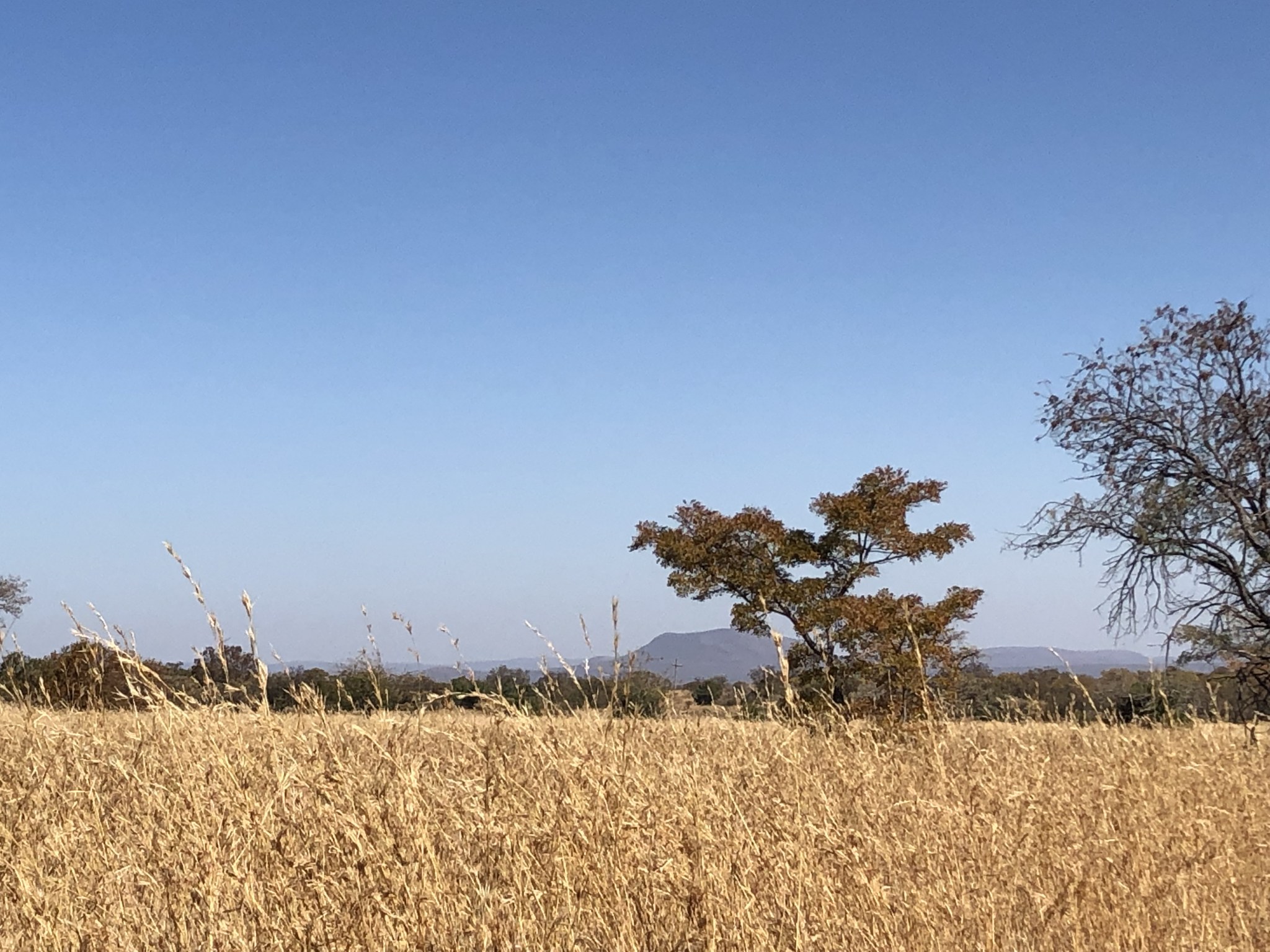 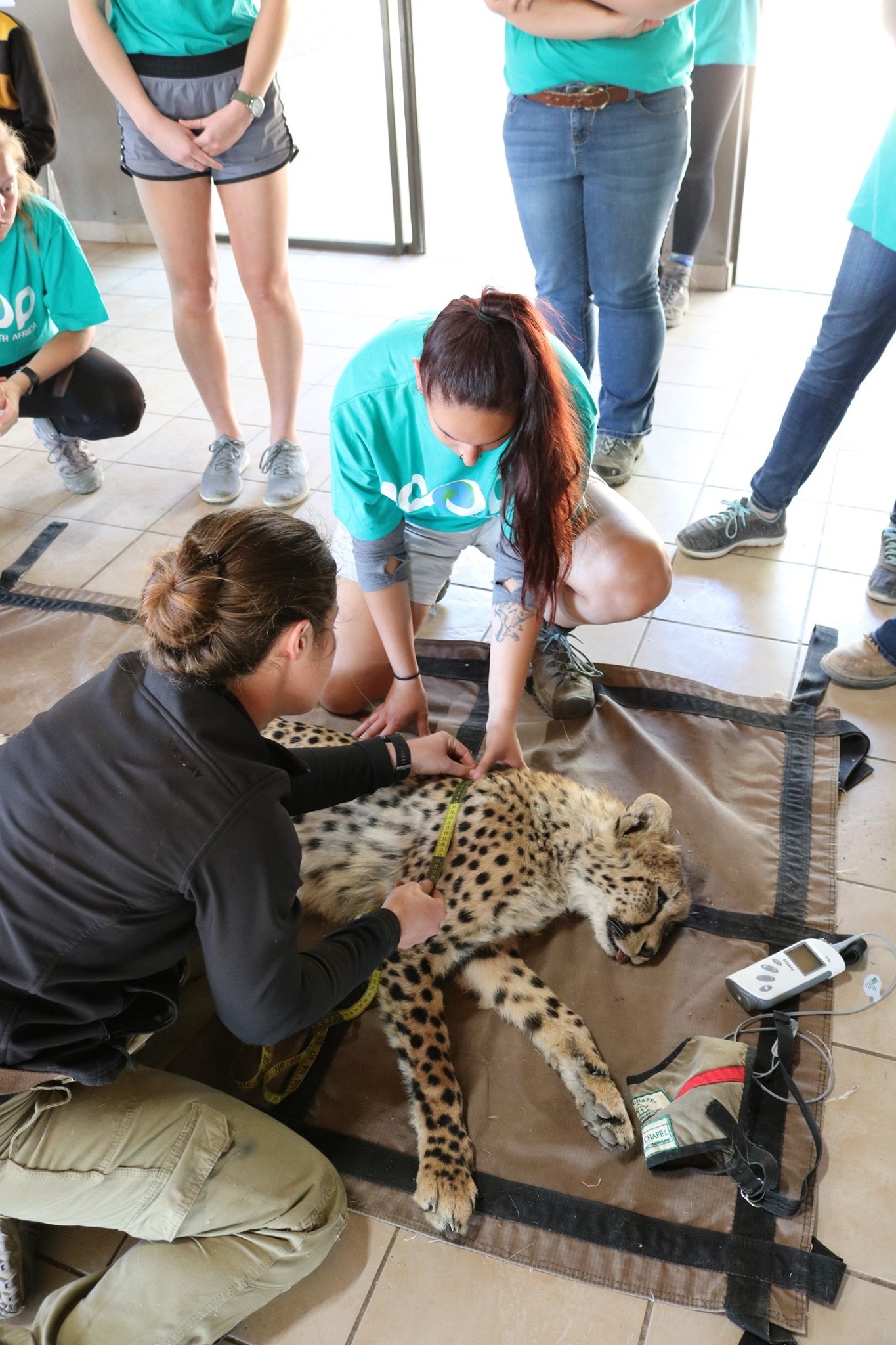 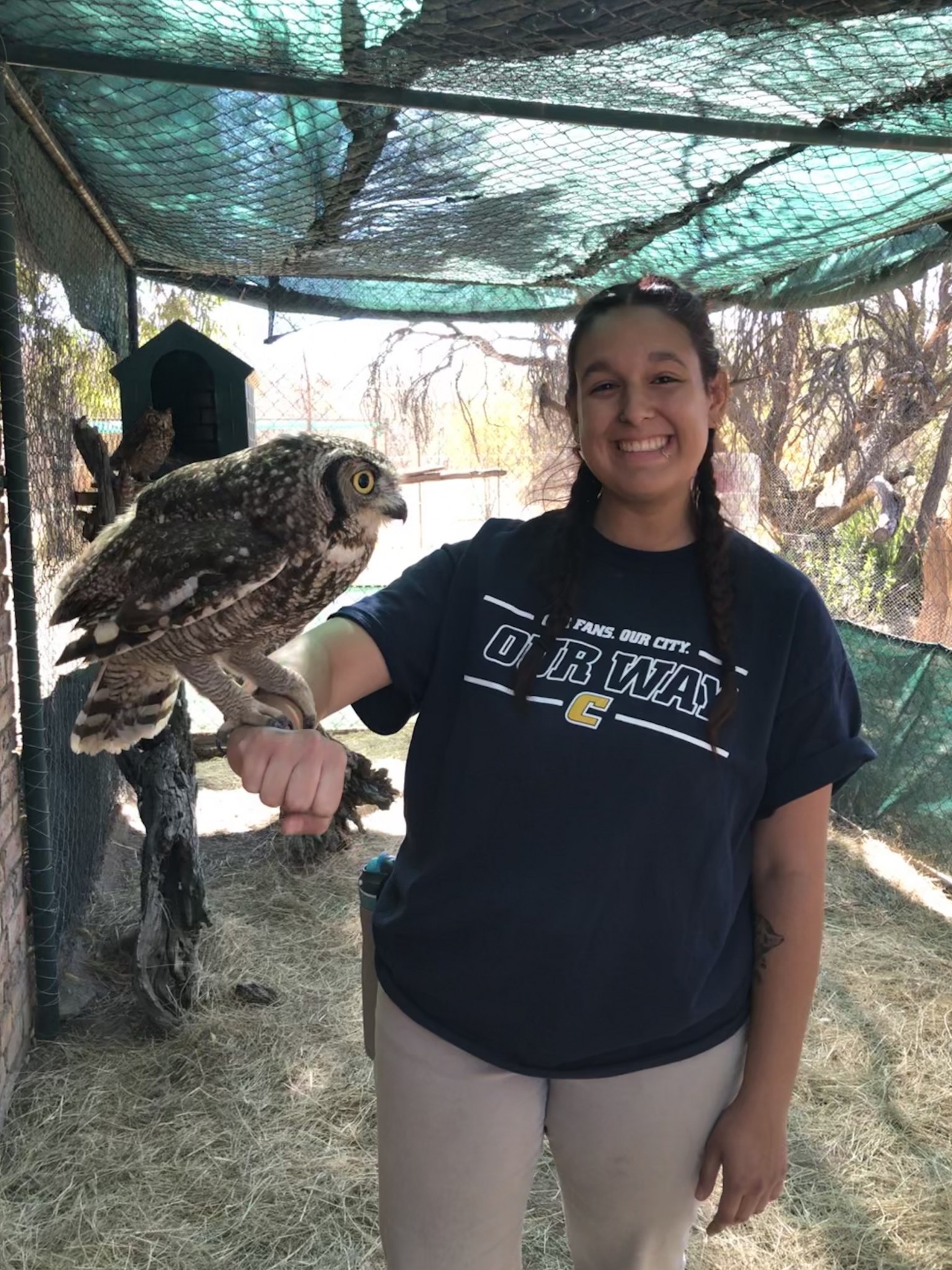 A typical day consisted of “helping to do chores” which for the students we not only did to help the staff at Feracare, but it was a way to learn how one takes care of fifty-one cheetahs to help contribute to the healthy growth and survival of the cheetah species. The chores rotated everyday so one day we would be assisting with thatching, which was when we put up patches of grass around the mother cheetahs’ camps to provide them privacy as well as their cubs. Another day we would be assisting with fire breaking, so we would clear everything (grass, bushes, trees, etc.) from the fence to at least four feet back to slow a fire from reaching the camps. The last chore was always everyone’s favorite chore because we assisted with feeding the cheetahs, so some we would go in with and tell them “sit, look away” and then place the bowl down and rub their backs to kind of get them used to touch for something like a topical treatment for fleas, some we couldn’t go in at all and had to use gates to push the bowl of meat under.

After chores, we ate lunch for about an hour and then we had our lesson which were all different every day. Some lessons that stuck out to me the most were cheetah genetics, breeding in captivity, and a lesson about safely taking down animals in the wild and the successful release of these animals as well as suturing techniques. The day that really stuck out to me the most was having the local wildlife vet (and when I say local I really mean at least an hour out) come out for DNA testing of three cheetahs, two males and their mother, to be able to use their genes in future matings since their genes were very genetically diverse. The vet really handed things off to us so we collected swabs from the cheek and rear, a fur sample from the tail, took measurements of the length of the cheetah, took the weight, as well as vaccinated them. Being that close to a cheetah even while under anesthetic, was still scary because with wildlife medicine and any medicine, there is just a greater risk for complications when you put something under.

We went on a weekend overnight safari to Kruger National Park as well as had a cultural night and visited the Shangana village, where the people still live very traditional lives. The safari was a sunrise safari so it gave off very Lion King vibes, and it was a dream come true for me as a safari in Africa has always been something I want to do. Overall, my experience was amazing because I got to learn from five different wildlife veterinarians and gain hands on experience working with cheetahs since working with big cats is what I want to do in the future. I would highly recommend Loop Abroad to anyone who wants to go to vet school or who wants to get their vet tech license because of the hands on experience with wildlife!

Madison Himes is majoring in  Biology (general) and studied abroad in Summer 2019 in South Africa with Loop Abroad. Madison had the following to say about studying abroad, “Studying abroad for a semester has never been something I wanted to do so a summer program was perfect for me! It was also something I never thought would be possible for me, but as long as I kept up with the deadlines and did everything that was required from the study abroad office, it became a reality. Each study abroad trip is unique and it’s an opportunity to immerse yourself into a different culture and really find out a lot about yourself.”