Continue to Remember the Magic: University of Ulsan Fall 2019 and almost Spring 2020 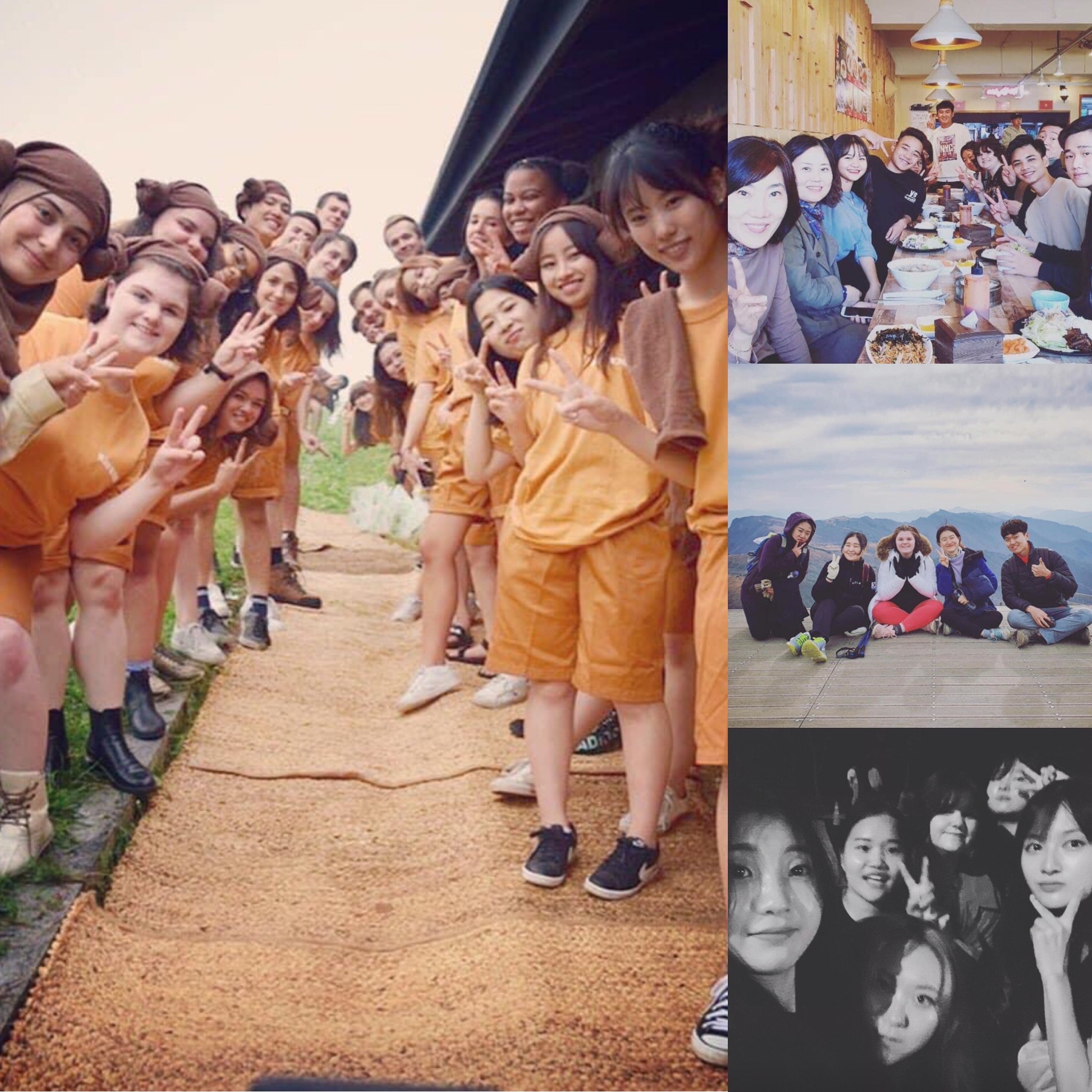 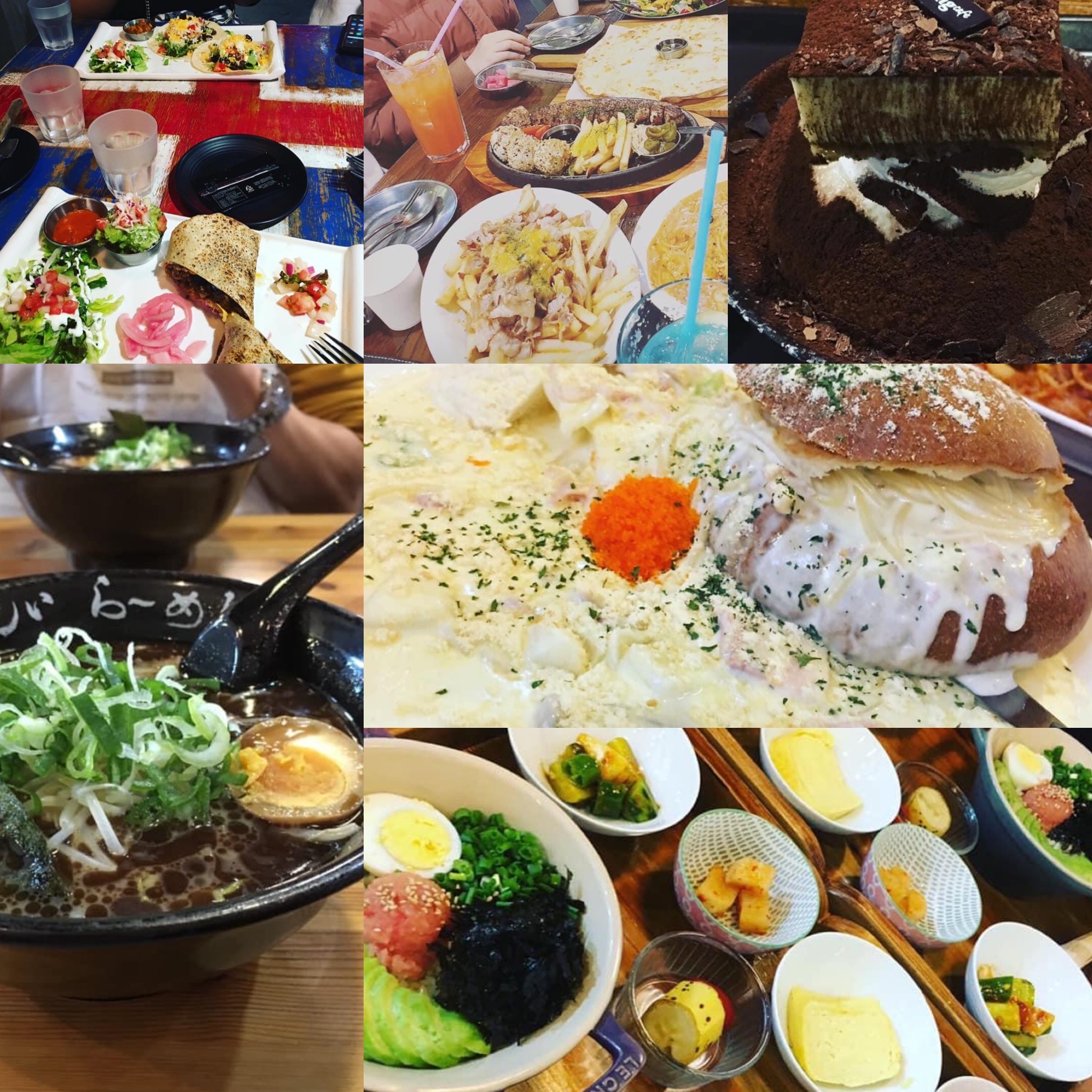 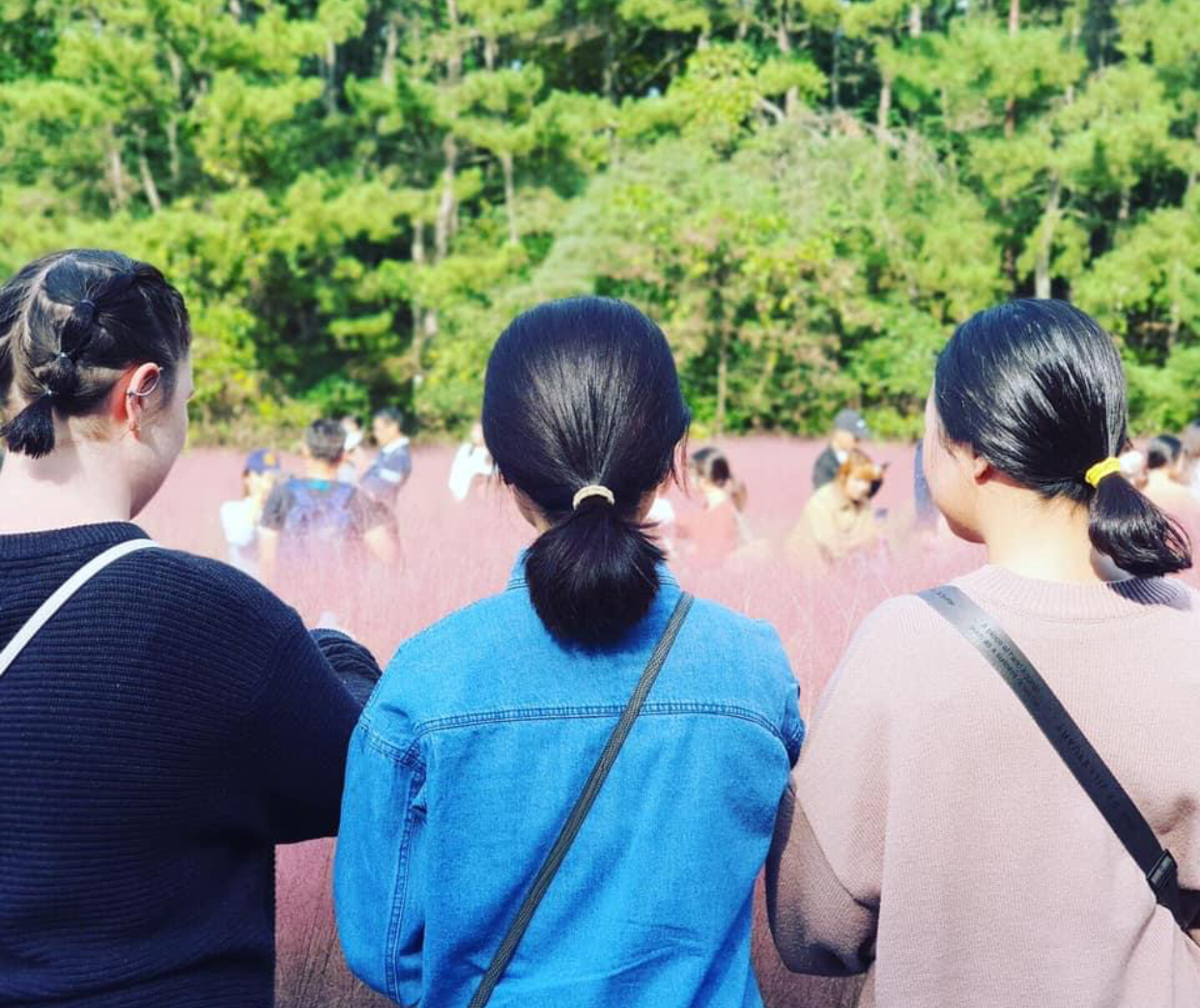 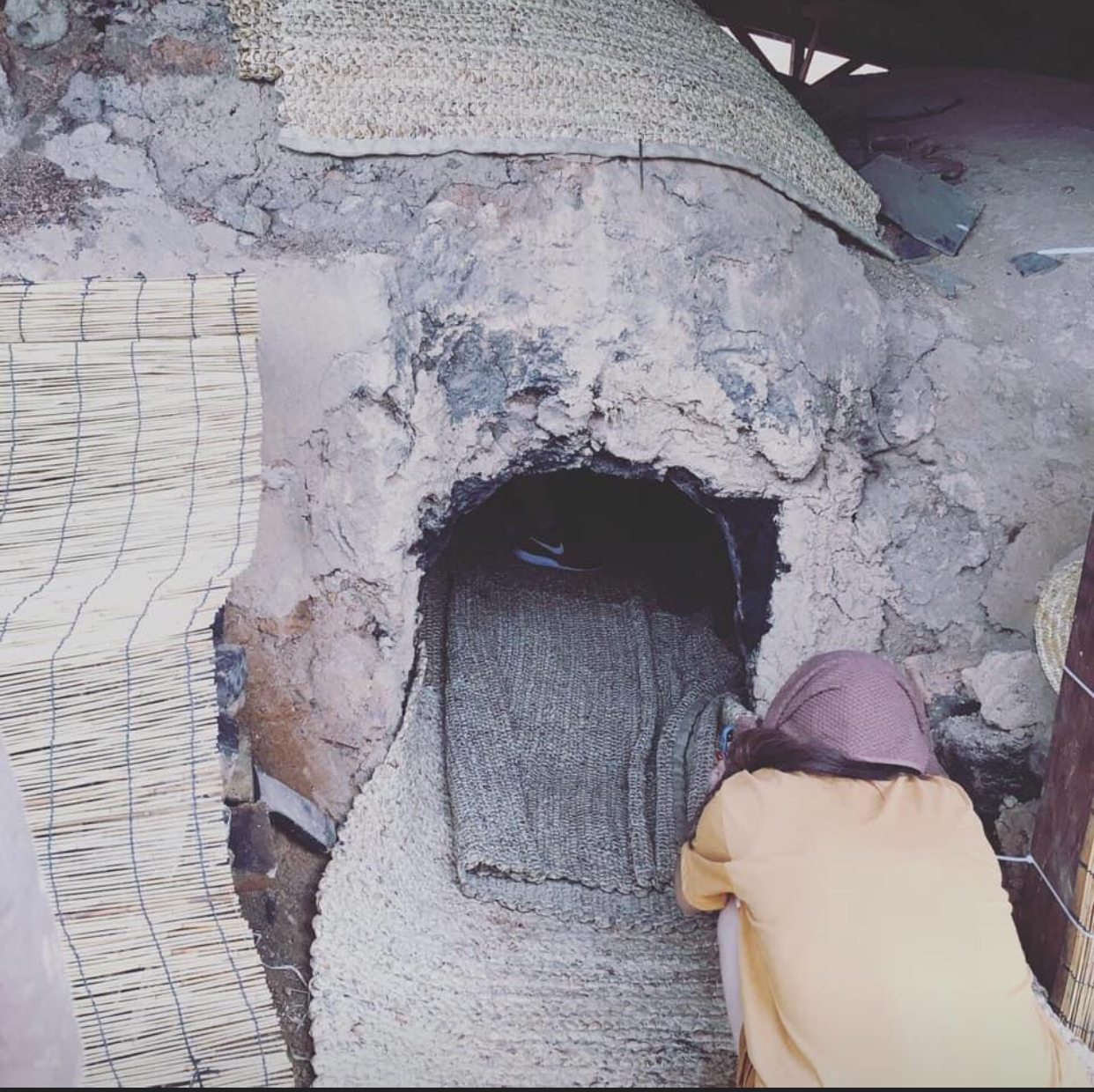 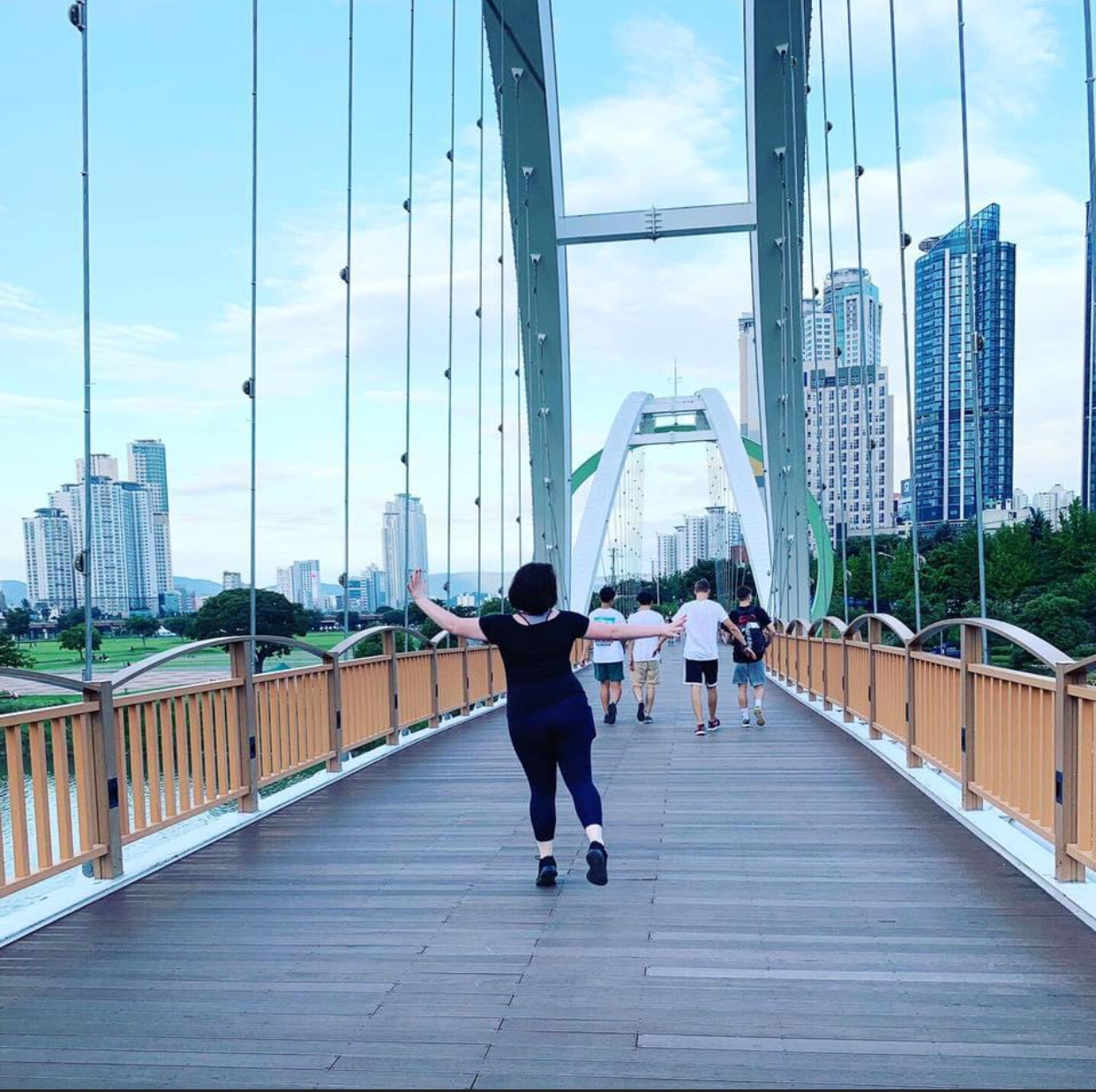 My undergraduate study abroad began in Ulsan, South Korea. This is where I first dipped my feet into experiencing a different culture and language. Throughout this study abroad there were many unique challenges I had to face being that I was majorly introverted. I did not let this side of me stop me from adventuring out into the world and this is when I went on my second study abroad journey to China. I feel like throughout this experience I grew even more as a person. I realized how to adapt to many different situations that I faced with other students like myself. Now that I am in my senior year even with a few bumps in the way, I had chosen to spend my junior year in Ulsan, South Korea where this adventure had first begun. The lasting memories I made on this trip will never be forgotten. Here I met the best roommate of my life who is now a lifelong friend, and I met so many kind and generous Korean friends who I plan to keep in touch with and meet up with again in the future.

Before COVID 19 began, I was meant to spend fall 2019 and spring 2020 as an exchange student at the University of Ulsan. I was still set to begin studying during the spring 2020 semester until the day before classes started. This is when the Department of State travel advisory rose to a level four here in the USA. I will let you know more about how my almost spring 2020 semester went but for now, let’s begin with the best fall 2019 semester I could have experienced.

Of course with my nerves, I had gotten to the airport about an hour too early for an eight am flight. At the airport, my mom and I argued before I left on a twenty-four-hour flight including stops at Atlanta, Japan, and Busan. Around 9 pm I took an airport bus from Busan to Ulsan which would be around an hour long bus ride. The University of Ulsan does not have airport pick up so you will have to find your way from whichever airport you are coming from, but most people coming from Seoul take the KTX at Seoul station. The university sends out transportation information beforehand so that you can choose the best option for your budget. Once arriving the English-speaking intern(s) will help you take your stuff to a temporary dorm and then the weekend before classes start, they will take you to the international dorms for the semester. They issue temporary elevator cards until they can scan your fingerprints to use the elevator. Within the first week before classes start, they have an international orientation and you will file for your Alien Registration Card (this you will get in about a month after they take you to get your fingerprints done again at the immigration office). After you get your Alien Registration Card, you can file for a bank account: if they owe you any refunds, they can then put it into that bank account. 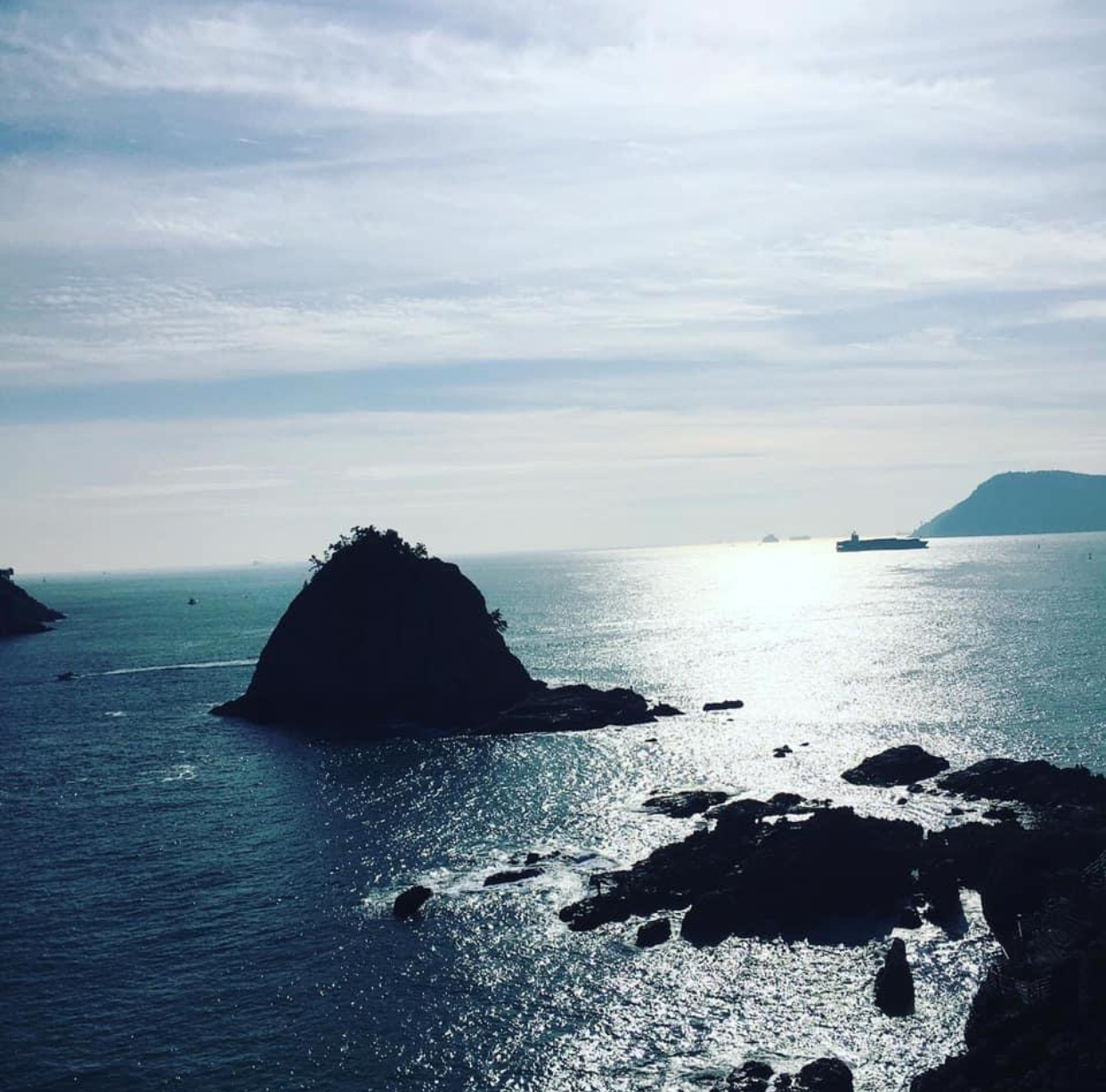 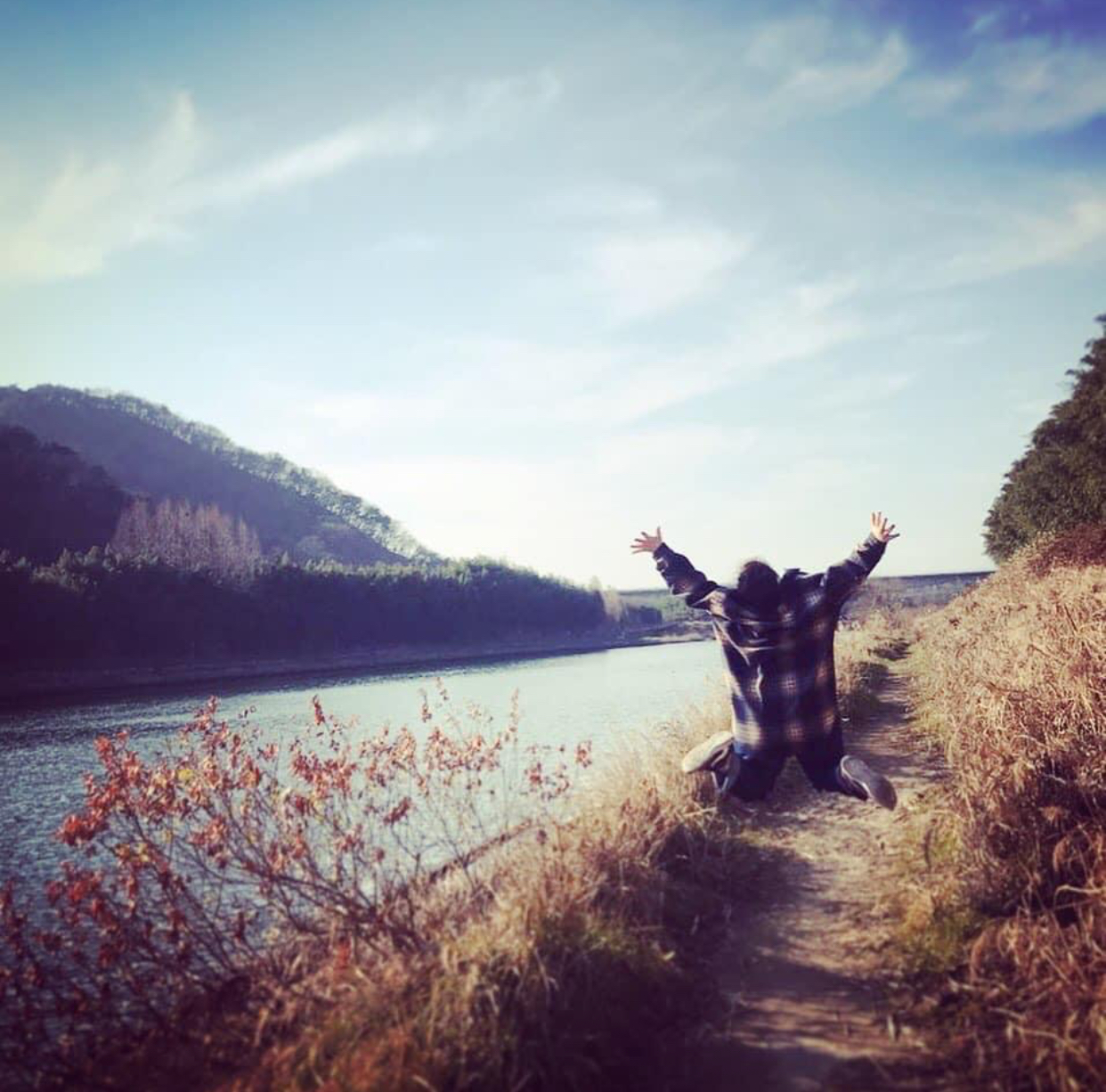 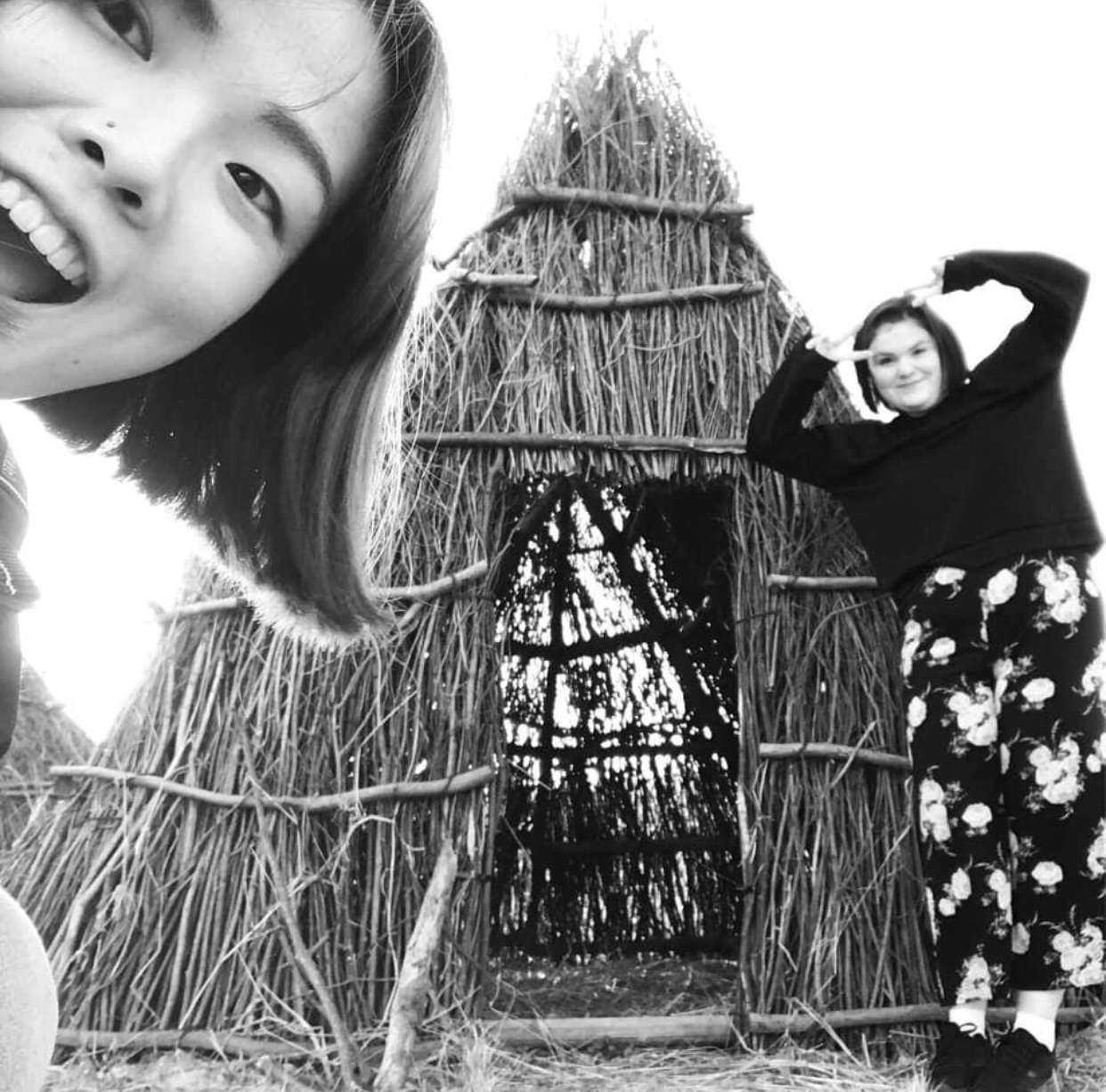 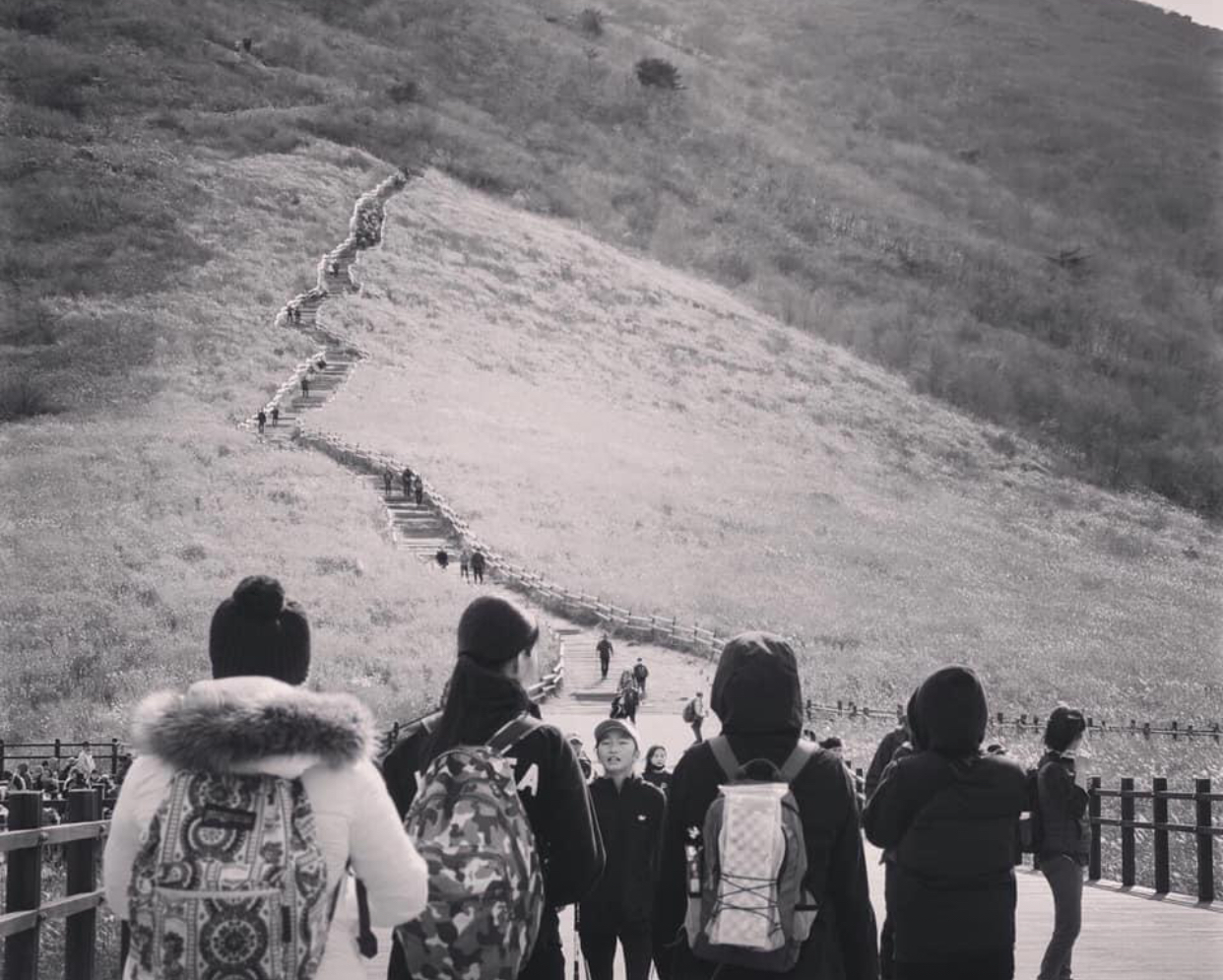 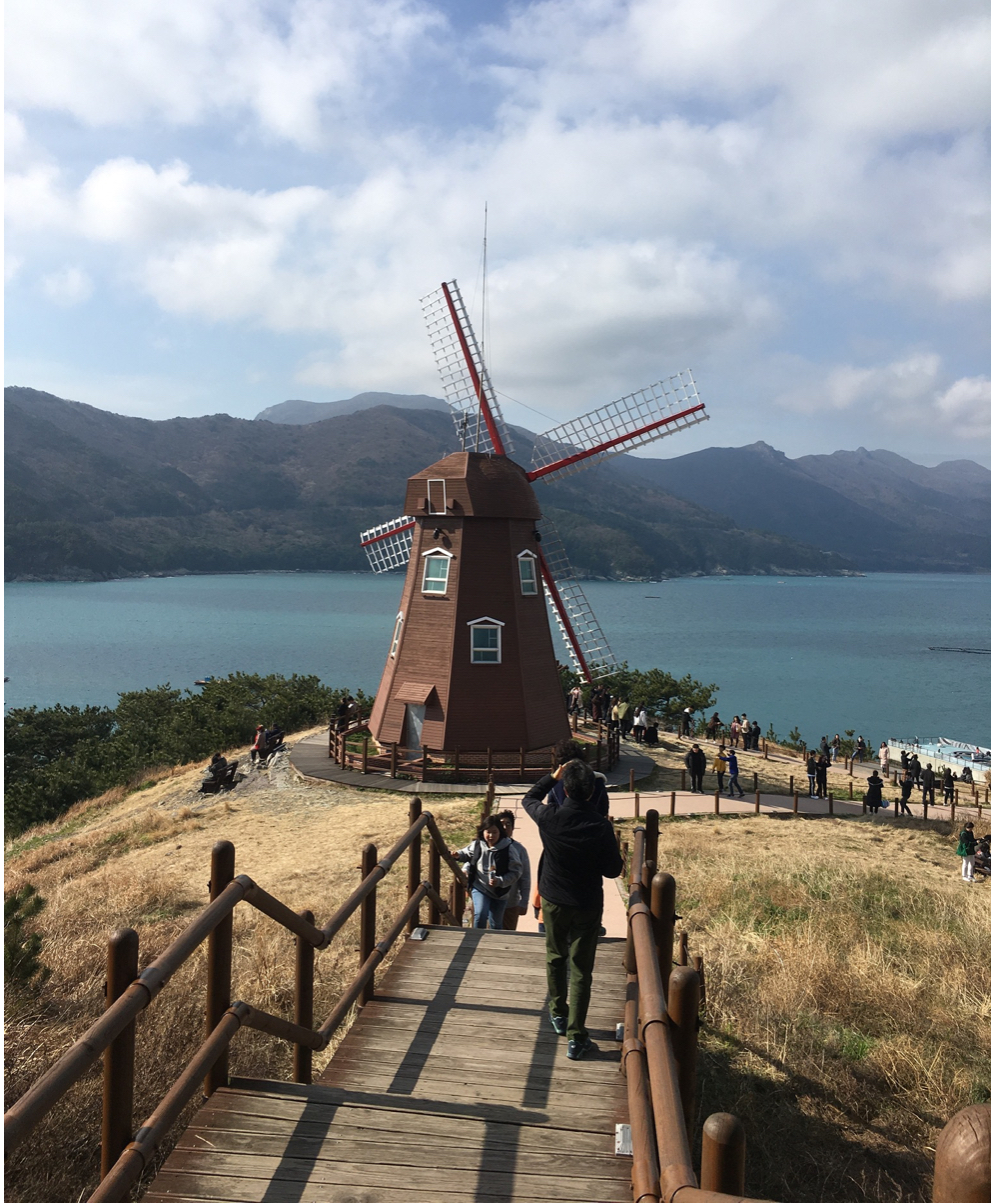 The university also has a scholarship program that they call LaTU. In LaTU exchange students who are native English, Chinese, Japanese, and Spanish speakers tutored Korean Ulsan University students in that language. Each tutor gets one or two groups of three or five students to tutor for ten weeks. You will spend three hours a week with each group. After a very short amount of time, I knew that they mainly only needed help with practicing conversation material, so we were then able to do many things together instead of just sitting in the library studying. With my LaTU groups, I was able to eat dinner with them, hike an entire mountain (around 11 miles total up and down), picnic, ride bikes, and much more. If you could join the program, I highly suggest you do it because with my LaTU members they introduced me to Korean culture and they also knew all the best places to go.

But soon this will all come to an end when we heard of the beginning of Covid 19 and social distancing began in January (this was the beginning of my winter break). We social distanced from January to March. Even now things are just starting to open back up. The university continued to delay classes even into March. Out of the seven months I was in Korea, I spent three of them in what was isolation. The university fog disinfected the dorms around three times in those three months. Also as international students arrived from break, they were kept in a separate dorm from those who had stayed during the break. In Korea, if you did not have your mask on when you were outside it was kind of weird because there was not a person the entire time without a mask on while in public.

On March twenty fourth with only a three-day warning, I headed home. Airports were not as strict as I thought they would be, but I was met with family that was a bit scared of me at first while being very excited that I was home. I stayed only with my immediate family for two weeks. Not only was I going through the culture shock of coming home, but I was also going through what would be America’s new norm. In the end, it had been the most wonderful growing experiences of my life.

Hayley Edde is majoring in International Studies and spent Fall 2019 and part of Spring 2020 studying abroad in Ulsan, South Korea through UTC’s exchange program at the University of Ulsan. Hayley had the following to say about studying abroad, “During the beginning studying abroad is something new and almost magical, but in the end remember that this journey continues so do not lose the magic. Make every moment exciting and new because there is always a new country, a new language, and most importantly the beginning of your own something new.”