Nestled near the Walnut Street Pedestrian Bridge and Hunter Museum for American Art is a structure that looks very similar to a large Chinese lantern. That lantern is actually a public arts installation created by members of the UTC community and a local arts organization to honor Chattanooga’s history. 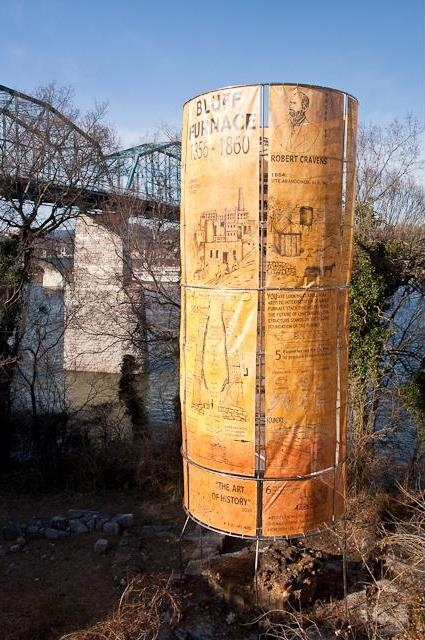 The location of the art installation, located near the Bluff View Art District, west of the Hunter Museum, off the serpentine path of the Tennessee Riverwalk, originally housed a charcoal fueled/steam-powered blast furnace built by iron master Robert Cravens in 1856.The furnace produced raw iron for use in local foundries until it was converted into a lime kiln after the Civil War. The site was excavated in the late 1970s by UTC archaeologists. The Chattanooga Parks Foundation built a full-size metal replica of the original blast furnace on the site in 1994.

“Mark Making thrives on partnership because our mission is to empower the ones doing the project,” Katherine Smalley, executive assistant at Mark Making and UTC alumna, said. Mark Making has previously worked with area elementary school students, homeless population, and people with disabilities.

“Once we started inquiring about the possibility of hanging paintings on the metal structure, we discovered more about its history, and we wanted to keep following that track,” Smalley said. “We aimed for a visual interpretation of the site’s history.”

“We want to make this history accessible to many people, in a way that not only is educational, but also reflects on and adds to Chattanooga’s riverfront” Lindsay Roden, a UTC student, said.

Frances McDonald, the executive director of Mark Making, recruited Dr. Nick Honerkamp, Professor of Anthropology and Director of the UTC Archeological Institute, and several UTC students to assist in the project.

The project took four months to complete, beginning in August 2010 and finishing on New Year’s Eve. Volunteers constructed over 1,300 square feet of painted vinyl to hang on the metal structure. The vinyl is painted with a timeline, historic facts, and photographs on an industrial inspired color scheme. The installation will be up for at least a year with hopes of extending it to five years. Mark Making is in charge of maintaining the structure.

“It was a unique experience to offer my students,” Nick Honerkamp said, “”When I think of archeological interpretation, this took it one step beyond anything I’ve ever done. It beats a book. It beats a sign. It beats everything that you can come up with just because it’s so dramatic.”

To learn more about the project, visit http://blufffurnace.blogspot.com