Described as “a beautiful concrete stadium with an exterior of brick and stone in harmony with the other buildings on campus” in the 1928 University yearbook, bittersweet feelings surround campus as South Stadium is dismantled, nearly 84 years after it was constructed. 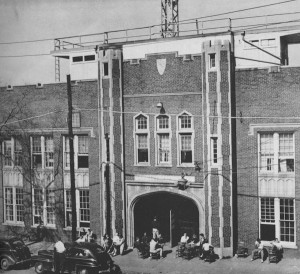 South Stadium is the last remaining structure of Chamberlain Field. The field was the football stadium for the Mocs from 1908 to 1997. Before that, the field had been used by Chattanooga Transfer Company as a horse pasture. The field was named in honor of Captain H.S. Chamberlain, who served as president of the University Board of Trustees for 25 years and Morrow Chamberlain, who was an active supporter of the project.

South Stadium was built in 1927 after a member of the local Kiwanis club proposed the need for additional seating for sports games. During the spring of 1927, the old wooden stands were torn down and new ones that could hold 5,000 Mocs fans were built. The stadium, which cost $67,000 to construct, was dedicated on September 24, 1927, before a game against Vanderbilt University.

In addition to providing seating for athletic events, South Stadium has housed a cafeteria, student common areas, classroom space, and dance studios. While Chamberlain Field was used mostly for athletic games, coaches and professors also used the space to teach lessons as described by an anonymous columnist in the March 15, 1912, edition of the University Echo.

The male student (who was also on the University’s baseball team) was loudly celebrating the end of the semester with the rest of his teammates in their dormitories when football coach Leslie Stauffer and professor John Fletcher stopped the celebrations with an ominous message, “We will show you the difference between work and play.”

Later on that day, the team was called out to the field and ordered to work until late into the night. The columnist wrote, “That night as the sun sank … we laid aside our tools. Chamberlain Field lay before us as level as a house floor and as smooth as a pane of glass. We looked at it, at our blistered hands. The work was done.” 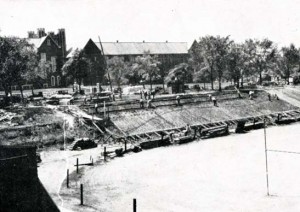 The students walked back to their dormitories and ceased their loud celebrations. The student continued, “The next morning a huge placard was seen posted out on the campus. It had upon these words: ‘Resolved. We know the different between work and play.’”

Others have more fond memories of Chamberlain Field. “I spent more time on Chamberlain Field than anybody at that time. I practiced every day for two hours. I felt like I lived there,” Rodney Allen, a UTC alumnus. Allen was the kicker for the Mocs football team from 1989 to 1992.

“I used to kick balls over the fence and break the windows of the former math building.  Professors would yell at me for disturbing their classes and eventually the University had to replace the windows with plexiglass, but the field meant a lot to me. I’ll never forget my time there,” Allen said.

“Chamberlain Field had its quirks, but they gave us a home field advantage,” said Bert Caldwell, a UC alumnus who played on the Mocs football team in 1962-1964. “One end zone was affectionately called ‘the bullpen’ because it just dropped off. It caused a lot of linemen to stumble and fall. The other end zone had a slope. If you ran too far, you would eventually hit a wall.”

One of Caldwell’s fondest memories involved a lucky find after a tough game. “During a game, I fell down hard and one of my glass contacts popped out. After watching the game film, I was able to go back the next day and find it. I couldn’t believe it,” he said.

The field became well known for its quirks, which included flooding on one end of the field and cramped seating. In the May 8, 1925 issue of the University Echo detailed improvements made to the field, joking that the athletes “don’t know whether to consider it an optical illusion, or too many ice cream sodas. Row boats with specially made oars will no longer be necessary.”

The newspaper also joked about the bleachers, writing, “Once the game is over, you cautiously move your cramped body, and make ready for the descent. Not having the skills of an alpine climber, you are helped by friends and compassionate onlookers.” The University replaced the bleachers with aluminum seats in 1970.

As the University moves forward to construct new facilities, an effort to remember the past and preserve memories of Chamberlain Field is also underway. According to Janet Spraker, UTC Director of Engineering Services, the entrance sign and bricks will be used to construct the new Chamberlain Pavilion. The pavilion will be located near the new library. 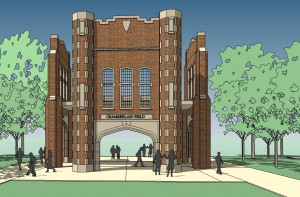 “Seeing Chamberlain Field come down is certainly bittersweet for all of us here at UTC. As both an student and alumnus, I remember when we played at Chamberlain. Many memories have been made at Chamberlain, and I believe our plans to dismantle the building and salvage as many materials as possible for inclusion in the new Chamberlain Pavilion is a fitting memorial to such an important campus landmark. It will give Chamberlain new life on our campus,” Chuck Cantrell, UTC Assistant Vice Chancellor for University Relations, said.

To watch the dismantling of the stadium live, click here.