Fisher is a UTC Brock Scholar and the incoming Student Government Association President.  He spent the summer in Washington, D.C., as an intern for the Center for American Progress, following his acceptance into The Institute for Responsible Citizenship’s prestigious summer leadership program.  Fisher and his student colleagues met with lawmakers and asked for a resolution to the student loan interest rate problem. 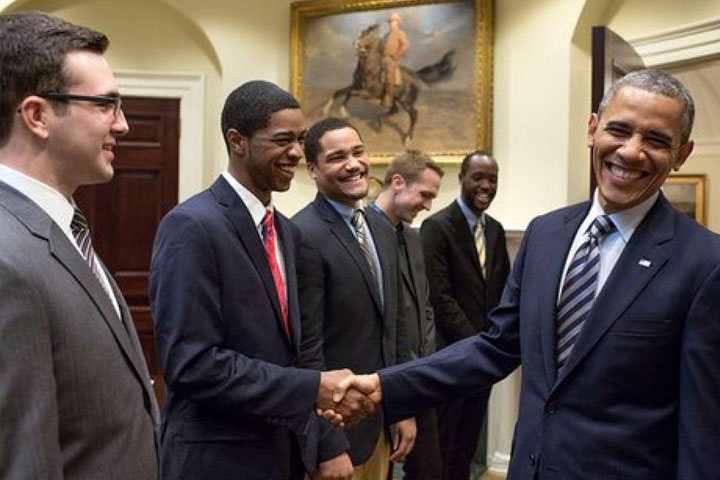 When he met President Obama in the Roosevelt Room, Fisher called it a “phenomenal experience.”

“He is very, very engaging.  He made a joke about our group, noting we were lined up shortest to tallest.  He said, ‘What is this, a basketball team?’ and started to laugh.  He makes you feel he is really listening; when he shakes your hand, he holds it for a very long time,” said Fisher, a junior majoring in political science: legal studies.

Though legislators could not agree on student loan rates which increased July 1, Fisher’s experience in student advocacy was invaluable.  He also met a personal hero, Congressman John Lewis, a U.S. Representative in Georgia since 1987 and a civil rights leader.

“He has a great ability to speak about his experience.  We talked about the role of a community leader at the micro-level,” Fisher said.

Fisher also learned he was selected as a Presidential Fellow for the Center for the Study of the Presidency and Congress, “a non-profit, non-partisan policy and education organization located in Washington, D.C.”

In Interim UTC Chancellor Grady Bogue’s letter of nomination, written with “the highest recommendation by our Political Science Department and Director of our University Honors program,” Bogue said Fisher is “a young man of extraordinary leadership promise.”

“His leadership in recruiting and academic affairs for the Honors Program has been very impressive.  He is organized, efficient, sincere and a powerfully effective speaker,” Bogue wrote.

During Fisher’s fellowship in academic year 2013-14, he wants to pursue a research project focused on the US President’s role in higher education policy.