Chancellor delivers State of the University

Hamilton County Mayor Jim Coppinger called UTC “a vital part of Hamilton County for more than 125 years” and he thanked Chancellor Steve Angle for his leadership. 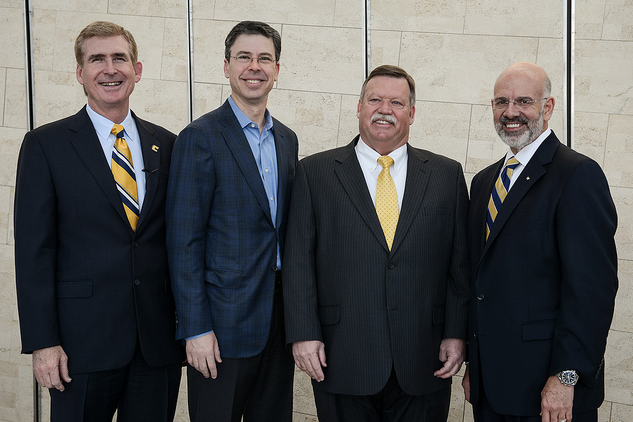 Coppinger explained that the University has had several names during its history, but its motto has not changed. “‘We Shall Achieve’ is a motto we also practice in Hamilton County through good government, conservative fiscal management, and creating economic development,” he said.

Coppinger made his remarks before the 2014 State of the University address by UTC Chancellor Steve Angle. In his inaugural year, Angle delivered his speech to two different audiences. He spoke to community leaders earlier in the day followed by a campus presentation to faculty, staff, and students. Click here to read Angle’s full address to the community. In addition to reporting on the strengths of the campus, Angle reiterated the campus priorities of student success and community connections.

University of Tennessee President Joe DiPietro opened the morning event. “I’m very, very proud of this campus and this University. I look at a system a lot like being a crown with a set of six jewels in it, and no doubt, this is one of the sapphires—this campus, this place, and what it does,” said DiPietro. “Steve and I set goals annually and then it’s up to him to work with his team on campus to move the place forward to try to achieve those goals. He’s done a great job.”

County Mayor Coppinger talked about the GEAR UP program, which places UTC students in Hamilton County schools to mentor and tutor younger students so that they can achieve academic success and college preparedness.

“Every year, thousands of our students enter the hallways of UTC to prepare for the good family-wage jobs that are being created through partnerships,” Coppinger said.

Coppinger congratulated Angle for establishing and building a good relationship with Hamilton County.

Chattanooga Mayor Andy Berke spoke of the positive ways the leaders from the University and city and county governments work together, saying these relationships “get things accomplished.”

“There’s nothing that makes our city better than seeing thousands of people come out of that University with a college degree, an idea, and some energy,” Berke said.  “And so as we think of what really inspires our city, The University of Tennessee at Chattanooga is a major part of that.”

Mayor Berke thanked Angle for understanding that “UTC’s success is the city’s success, and vice versa.”