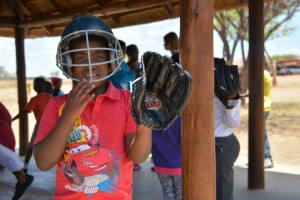 For UTC senior Caroline Breeden, baseball is more than a sport – it’s a chance to combine her Elementary Education degree and her passion for nonprofits to provide love to children in need through nonprofit group, Baseball Miracles.

Breeden never played softball, nor grew up as a big fan of the game. She first became acquainted with Tumminia in 2014 through an ex-boyfriend who met him at one of his games. Tumminia had been planning to take Baseball Miracles to Kenya, but because of political strife in the area, the group was unable to go. Breeden’s ex mentioned to Tumminia that she was currently in South Africa, volunteering at Bethesda Children’s village, an orphanage for children whose parents died of HIV and AIDs. Breeden got in touch with Tumminia, offering to coordinate a trip to South Africa, where Baseball Miracles could host a clinic at Bethesda.

Breeden has worked with Baseball Miracles since then, coordinating trips and seeking partners.

“It’s easier for me to be the middle man. I just kind of fell into that role after planning the South Africa trip. John calls me the ‘internal advisor’, but I don’t need a title. The team is so busy, they all work in baseball and it’s baseball season right now, so I make sure they’re prepared. I help set up the logistics of the trips before we go. I find out where we’re going to stay, the inoculations we need before we can leave, what the place we’re going is like,” Breeden explained.

Baseball Miracles has held clinics abroad as well as in the United States. At the clinics, each child receives a ball and a glove, so they can continue to play after the Baseball Miracles group leaves. The children are also presented with personalized baseball cards featuring their photographs, taken by the group’s photographer.

“The personalized card is the first time many of the children have seen pictures of themselves. They really treasure their cards,” Breeden said.

Other items that the children receive depend on what donations the group has received. 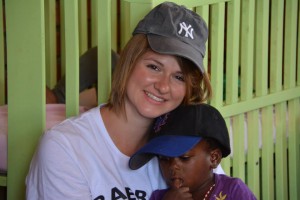 “We’ll literally take anything from prayers, to gloves, to balls, to shirts, hats, money, volunteer hours. Everything is so appreciated,” Breeden says. “Your old glove collecting dust in the garage is brand new to them, and it’s the happiest gift they will get all year.”

During the South African clinic, in addition to a ball and glove, all the children received hats, t-shirts, and Big League Chew, which was donated by the gum’s creator, Portland Mavericks’ pitcher Rob Nelson. The team left extra equipment, including bats, t-ball stands, and bases, with the orphanage managers. The team has also been able to take peanuts, donated by Logan’s Roadhouse in Chattanooga.

“The kids always get a ball and glove, so they can keep playing once we leave, but we will take any kind of additional donations related to baseball. It depends on what we get, what we can transport, and how many kids are at a given clinic. They LOVED the chewing gum, though,” Breeden said.

Breeden has a particular desire to raise awareness of Baseball Miracles in Chattanooga.

“Chattanooga is a great town, with a strong, close knit community, and UTC is already so involved with community service. I feel like people here would latch on to the idea of helping others through the game of baseball,” Breeden says. “Baseball is already established in Chattanooga, because we have the Lookouts here, and there are also a lot of little leagues in the Chattanooga area.”

There are already plans to place a box in the Lookouts club house so that the players can drop off used equipment they don’t want. Breeden also hopes to have an equipment drive outside a Lookouts game, so people coming to the game could donate equipment and memorabilia. 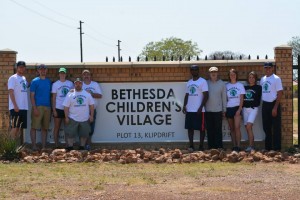 The Baseball Miracles team has hosted clinics in Ireland, Indian reservations, the Dominican, and Africa. This year, the group went to Kenya in October, during UTC’s fall break, and will go to Honduras in November.

“We’re helping kids worldwide, but our kids here are also important, and we hope that we can inspire them to donate a used glove to help another less fortunate child. It all starts with love,” Breeden said.

Baseball Miracles accepts all donations related to baseball, including adult sized equipment and memorabilia. Anyone interested in donating should visit the Baseball Miracles website or email Breeden.

Breeden has since returned to Bethesda Children’s Village, where her partnership with Baseball Miracles began.

“They are still playing baseball, almost a year later. It’s not a one and done thing, we hope that there is a lasting impact. We see a need, and we are using baseball to fill it. These are children that need love, and we are able to give that love to them through the game,” Breeden said.