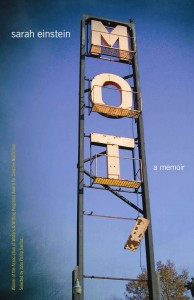 An unlikely friendship with a homeless veteran, and the adventures that ensued are the inspiration for Creative Writing Professor, Dr. Sarah Einstein’s award-winning book Mot: A Memoir, published last year.

“The committee selected overwhelmingly, ranking it above 7 others. We think that students will enjoy the story, be challenged by the topics, find many points of entry into research, and learn from the prose style,” FMU said in a statement to Einstein.

Einstein was featured on WUTC’s Around and About Chattanooga last fall. In the interview, she explains the relationship she had with Mot, a homeless veteran wrestling with delusions who became a source of friendship and wisdom during an uneasy time in Einstein’s life. She offers a taste of the memoir with an excerpt from her book; with her help, Mot has agreed to move into an apartment in the scene that follows:

“He hasn’t shown much enthusiasm for the idea of living indoors. He’s made it clear that he is really taking the apartment for my sake, so I won’t worry so much. And he’s right about that, his being indoors eases my worries. Winter is coming and 66 seems too old to be planning to weather the out of doors.”

Check out the full interview on WUTC’s website here.

Now, Einstein is working on a collection of essays that explore how Austria recreated its national identity after World War II. With the help of a generous grant through the College of Arts and Sciences, she will spend this winter in Austria conducting interviews and archival research for the project.

Her personal position as a Jewish daughter-in-law in an Austrian family will offer a unique perspective to her work.

“Both of my husband’s grandfathers fought on the side of Germany, and one was a member of the Nazi party. By telling their stories, and the stories of how Austria both memorializes and attempts to move beyond its role in the Holocaust, the book will focus on what comes after the atrocities have ended and a family, as well as a country, must find a way to recreate a life for itself.” explains Einstein.