Chem-E-Car Team heads to AlChe Nationals in the fall 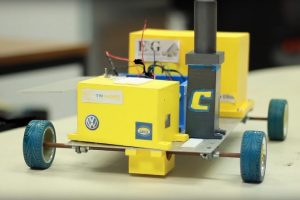 Chem-E-Leon took on the Goliaths and came out as David.

The little car that could — designed and built by the UTC Chem-E-Car Team — came in second place in the regional American Institute of Chemical Engineers (AIChE) Chem-E-Car Competition, beating schools such as Georgia Tech, the University of Tennessee at Knoxville, the University of South Alabama and Auburn University.

With that win under its belt, in November the UTC team will be moving on to the national AlChE Chem-E-Car Competition in Minnesota.

“That’s pretty awesome, considering we’re a smaller school and we don’t have the kind of resources to devote to this that other larger schools do. For instance, Georgia Tech funded two cars, and we only funded one, but ours beat both of theirs,” said Dr. Bradley Harris, Assistant Professor of Chemical Engineering.

Each year, a student team from the College of Engineering and Computer Science designs and fabricates a car that can be powered and stopped by chemical reactions. And it must be so small that, when disassembled, it will fit into a shoebox.

Chem-E-Leon got its name from a special chemical reaction, said Harris. “It’s called the ‘chameleon reaction,’” he explained.

“The car’s power reaction is a chemical battery using magnesium and copper with an acid solution. They have this very neat reaction that they use to stop the car that changes colors across this whole spectrum, and when it hits a certain color they want, that’s when the circuit stops.”

This year’s success matches the UTC team’s highest placement at regionals to date, having placed second once before in 2015. This will also be fourth time in seven years the team has qualified for nationals.

Armed with their various vehicles, college teams face off in regional competitions in spring. The top five teams go on to nationals in the fall.

Time is tight in the competition. An hour before it starts, the distance and the weight the cars must carry is decided at random. The teams then determine the detailed chemical processes required to move their car the exact distance carrying the assigned load. Each team has two runs, and the team that comes closest to the goals wins.

“So you have to have taken data for your car at different distances and different water weights and have everything calibrated,” Harris said.

The UTC team was responsible for all aspects of the competition, including planning, engineering, budgeting, construction, and learning to work together toward a common goal. 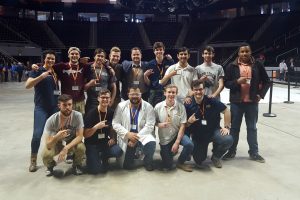 “I’m really proud of them, particularly the seniors,” Harris said. “We had really talented, dedicated students who are always working hard in the lab.

“The students are very independent. They handle everything themselves. They work on the car, fill out all the paperwork to get it registered, meet the deadlines. I don’t advise much on the specifics of the car, I just make sure they have the resources they need and the team is doing well.”

While other colleges have teams made up of nothing but chemical engineers, Harris attributes part of the UTC team’s success to its interdisciplinary members, which include chemical, mechanical, and electrical engineering students.

“So where other schools may mess up is, say, they may not have the car aligned, so when the car accelerates, it veers off, and if you go too far out of bounds, you’re disqualified,” Harris explained.

An electrical engineer, “knows how to program a circuit. That’s very helpful to get the car to stop exactly where you want it to.”

With seniors graduating, the team will be down a few members when it returns to competitions in the fall, but they’re up for the challenge of carrying on without them.

“You need members of the team who are juniors and sophomores who can keep carrying the torch. That helps us too. Some teams only have the minimum number of members, and if they’re seniors and they leave, then the next year’s team has no continuity,” explained Harris.

Not only will team members continue perfecting their car for the national competition, they will simultaneously begin work on the next year’s car. Once a team qualifies for nationals, it cannot run the same car again the following year in regionals; some aspect of the design must change.

“They’ll sort of be on a dual track. They will have to make sure this car is ready for nationals, and also begin work on a new power or stopping reaction for the car for the following spring’s regional competition,” said Harris.

This year’s team is learning from last year’s mistakes. Like many other schools, the car used hydrogen fuel cells for power. But after placing second in 2015, the team came up with its own chemical battery for the first time in 2016.

But the battery was left it in its chemical solution during shipping so, when the team tried to run it at regionals, corrosion kept it from moving.

“They learned that lesson,” Harris said.

“They have been perfecting this car for a year now. This time, they definitely shipped the solutions separated and didn’t put the metal parts, the anode and the cathode, in contact with the solution until the car was ready to run.