UTC celebrates commencement on December 15 and 16

The graduating class of 2017 will cross the stage during commencement ceremonies on December 15 and 16.

The ceremony for graduate students begins at 2 p.m. on Friday, December 15, at McKenzie Arena. UTC alumnus and former U.S. Secret Service agent J. Michael Pearson is the speaker for this event.

To watch a live stream of the graduate ceremony, click here.

Undergraduate students of all colleges will participate in commencement ceremonies at 9 a.m. on Saturday, December 16, at McKenzie Arena. UTC Chancellor Emeritus Dr. Bill Stacy will be speaking.

To watch a live stream of the undergraduate ceremony, click here. 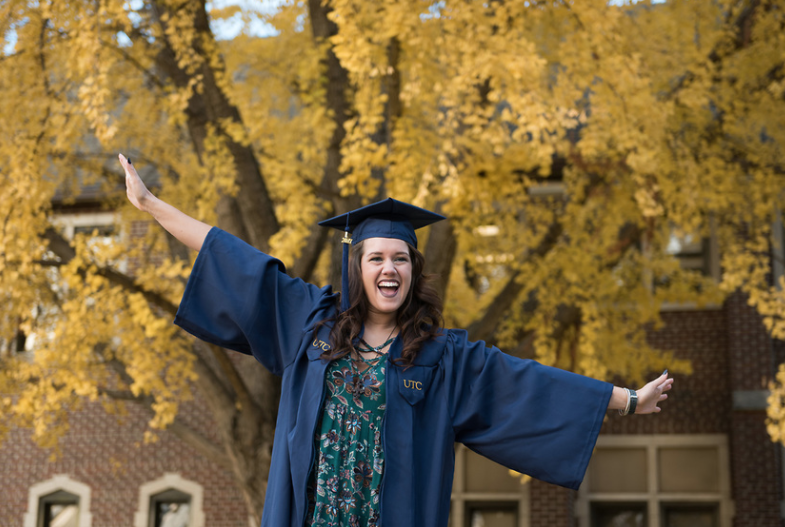 Where do I get my cap and gown?

Caps and gowns can be purchased through the UTC Bookstore online ordering process. The bookstore is located in the University Center and you can call 423-425-4107 if you have questions. You’ll select your shipment preference to start. In addition to your height, weight, and hat size, you will also need to know the academic degree you are to receive.

Where do I park?

Parking on Commencement Day will be a challenge, therefore, be sure to allow plenty of time for traveling on campus and finding available parking.

When should I arrive?

We ask that all graduates arrive at the McKenzie Arena 45 minutes prior to start time.

Where do I line up for the processional?

You will line up in the designated area located on the first floor of the Arena. Please click here to determine where you report to line up.

Where will graduates sit on Commencement Day?

Please click here to determine where your graduate will sit on commencement day. The arena map will help you decide where to sit and best see your graduate walk across the stage.

When will I get my diploma?

Diplomas will be delivered to the Records Office approximately 8 weeks after graduation. Graduates will be sent an email to their UTC account when they have arrived and students will have 2 weeks to come by the Records Office to pick up their diploma. Students must bring a photo ID with them and have no holds on their account (see After Graduation for more information on holds).

After 2 weeks all remaining diplomas will be mailed out to the address listed on their graduation application. If this address changes after the application is submitted, please notify the Records Office at utcgraduation@utc.edu. The UTC diploma measures 14″ x 17″.

And he didn’t stop there.

Six years later, after rising to the rank of sergeant in the Chattanooga Police Department, he transferred to the U.S. Secret Service, where he spent the next 21 years protecting every President and Vice President as well as foreign heads of state visiting the United States.

Along with Presidents Ronald Reagan, he was on protection teams for such dignitaries as Pope John Paul II, Queen Elizabeth of England, King Juan Carlos and Queen Sofia of Spain, and Russian General Secretary Mikhail Gorbachev, among many others.

For his work as a Secret Service agent, he was given the organization’s Dedication & Service Award.

A native of Hixson, he now is president of Pearson Security Consulting Company and, in 2010, he received the UTC Distinguished Alumni Award.

He is married to Liz and they are the parents of Natalie, Jerry Michael, Jr., and Danielle, who have given them three grandchildren and one great-grandchild.

Dr. Bill Stacy served as Chancellor of the University of Tennessee at Chattanooga from 1997 to 2004, a period when the campus experienced significant growth from both physical and educational standpoints.

With funding secured during his tenure, the Engineering, Math and Computer Science building was completed and the University Center underwent a major renovation.  The Guerry, Decosimo, Stophel and Walker residence halls were built on the South Campus and the SIM Center was opened.

Dr. Stacy also led the development of the University’s first doctoral programs.  The Ph.D. in Computational Engineering was begun, followed by doctorates in Education and Physical Therapy.

In 2001, using a $25 million donation from Jack and Alice Lupton, dubbed the Lupton Renaissance Fund and the largest private gift in the history of the university, Dr. Stacy spearheaded a new technology thrust. State-of-the-art devices were spread across campus, including a series of multimedia suites that cost $20,000 each. By 2004, as a result of Dr. Stacy’s forward thinking, there were more than 5,800 computers at UTC, up from less than 2,000 in 1997.

Even after retiring, Dr. Stacy continued to serve the university as a trustee on the UC Foundation for the next 12 years.