Celebration of African-American Artists, The Legacy Show comes to UTC

A celebration of African-American artists through music, poetry and visual images is coming to UTC.

What: The Legacy Show

Where: Roland Hayes Concert Hall in the Fine Arts Center

Admission: Free and open to the public.

“I have wanted for a number of years to present programs that feature African-American classically-trained musicians and composers, because there are incredibly talented minority musicians that most Americans don’t know anything about,” explains Jonathan McNair, the Ruth S. Holmberg professor of American Music who is sponsoring the event.

Each musical piece is paired with poetry from the likes of James Weldon Johnson, Langston Hughes and Maya Angelou, to name a few. Composers and arrangers include Duke Ellington and Francis “Frank” Johnson—who was the most-popular dance band leader and cornetist in Philadelphia in the early- to mid-1800s. The Legacy Show also features living composers who draw on various popular music genres. 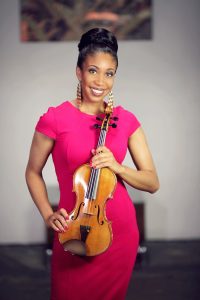 By bringing The Legacy Show to campus, McNair says he hopes it sparks conversations about “how African-Americans really experience life in our country” and encourages “greater sociocultural awareness of the American experience for minority persons.”

Hughes’ solo album Legacy: Violin Music of African-American Composers, was named one of the Top 10 albums of 2011 by “All Music Guide” and has been broadcast via radio around the world. Her musical influences include artists such as Ella Fitzgerald, Mahalia Jackson and Lena Horne, as well as major figures in classical music. She has performed at Carnegie Hall and the Kennedy Center and has credits in popular music, film and television.

For The Legacy Show, Hughes is joined by pianist Byron Burford-Phearse, who has performed across the United States and internationally, including shows in Paris as part of the European American Musical Alliance.

For more information about Tami Lee Hughes and the show’s program, visit her website.