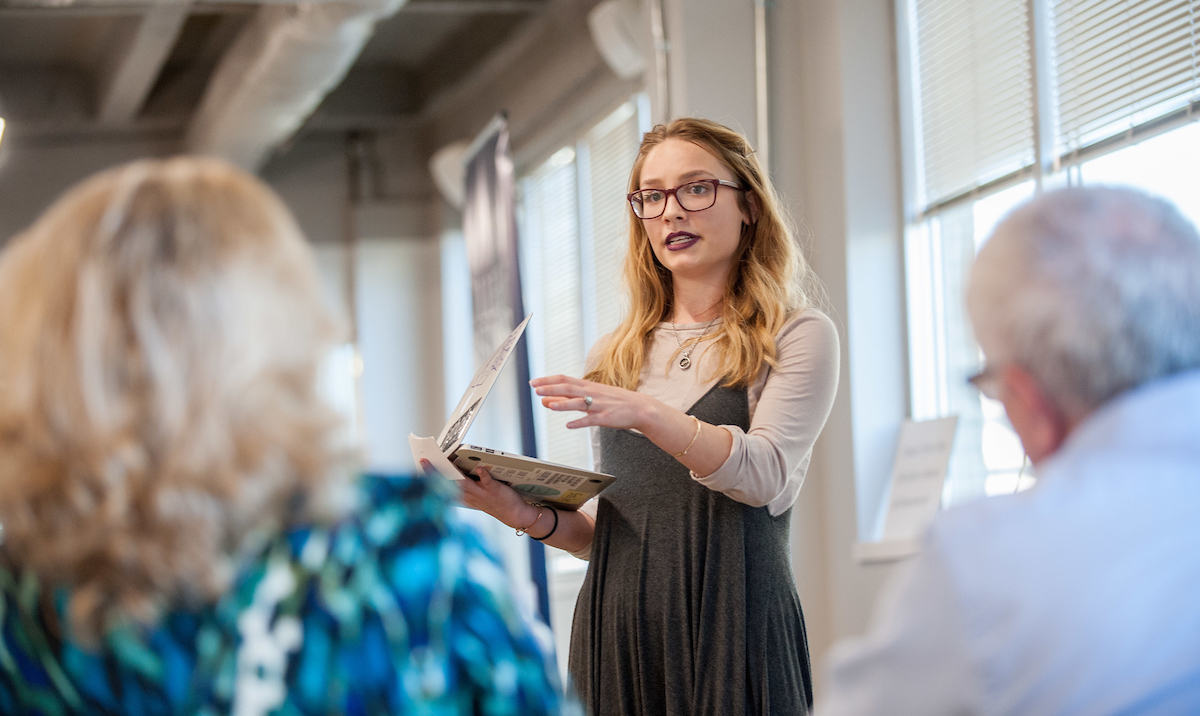 For six years, UTC’s College of Business has asked its students to pretend.

In the college’s annual Elevator Pitch Competition, students must picture themselves standing in an elevator with a potential investor. Taking advantage of a captive audience, they must pitch their idea in the time it takes to ride the elevator to a different floor.

In the real world, an entrepreneur must be able to summarize their product in a concise and compelling manner. Do it clearly and quickly enough and you may find someone willing to risk money on your idea.

“I am interested in the innovative side of engineering. Most often, people within my field come up with incredible ideas and that potential goes unnoticed because many do not know how to communicate their idea succinctly,” Yanagida says.

Yanagida developed a process to produce his sensor at the National Science Foundation Research Experience for Undergraduates program at Tennessee Technological University. His original goal was to produce a sensor that could replace the brittle glass sensors currently used for fiber-optics networks. But he quickly discovered that what he had developed had a far greater range of potential, from producing other types of sensors to ones that use the Earth’s magnetic field to determine the altitude of planes.

He pushed himself to participate in the competition so his ideas and product don’t get left behind.

Over the years, the Elevator Pitch Competition has evolved into two different tracts—traditional ventures and social ventures—and quite a few lucrative opportunities for winners. Cash prizes, free registration for Co.Starters or Co.Starters for Causes workshops and free mentoring with local businesses such as Miller & Martin Law Firm, are some of the perks up for grabs this year.

Austin Robinson, a business finance: investments major, and Omar Alghoul, a business management major, came up with the idea for their product while tailgating at a football game in Gainesville, Fla.

“We wanted to tailgate for the game but didn’t know anyone in the area. So we started walking up to random tailgates who were rooting for the same team as we were,” Robinson says.

But the cold-call approach to joining other tailgaters had them feeling a little uncomfortable. Some fellow fans weren’t as welcoming as the duo had expected.

“Then we started to think, ‘Why isn’t there an app that allows you to find tailgates of like-minded fans who just wanted to have a good time with other fans rooting for the same team?’” Robinson explains.

One beta version of the app and $50,000 in investments later, Robinson and Alghoul are ready to pitch TellGate, an application they describe as a combination of Yelp and a social media platform.

“Winning the pitch competition is great, but just because you don’t does not mean in any way, shape or form that your venture is not going to be successful,” says Dr. Beverly Brockman, department head of marketing and entrepreneurship.

The process of preparation and participation in the competition is a prime learning experience for students, Brockman says. They learn how to look at their ideas critically and, more importantly, how to shape their ideas.

Some of the most compelling pitches were from repeat competitors, she says. Students who didn’t win a previous competition took a year to rethink and evolve their idea, then came back stronger the next year.

“Entrepreneurship, it’s really an ongoing, continuous process of developing your business model,” she says. “We want our students to come back and pitch their venture ideas again. They’re not going to be the same when they pitch their ideas again anyway.”