When UTC first opened its doors in 1886, a journalist described the university as “a light upon a hill,” a nod to both the gaslights that illuminated the campus at night and to the vision of community leaders to create “Chattanooga’s University,”

More than 130 years later after opening as the originally-named Chattanooga University, UTC continues to shine with scholars and researchers who gathered for the third annual ReSEARCH Dialogues, the campus’s largest academic research conference.

For two days in the spring, ideas are exchanged and connections are made between the community and more than 600 presenters, including undergraduate and graduate students, faculty and staff.

The university’s research community is varied with more than 50 campus departments and offices represented at this year’s event. While their disciplines are unique, their goals are the same—to explore, to study, to discover.

Here are a few of the projects presented at this year’s ReSEARCH Dialogues. To learn more, visit the event’s website. 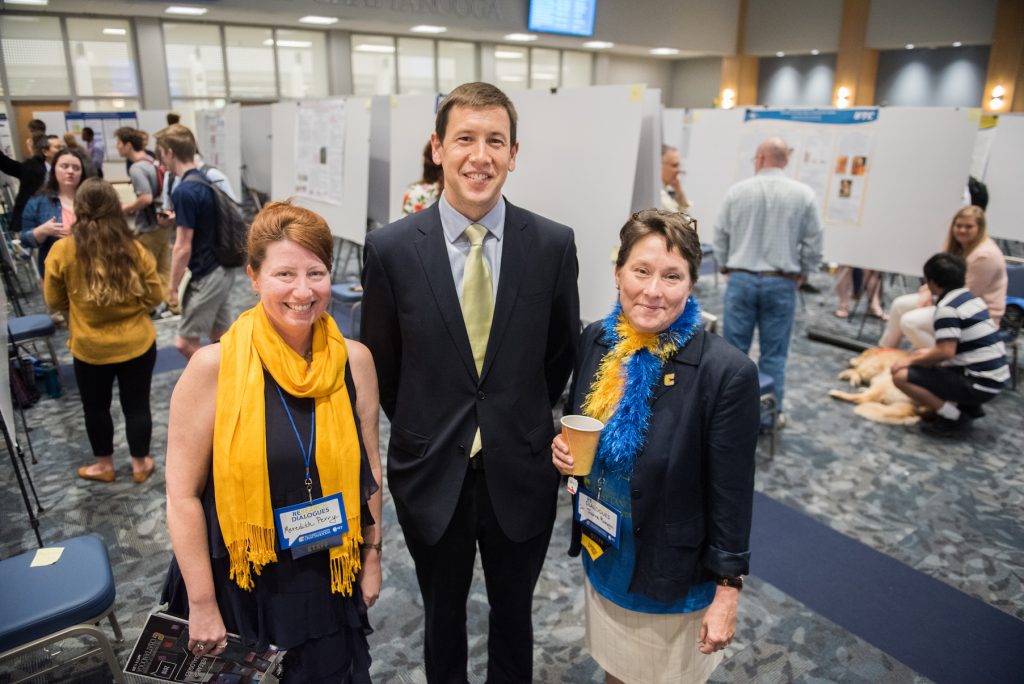 The average American spends more than two hours a day on social media with more than 30 minutes on Facebook, the world’s most popular social platform. Could all that posting, tweeting, liking and scrolling have an effect on our real-world lives? To find out, UTC undergraduate student Alex Shea teamed up with Dr. Amanda Clark, an assistant psychology professor.

The group’s research was inspired by a previous study that examined how young people perceive their own relationships after viewing a Facebook profile that portrays an idealized romantic relationship. It’s a familiar sight on Facebook: The couple look so in love without a care in the world—or any fight ending in slamming doors.

Instead of romantic relationships, Shea focused on social media’s effect on how women aged 50 to 80 perceive their lives and family relationships.

“A lot of social media research focuses on younger generations. I thought it was a really cool idea to focus on the older adult population. It’s a population that’s really overlooked in this type of research,” she says. “In general, we wanted to see if the way that older women perceive their own families and was different after viewing an idealized portrayal of a family.”

The group is still collecting data and analyzing their findings, but Shea has already learned a lot about the research process.

“I’m only a sophomore. I was just starting to get into my major-specific classes, so I very much felt unqualified whenever I first started,” she says. “I thought to myself, ‘Why would somebody choose me to take on such a big project at my age and lack of experience?’ But that’s why I started, so that I can start applying the knowledge I’m learning in class.

“Research is a lengthy process, but it’s worth it. The findings can do a lot for the field of psychology and help us better understand ourselves and those around us.” 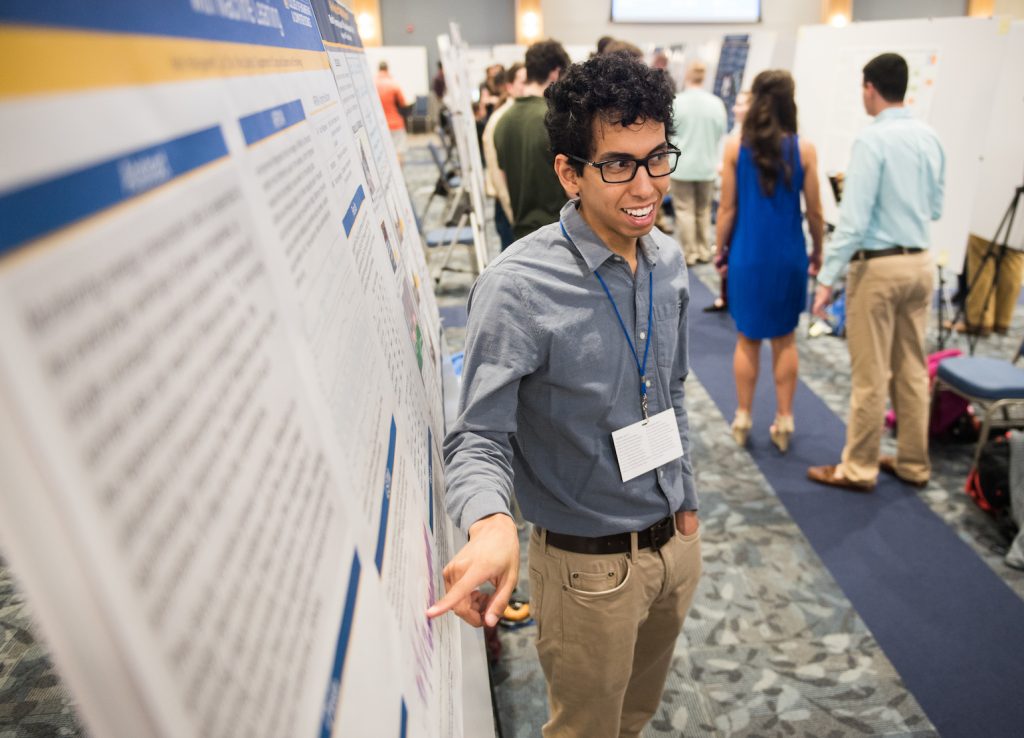 When Dr. Marcus Mauldin, associate professor of public administration, stopped at a gas station in rural Alabama, he was surprised to see cigarettes being sold from a vending machine. He returned to Chattanooga and had discussions with his UTC colleagues about accessibility and the relationship between public health and policy.

After several conversations, the group, including Mauldin, Dr. Shewanee Howard-Baptiste and Dr. Kara Hamilton—both exercise science professors in the UTC Department of Health and Human Performance—and Nicole Brown, an academic advisor and adjunct faculty member in the Department of Communication, decided to investigate the situation in Chattanooga. The group specifically looked at food deserts.

The U.S. Department of Agriculture defines a food desert as an area with limited access to fresh fruit, vegetables and other healthful whole foods. A person is in a food desert if they live more than one mile from a supermarket. More than 70,000 people in Chattanooga live in food deserts, statistics show.

“Living in a food desert impacts the choices residents make about what they eat, how much they eat, when they eat, where they eat and who they eat with. I think it impacts on every level,” Howard-Baptiste explains. “It influences the types of foods they’re eating and where they’re getting their food. Some people are getting their meals from gas stations, bodegas or a dollar store because those are some of the spaces that are in their communities.”

Enlisting the help of graduate students Erika Stuart and Kori Hahn, the group approached Chattanooga Girls Leadership Academy (CGLA), a public school located in the Highland Park neighborhood only a few blocks from UTC’s campus. CGLA student Janel Jones helped the UTC faculty begin their research. She networked among her classmates to recruit participants and trained them to use a community-based research method called “photovoice.”

Photovoice relies on the study’s participants to use their own photography and stories to illustrate their reality. In Photovoice, participants take photographs of their life’s experiences. We gave them cameras to take pictures to capture what a food desert is and how it influences their everyday lives,” Hamilton says.

“This is our way of understanding the concept. We can read statistics all day long, but what does it mean for people who actually live in those spaces? What are the experiences of the people who live in identify food deserts in the Chattanooga area?” Hamilton continues. “This type of research actually goes in at a personal level.”

The photographs from the preliminary research were indeed personal, giving the group an intimate look into the participants’ eating habits and everyday lives. There was a black-and-white snapshot of the inside of a refrigerator, a photo of a sign of a fast-food restaurant taken from an empty parking lot and a picture of hands holding a hamburger at a school lunch table.

Now that the group has collected preliminary data, they hope to continue the conversation, bringing in more study participants and connecting with local community leaders and policymakers.

“We see our research as partnering with the community. Their pictures created a dialogue with us. And from that dialogue, we can tell their stories and help make changes,” Hamilton says. “It’s all about partnering and empowering the community.” 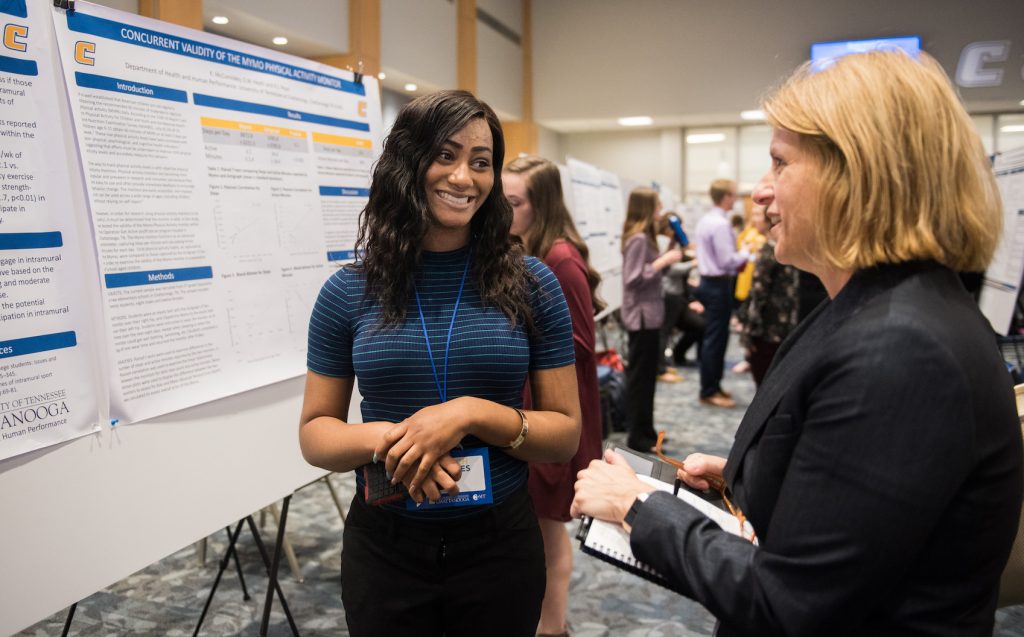 Research has shown that owning a pet can decrease stress, lower blood pressure and improve mood, but do humans also have an effect on animals? With the help of more than 80 cats in a local animal shelter, Mary Howard, a psychology graduate student, got a little closer to answering that question.

“There’s really not that much on the cognition of cats, specifically,” she says. “There’s much more research on dogs. They’re not quite as willing participants like dogs. They can’t be coerced as easily to do what you want. So there’s a pretty big gap in the literature on cats, especially on their problem-solving skills.”

In her research, she examined how interaction with humans can affect a domestic cat’s problem-solving skills. She partnered with McKamey Animal Shelter to do her research. Each cat was given a handmade toy constructed from a plastic container and other household materials; a treat was inside. If a cat could figure out how to solve the puzzle, he or she would get the treat. Over the course of several months, Howard observed more than 80 cats scratch, bite, pry and, yes, sometimes completely ignore the toy.

“The good thing with shelter cats is they can be pretty cooped up all day, so they’re pretty willing to explore,” Howard says. “When I put the toy next to them, most would sniff it and at least try for the first couple of minutes. Then only some would solve it and the rest would just go lay in the corner after they realized they couldn’t get it.”

Howard found that cats who displayed higher levels of socialization toward humans were more likely to solve the puzzle and receive a treat. These cats display behaviors such as making eye contact, purring and having a playful, relaxed demeanor around humans. Cats who are less socialized are more likely to show aggression by biting or hissing or cowering in fear when confronted by a human.

“I think socialization helps them be bolder. They’re not afraid of novel things. Shelter cats especially can a lot of different people interacting with them throughout the day, so it makes them less fearful,” Howard explains. 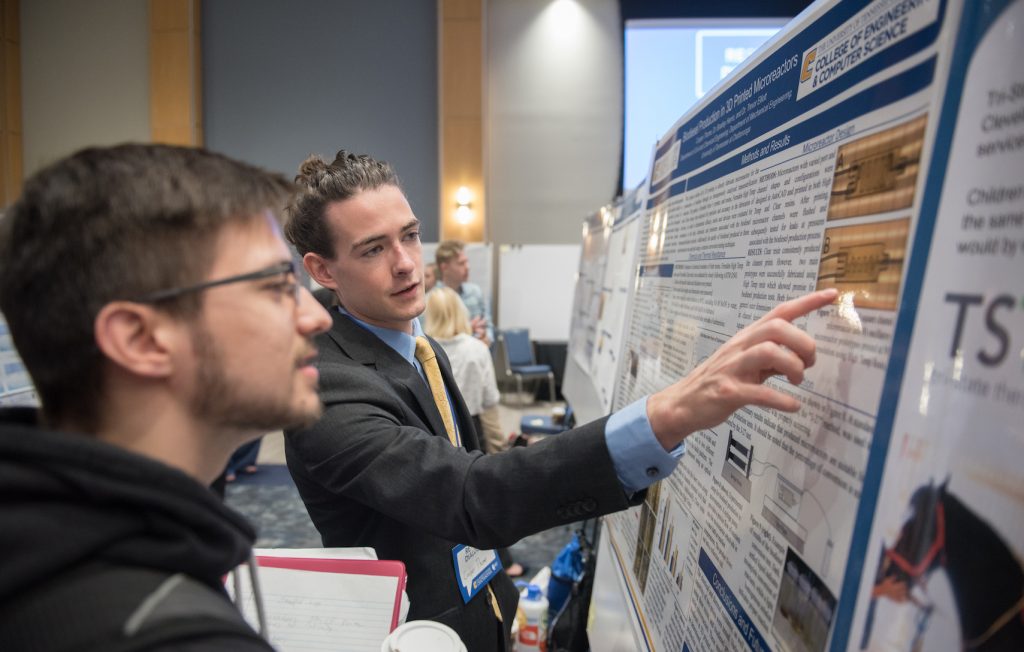 Many Chattanoogans drive past a nondescript building near the Chickamauga Dam every day, completely unaware of the technology housed inside. But the TVA-owned building is leading the way in energy sustainability, thanks in part to Dr. Chuck Margraves, UC Foundation professor of mechanical engineering.

Margraves is helping to refurbish the space into a zero-plus energy building, which combines energy efficiency and renewable energy generation to consume only as much energy as can be produced onsite through renewable resources.

According to Margraves, builders need to do three things to create a zero-plus energy building. “You have to generate power, so that’s typically through solar or wind. You have to reduce the usage. We use a geothermal heat pump, which is a really high-efficiency HVAC system. And you have to decrease the load, which is usually means installing better insulation, windows and doors.”

Growing up in a family of teachers, Margraves is a big advocate of education. In addition to his work at the TVA building, he enlists UTC students to create realistic, small-scale models of zero-plus energy buildings. Around the size of a dollhouse, Margraves takes these models to local middle and high schools, teaching students about energy and sustainability concepts.

Tagged with: Office of Research and Sponsored Programs Research Dialogues