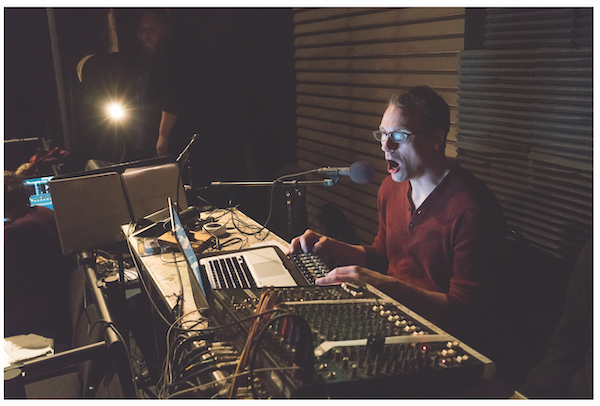 Ben Williams kicked off his career as an actor, director, sound and video designer in New York City with the Wooster Group, an experimental theater company known for their original works in theater, media and dance. Photo courtesy of The New York Times

This theatre alumnus made a beeline to New York City after graduation. His onstage experiments have gained attention, attracted awards and landed him on the cover and in the pages of American Theatre Magazine.

Ben Williams ’03 was studying abroad at Masaryk University in Brno, Czech Republic, when he fell in love. It was during that year overseas when he saw Kral Oidipus, by a company called HaDivadlo, for the first time, then four more times. Although it was staged in a small theater, the show felt expansive and dreamlike, like “something between a fairytale and a sci-fi film … it blew my mind,” Williams says.

After that, there was no turning back. He was chasing after the possibilities afforded by experimental theater. Any attempt to stage a show without a script and with the artistic freedom rarely given to Broadway productions is how Williams describes experimental theater—the genre in which he has seen so much success, with accolades to prove it. Most impressive is the recognition he received with an Obie Award, Off-Broadway’s equivalent of a Tony, for his sound design work with Matt Tierney on The Select, based on The Sun  Also Rises.

Described by The New York Times as a “motley assortment of sounds,” the audio design for this production inspired by Ernest Hemingway’s novel was managed by performers onstage instead of by a crew in a box at the back of the theater. Williams and Tierney controlled the sounds for fight scenes, dropped bottles, music and more from behind a bar or desk onstage, all without breaking character.

Williams pulled double-duty again in This is the Color Described by the Time, where he created the sound design and performed it live from the stage while playing character Thornton Wilder. During the show, the audience wore headphones to really get inside the main character’s head, says Williams.

“It’s a more experiential kind of production, one that makes simple acts like reading, writing, cooking, eating and even thinking a very visceral encounter,” he adds.

When he’s mastering sounds for a production while also performing onstage or touring extensively across five continents, Williams embodies how the potential for what can be done on stage is limitless and tosses traditional expectations out the window.

“As a working artist, I don’t have a day job. I see my profession as a form of protest, which doesn’t mean that my work has to be overtly political.”

Sometimes, Williams says, he’s in your face, but other times his commentary sneaks up on you. He recently worked with UTC alumnus Brian Cagle ’97 to create Mind on Heaven. A hybrid show, Williams says, it’s “part documentary, part conjuring, part performance” and inspired by his and Cagle’s late friend Dennis Palmer, a self-taught Chattanooga artist and musician. Presented in both New York City and Chattanooga, the impetus behind the show was to find “simple, disarming ways to talk about racism,” Williams explains.

“A recurring theme in the show is how Southern artists represent Native Americans, African-Americans and the Civil War.”

Alongside Palmer, Williams and Cagle pulled from old videos and created original animations. They broke plates and performed a dance originally created by a 1930s vaudeville actor to explore Southern racism, inclusion and the “messy, nuanced area between.”