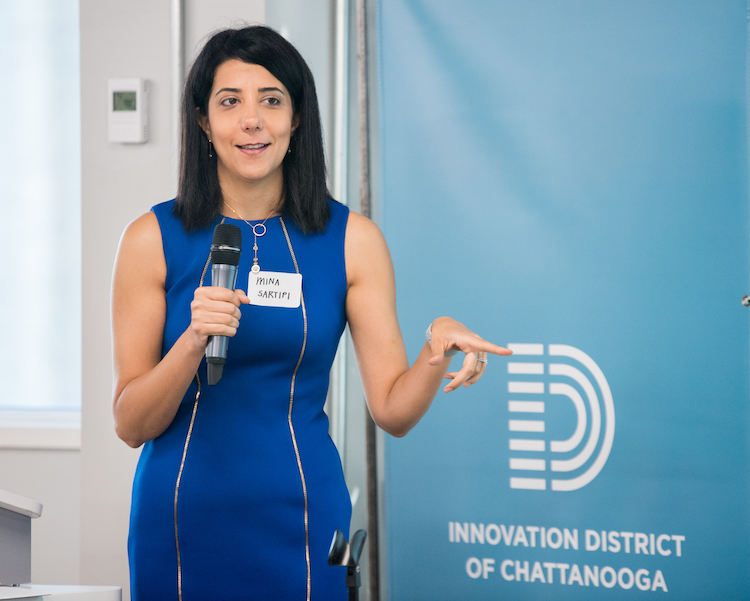 UTC’s Mina Sartipi is a key member of the Chattanooga’s Smart Community Collaborative which is researching, among other things, improved traffic flow and safety, greater energy efficiency and cleaner air in the city.

University of Tennessee at Chattanooga Professor Mina Sartipi has been named among the most influential business leaders in Chattanooga for 2019 by Edge magazine. Read more below about her work in and out of the classroom.

A lot of people and partners are betting on Mina Sartipi and the Center for Urban Informatics and Progress.

As much as the University of Tennessee at Chattanooga urban science professor wants to reward their confidence, Sartipi wants even more for the center she runs, also known as CUIP, to produce results that create opportunities that keep her talented students in Chattanooga.

“We have gotten a lot of support, support that perhaps I never thought we would have gotten, so every minute of my working life is about making CUIP as successful as it can be. More than just on a daily or even an hourly basis, on a minute-by-minute basis, I am thinking ‘What did we learn from this? What can we do better?’

“I really want CUIP to be successful. We have put a lot of effort into this, and many people have put a lot of faith in this,” said Sartipi, who was named as one of most influential business leaders in Chattanooga for 2019 by Edge magazine.

One of those people is Chattanooga Mayor Andy Berke, whom in a 2018 story in PC Magazine, cited Sartipi’s work as a factor in the city’s emergence as a tech hub.

“She’s doing a lot of work around connectivity and sensors as it relates to health and transportation. One of her main focuses has been an experiment on vehicles communicating with each other,” Berke said in the story. He also noted the multiple National Science Foundation funding awards for research proposed by Sartipi that could benefit the city.

The work is part of Chattanooga’s Smart Community Collaborative involving UTC, EPB, Erlanger Hospital, city and Hamilton County governments, the Enterprise Center and Co.Lab, the city’s start-up accelerator and supported by CUIP. In January, the collaborative initiated its “urban testbed” environment—a series of cameras and sensors on M.L. King Boulevard between Central Avenue and Market Street that collect non-personally identifiable data on vehicle, bicycle and pedestrian traffic and air quality.

Among the potential outcomes of the research is improved traffic flow and safety, greater energy efficiency and cleaner air.

“We have the capability because of the collaborative that we have with the city and public and the other seven entities and, ultimately, it will make the city of Chattanooga a testbed,” Sartipi said. “That’s our goal: to expand what we are learning here on one street to our entire city, to make all of it a testbed. Then, what we learn from this can be adopted by other cities.

“We listen to other cities, and we want them to learn from us. No two cities have the same challenges, but it’s possible to find solutions that are useful to multiple cities and in very different environments.”

In the same month that the urban testbed was launched, the Sartipi-led CUIP was cited for its role in earning Chattanooga honors as one of the top 50 “Smart City” ventures in 2019. The recognition came from US Ignite, a National Science Foundation project to spur smart city research. In April, US Ignite also named the Chattanooga project among just three honored for demonstrating foundational and inspiring groundwork for the future.

Asked how such a successful and impactful Smart Cities program was established, Sartipi said, “Organically.”

“It was not like, ‘Let’s do this. Let’s bring in people and start a Smart City project.’ It really started with the research I was doing with my group—the Smart Communication and Analysis Lab, or SCAL—which was in mobility and energy at the time,” she said. “Then we received a couple of NSF funding awards. One was for energy, one for autonomous vehicles, and then (UTC professors) Dalei Wu and Yu Liang won NSF funding to research underground pipelines, and from that we began to see that we really needed to work with the city.

“Throughout this process, a lot of parallel things also happened—like just the right timing for everything. Reinhold Mann, (UTC) deputy vice chancellor for research, had a vision for a new research initiative. At the same time, Chancellor (Steve) Angle wanted very much for the University to be more involved with the community; then the mayor’s office led formation of the Enterprise Center as a gateway to the community. All of these fell into place and started growing, and the whole thing became smart city research and it just kept growing.”

The growth is getting noticed. In September, the MetroLab Network, which promotes city-university collaborations that produce public-sector tech transfer across the country, cited Chattanooga’s Smart City corridor on M.L. King Boulevard as an innovation to watch. In 2018, the Enterprise Center, a former TVA building-turned-anchor of the 140-acre downtown Innovation District, was declared 90 percent full two years after it opened.

Sartipi sees a potential twofold outcome that’s transformational both for the city and UTC students. For her, it all comes back to what she’s able to help her students achieve.

“I really do love my students,” she said. “That’s where the whole thing started for me, making sure these talented students graduating from UTC have opportunities that can keep them here in Chattanooga, and I see that two ways. If we produce good talent, that attracts good companies, right? At the same time, when there are opportunities for exceptional students, more exceptional students want to come here because they get to work with them.

“In addition to their classroom curriculum at the undergrad, master’s and Ph.D. level, our students also get exposure to really cutting-edge research that is impactful. They get to work with industry and municipalities on their research projects so that their research often is finding real answers to real questions industry or municipalities could not resolve on their own.

“Obviously, as a university our mission is to educate students, but when we are able to do that in a way that changes students’ career trajectory, improves opportunity in our city and enhances quality of life for its citizens, that’s a transformational approach to fulfilling our mission.”