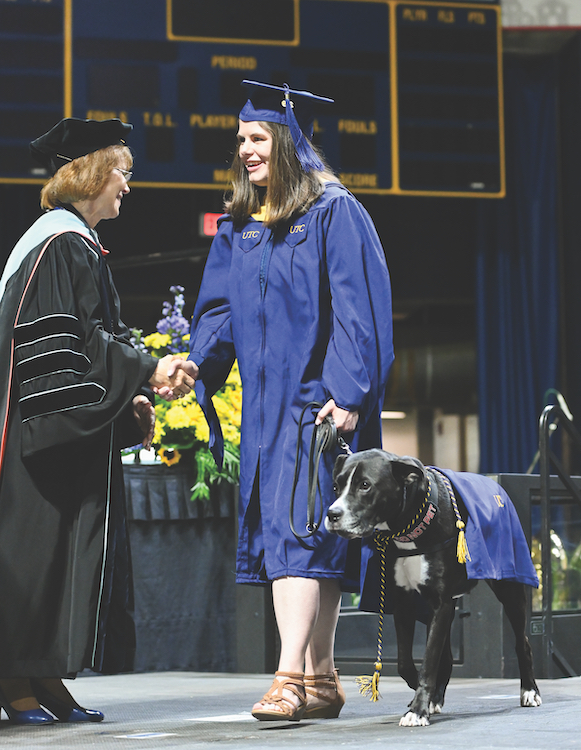 Andrea Fuchs and her service dog Zorro walk across the stage during graduate commencement in December 2019.

Challenges and unexpected situations occur for most college freshmen, but Andrea Fuchs faced something uniquely difficult.

As a high school graduate from suburban St. Louis, Fuchs was excited to be leaving her hometown and on her way to study journalism at the University of Missouri. But the month before moving into her residence hall, she started having debilitating health issues.

Fuchs was diagnosed with and still has an autoimmune disease that weakens her whole body. Walking became difficult because Fuchs didn’t have the strength to stand. Seizure-like episodes started ramping up in severity and included dizziness, headaches, loss of muscle strength and double vision. The disease made it difficult for Andrea to move her legs; she was easily fatigued. Eventually, she wound up partially paralyzed and in a wheelchair during her freshman year at Mizzou.

In high school, Fuchs was a multi-sport athlete, competing in volleyball, soccer and gymnastics, but the disease progressed to where she was unable to do any of the competition that she loved and missed. “I had to learn very quickly a drastic change in life. I was an athlete and had to change to a wheelchair,” says Fuchs, who eventually made her way to UTC and earned a master’s degree in social work in 2019.

The couple moved to Chattanooga in 2016 when he was hired as associate dean of students at UTC. Andrea Fuchs enrolled at UTC and, despite her disabilities, completed her master’s.

She fought through those difficulties and spent three years managing her health while taking courses full-time in Missouri. She tried different types of classes, including online courses, night classes or courses with other options, but it was difficult. Ultimately, she had to cut down her class load for her undergraduate education. The constant issues, fainting episodes and lack of mobility took their toll.

During this time, she was in her wheelchair part-time, but one day became fully paralyzed after picking up a simple item.

“I was just lifting something in my wheelchair and twisted my back … I went from needing my wheelchair most of the time because I could still walk some to being fully paralyzed,” she says.

But she still managed to earn a bachelor’s degree in social work.

After moving to Chattanooga, her first year consisted of visiting Siskin Hospital for Physical Rehabilitation four to five times a week for one to two hours each day for therapy. The effort and hard work eventually helped get her out of the wheelchair and walk with minimal assistance. Learning to walk again was “incredibly weird,” she says. “It’s kind of frustrating. Because you’re like, ‘This was so simple when I knew how to walk the first time.’ This didn’t feel like so much work and brainpower for ‘How do I move this foot?’”

After about a year, Fuchs met her service dog Zorro, whom she started training when he was 10 months old. He has been her constant companion for five years. The 80-pound black Labrador retriever is cute, but he’s much more than that. He’s a huge piece of Fuchs’ independence. She says he’s part of the family and Brett lovingly calls him “Son.”

Zorro helps Fuchs get out of chairs and, once she’s up, he helps her stay upright because she cannot feel her feet. One of his most critical abilities is sensing when she’s about to have an episode. He starts licking her hand and continues to lick until she acknowledges him so he’ll know she understands what he’s telling her. How dogs can sense seizures is not totally understood, but one theory is a person’s scent changes just prior to having one.

Once she had Zorro at her side and was more mobile, Fuchs began studying toward her graduate degree at UTC. There were certainly struggles along the way, but teachers and administrators helped her by making sure study materials were online and by giving her extensions for assignments at times. She also has equipment that recorded the lectures.

“That meant listening to the four-hour lecture all over again,” she says.

Her struggles have been fairly constant throughout, forcing her to fight for everything she has. She regularly deals with insurance companies, health-care providers and college, all while holding a full-time job at Helen Ross McNabb Center, which offers outpatient mental health services. These activities bring their own share of problems, but Fuchs has learned to communicate her needs and also learned her legal rights.

“I can’t expect for it to be done right unless I tell someone exactly what I need,” she says.

She worked two internships during her time in the graduate social work program, one in the Disability Resource Center, which she says “was really a great avenue for me to learn what resources we had on campus and what things needed to be improved.” She also worked as an intern at the Helen Ross McNabb Center. Today, she serves as a supportive living team leader at the center.

“My internship helped others realize that, instead of my disability being a barrier or hindrance, it was really a strength of what I brought to my internship, employment and mental health treatment,” Fuchs explains. The McNabb Center also allows her to work a flexible schedule and have Zorro with her at work.

“My 40-hour, full-time job is set up on a six-day schedule which allows me to work at varying times,” she says.

The flexibility is crucial because she still has days when her health issues overwhelm her. Sometimes she’s knocked down by little things that most of us take for granted. For example, she avoids taking showers in the morning because she’s just too worn out after them. “I can’t expect myself to do as much as before my illness or to the level of my peers,” she says.

Despite the obstacles, she maintained a 4.0 GPA in her master’s program, something she was unable to do with her undergraduate degree. She says her accomplishments at UTC showed that “I could do what everyone else could do; I just needed it adapted.” It has also taught her a lot about herself. “It’s kind of shown me that I could push myself a little further than I thought, but also taught me how important taking care of myself is.”