What’s it like to be a woman in science? 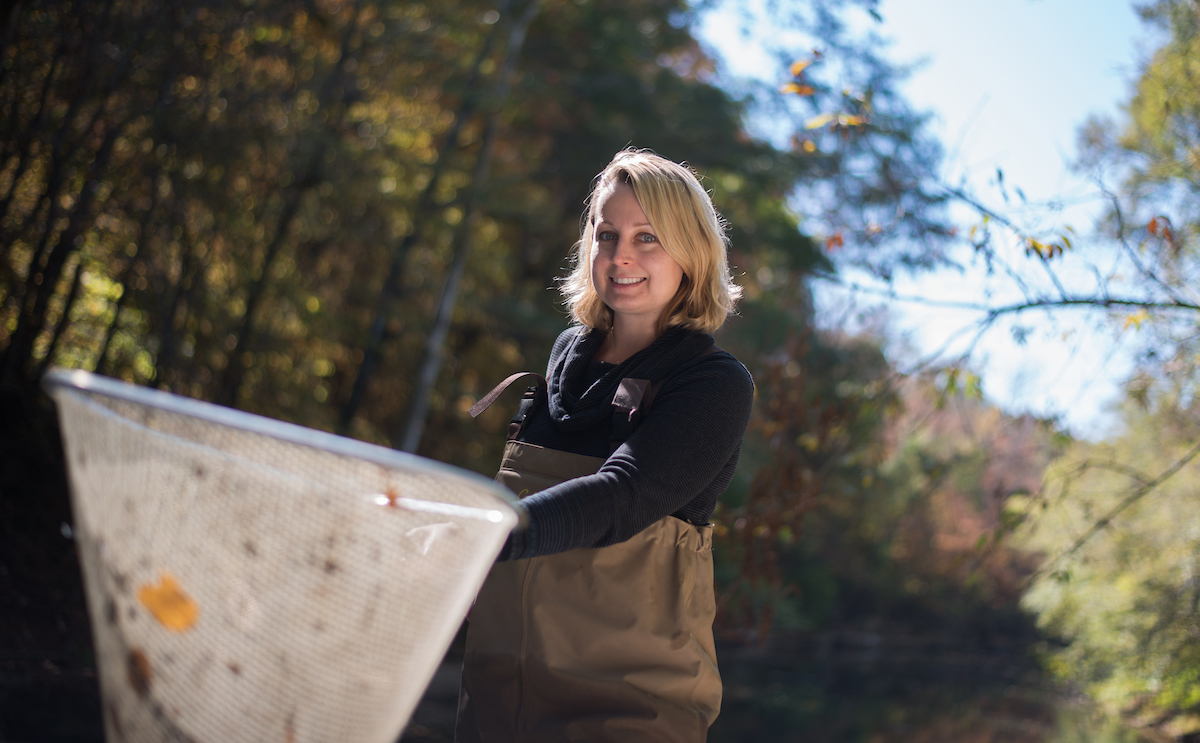 Hope Klug, an associate professor in the Department of Biology, Geology and Environmental Science, says being a woman in science can sometimes be a bumpy road.

In recognition of Women’s History Month, we’re highlighting the stories of women from across campus, sharing their passion, pride and advice for future generations. Meet the women of UTC.

Hope Klug was 14 and attending a marine biology camp near her home in West Florida when her passion for biology really took root.

“This experience was the first time that I realized a career in science was possible. I’d always been curious about the natural world, but this experience is what led me to pursue biology,” Klug says.

A UC Foundation associate professor in biology, geology and environmental science at the University of Tennessee at Chattanooga, Klug says a study abroad experience in Australia with many opportunities for dives and fieldwork were icing on the cake. But just as important were mentor relationships with fellow female scientists.

“I was very fortunate to have a range of women mentors and advisors during undergraduate and graduate school, as well as during my post-docs, and their support helped me gain the confidence to be a strong researcher and educator,” she adds.

Mentorship is still vital to her today because, although approximately 50 percent of the Ph.D.’s awarded in biology are awarded to women, women make up a relatively small proportion of tenured faculty in the U.S., she notes. Her mentor relationships, especially with fellow female scientists, have helped her in the upstream swim.

“Women face a lot of challenges in academia, including lower retention and tenure rates, so it’s important to have supportive colleagues,” she explains. “In my department, I’ve really appreciated having a few women that I can discuss issues with, and in particular, I regularly seek advice from the woman who went through tenure before me.”

Jennifer Boyd, professor and associate department head of biology, geology and environmental science, echoes Klug’s sentiments. It’s tough to be a woman in science, but “being able to talk with other women who understand my experiences has helped me to feel supported and, in turn, I hope to support other women similarly,” Boyd says.

Boyd considers herself a late bloomer when it comes to research. After pursuing dual degrees in English and environmental science, she began graduate school in a top science journalism program.

“Part of the program required me to engage in hands-on research with an advisor on campus, and I chose to work with a researcher who focused on the interactions between plants and climate. After a couple of semesters, I became really involved in the work to the point where I didn’t want to leave the lab and field,” she says.

With the support of her advisor, she decided “that it made more sense to be a scientist who writes than a writer who does science.”

In the non-science realm, Boyd is most proud of her two children. When it comes to science, Boyd finds immense pride in her current research exploring the whys of species rarity, which is sponsored by the National Science Foundation.

“I invested so much hard work in the proposal that led to this project; it forced me to delve deep into the current state of knowledge and think creatively about how to approach the study of rarity –so it was very rewarding to have my efforts pay off,” Boyd says. “I’m also really proud of the collaborative research team that the project brought together (from Austin Peay State University, Seton Hill University, and the University of Georgia) and the fact that we are all moms in science. It’s been great to be a member of such a supportive team.”

Collaborative research is a pride point for Klug as well.

“I work with researchers at various universities across the world, and it’s wonderful to see projects grow and flourish when people are working together in a productive manner,” she explains.

She’s most proud of her work with students.

“It’s really amazing to work with undergraduate and graduate students and see them take a project from the early stages of development to publication. I’m always impressed by the creativity of my students,” Klug explains.

Constant criticism makes being a scientist tough, but that criticism can be a tool for success.

“I’ve learned to take constructive criticism to improve my own work, and this has allowed me to publish high-impact papers, secure large grants, and be a better educator,” Klug says. “Some people are just miserable and will put you down in a non-constructive way when you’re succeeding, though, and it’s important to be aware of that also. I always encourage my students to be receptive to constructive feedback but not allow the negativity of others to get them down.”

“Become aware of the common issues that women in science face even if they aren’t being experienced firsthand,” she says, because many women have faced these issues, there’s a chance that new career scientists will, too.

From equity offices and advocacy centers to organizations like the national American Women in Science or Women in Natural Sciences at UTC, identify the resources around you, Boyd says. Lastly, don’t underestimate the value of strong mentors.

“Seeking out a female mentor either formally or informally is also really important, and keep in mind that she doesn’t have to be in the same department and group at work,” Boyd says. “Look for a mentor with a career and/or work-life balance that matches your aspirations and realize that multiple mentors can provide support in different areas.”