Podcast gets guys to open up about themselves 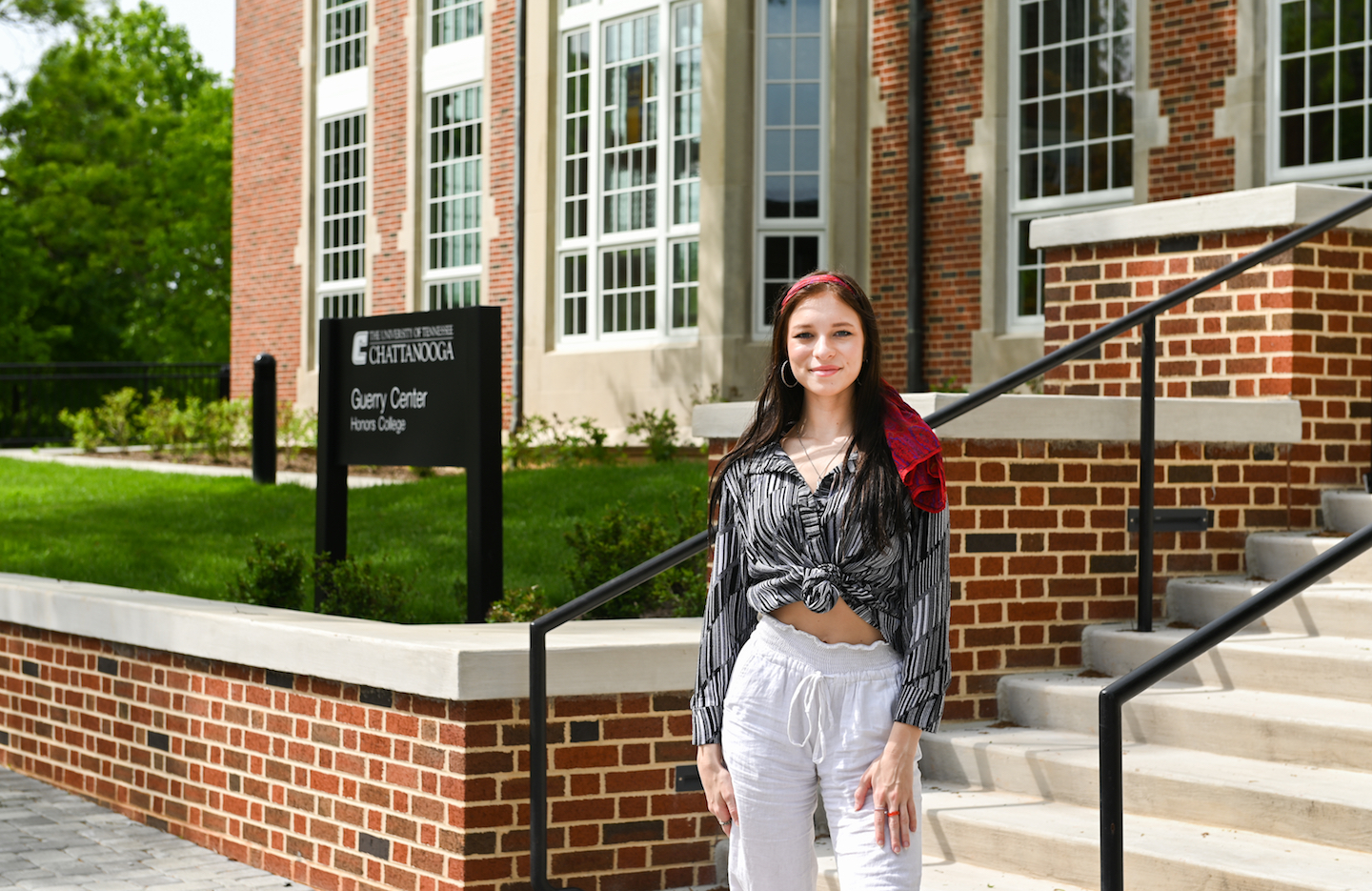 Pandemic. Tornadoes. Neither held back  Madelynne “Maddi” Thompson from finishing her thesis at the end of the semester and also creating a compelling podcast series.

Thompson, a Franklin, Tenn. native, is a Brock Scholar in the University of Tennessee at Chattanooga Honors College, which basically means she’s the best of the best. Thompson always knew she was required to complete a thesis at the end of her senior year, but she wasn’t looking forward to it.

“I’ve dreaded this thesis my entire four years of college,” says Thompson, who is majoring in communication with a minor in business administration.

It wasn’t until Thompson talked with Gregory O’Dea, associate dean of the Honors College, that she learned her paper could be intertwined with something she loves — podcasting.

“I love talking to people and hearing their stories and putting that together in a unique way,” Thompson says. “So I figured that, instead of doing something like a survey, I wanted to do something to really hear people’s stories.”

Thompson’s research deals with objectification theory, which seeks to understand the experience of being female in a culture that objectifies the female body.

“The theory initially was created to describe an affliction that affects women,” she says, “but I just started to wonder if any of those concepts remain true for men.”

The result is an original four-episode podcast series called One of the Boys, in which Thompson’s male subjects talk candidly about a subject men don’t usually speak about.

First, Thompson asked Jessica Freeman, assistant professor in the UTC Communication Department, to be her thesis director. Freeman agreed and was excited about the multimedia element.

“One of the big limitations of scholarly research is that we often don’t adequately translate it into terms that can help folks outside of academia,” Freeman says. “Maddi’s series of podcasts, informed by scholarly literature, married the best of research with an accessible platform for public discourse. I love that she made her findings so accessible.”

Next, Thompson turned to Will Davis, podcasting instructor and producer at WUTC-FM 88.1. She took two of Davis’ classes and excelled at audio storytelling.

“Maddi is a multimedia artist and she could have told this story in any number of ways,” says Davis. “I’m happy she chose podcasting.”

Davis agrees with Freeman that the popular medium broadens the appeal of Thompson’s thesis.

“Podcasting is a great way to bring people into scholarly research,” he says.

Finally, Thompson recruited 10 male UTC students who agreed to talk to her about their bodies, how body norms were instilled in them as young men, male body representation trends in the media, and how our culture allows men to speak about body image.

Thompson is happy with her thesis, especially the podcasting element, since it curbs the listener’s ability to know how the participants look.

“When talking about body image issues or insecurities, denying the listener the opportunity to compare or even know what the person’s body looks like adds an interesting aspect,” she says.

“I’m not exaggerating when I say that Maddi is among the best students I’ve worked with. The pandemic and online classes would have thrown anyone for a loop, but as usual, Maddi took it in stride,” Freeman says.

The anxiety Thompson felt about completing her thesis experience ended on a proud note.

“I ended up really enjoying the process,” she says. Thompson is graduating from UTC in May and pursuing career opportunities in Nashville.

Tagged with: Gregory O'Dea jessica freeman Maddi Thompson One of the Boys podcast