Watson refused to let roadblocks stop her from reaching her goals 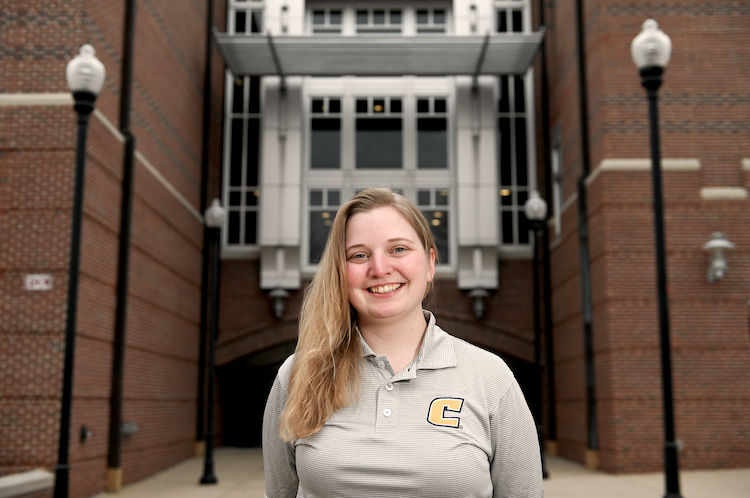 When Erin Watson walks across the commencement stage on Saturday, April 24, those steps will signify more than just earning a bachelor’s degree.

Earning a degree in mechatronics at the University of Tennessee at Chattanooga, her process was a years’ long feat of earning multiple degrees while working 30 to 35 hours a week, volunteering and, well, having a life.

But when she talks about the work it took to get where she is today, she’s not self-promoting. She’s humble and almost shrugs it off. It’s like you’re talking to her about what she had for dinner yesterday. It’s no big deal.

While earning an associate’s degree in engineering from Chattanooga State Community College, she was the only woman in her class from beginning to end. She started the program with a class of 12 people, by the end of it there were only five.

But once she graduated as a certified technician and was working full-time in the field, she started hitting some bumps, especially when she would voice concerns to higher-ups about inconveniences or less-effective processes. She was always met with the same responses:

“What are your credentials?”

“Are you an engineer?”

In the face of that frustrating process, she decided that, if no one else was going to help, she would be the solution.

“I figured if I went back to college and got an actual engineering degree from a university, maybe I could put myself in that position and I could fix problems for someone else,” Watson explained.

With her cool demeanor, she makes it sound easy. Watson admitted the process was anything but.

“I would probably just try to give myself more encouragement. I went through a period where I was depressed and discouraged and I felt like I was never going to make a difference.

“I had a lot of support from my family, but as a female in a male-dominated career path, you just want encouragement from someone who understands. Someone who can tell you it will get better. Because It has gotten better.”

Eventually, she found a way to be that voice of encouragement and education for local students through the College of Engineering and Computer Science ambassador program. Her involvement began with the encouragement of her manager, Nicci Brewer, while interning at Tennessee Valley Authority (TVA).

“My manager was very supportive and she said, ‘If you have an opportunity to get involved on campus and volunteer, definitely do that.’”

Watson applied for the ambassador program, giving her the opportunity to visit local students from kindergarten through community college, introducing them to engineering and computer science programs.

UTC Outreach Coordinator Sara Jackson said when Watson interviewed for the position, she obviously ticked all the boxes. But she was going to have some huge shoes to fill.

“It took some gumption to actually apply because we have former ambassadors at Stanford. We have ambassadors who have won National Science Foundation grants to go to any graduate school they want.

“When Erin came in, she checked boxes. She was female. She was in mechatronics. She was non-traditional. I could use all those things,” Jackson explained.

“Her personality didn’t really shine, though. So I hired her because she checked boxes, not because of who she was.”

Jackson later learned that, during the interview, Watson was so sick she had to go straight to the emergency room after they spoke.

“She powered through and didn’t tell me,” Jackson added.

Later, Jackson would see just how much personality Watson had, and how she would step up and deliver even at the beginning of the COVID-19 pandemic when student outreach seemed impossible.

Watson would personally call prospective students and host telephone chats so they could dial in and hear the ambassadors talk about their college experiences.

“Erin was instrumental in leading those charges and really came through for me at a very dark time,” Jackson said.

In addition to leadership, Watson has added new depth to the college’s outreach program.

“Because we have her, outreach is not just recruitment,” Jackson said.

“And that’s what she exemplifies. The equalization of education and how she can have the same credentials as a man and be considered the same level in the engineering world.

“Her word should carry equal weight. I think that’s amazing because that’s very difficult in mechatronics, which is still extremely heavy on the male side. So, I’m very proud of her.”