Frozen in Time: Campus capsules offer glimpse of the past, hope for the future 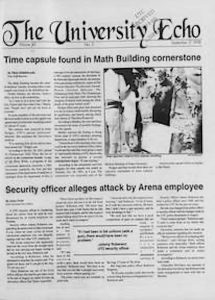 In 28 years, the University of Tennessee at Chattanooga class of 2049 has not one but two time capsules to dig up on campus.

The graduating class will uncover materials frozen in time from one century-year-old box and another that’s 50 years old.

In 1949, senior Richard “Dick” Neidhart convinced classmates to bury a box of trinkets for a senior class project. The plan? It would be opened by the University’s graduating class 100 years later.  That time capsule, the class of 1949’s last hoorah at the University of Chattanooga, was buried on May 13, 1949, just outside Patten Chapel.

According to the University Echo newspaper, most students were excited about the project. A few capsule critics complained they would not be alive to see the box unearthed in 2049. Indeed, Neidhardt passed away in 2009, but he had the foresight to invite any 1949 graduate to write a note of regret to the class of 2049 for inclusion in the capsule.

The Century Crypt—as it’s labeled at its resting place—is said to contain a copy of the 1949 Moccasin yearbook (which is dedicated to the class of 2049) among other University publications, sorority and fraternity memberships pins, test tubes with seeds (have those plants changed over the years?) and other items.

Notes from the eve of Y2K

Advocating for a communal green space in the heart of campus, they changed the campus plan trajectory, and a student park was created in that space instead. At its dedication in 1999, something extra was planted to resurface 50 years later.

Included in the 1999 time capsule is an October issue of the University Echo. Editor Jacob Boyer wrote a letter to future readers in which he anticipated the upcoming World Series (Atlanta Braves vs. the New York Yankees), describing Y2K millennium fever and the on-campus dining drama of switching from Taco Bell to Burrito Express in the University Center.

“The nineties have been an exciting decade. I’m sure they pale in comparison to your time, though,” Boyer added.

“Nevertheless, we’ve had the Koosh Ball (don’t ask), the Gulf War (we know), the beginning of the commercialization of the Internet (how’d it all turn out?) and more drug-addled dead rock stars than we even want to think about.”

These are not the only instances of buried timely treasure on campus. During demolition of the old math building in 1998, a tin box was found in a cornerstone of the building. Its contents had been sealed and preserved since 1901.

The 97-year-old box held, among other items, a Bible (UTC, known as Grant University at the time, was affiliated with the Methodist Episcopal Church), a 1901 University yearbook and catalogs from various academic departments.

In a 1998 story in the University Echo that describes the finding, UTC special Collections Librarian Holly Hodges, said records show there are multiple capsules embedded in most campus buildings. Where will the next one turn up?