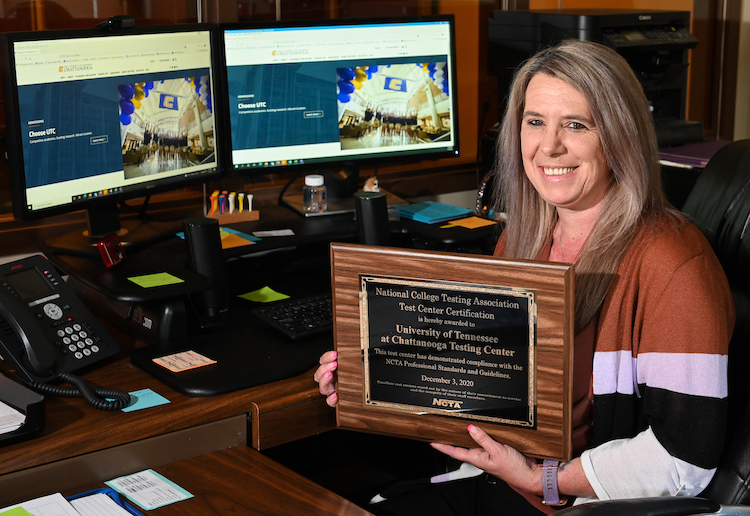 Cathy Jackson came to UTC in June 2020 as manager for the Testing Center.

The University of Tennessee at Chattanooga Testing Center is making it more convenient and accessible for students and community members to take the tests they need for everything from taking the next step in their careers to getting into graduate school to earning their boating license.

The UTC Testing Center, located in Hooper Hall, earned national recognition with the Test Center Certification by the National College Testing Association (NCTA) as one of only four NCTA-certified testing centers in the state. To do so, it must meet rigorous criteria and maintain high test administration standards.

When Cathy Jackson came to UTC in June 2020 as testing center manager, she had a long list of ambitious goals. At the top was NCTA certification.

“I felt that it was so important because you had the backing of not just colleges in your state, but NCTA is recognized nationwide,” Jackson said.

“There are unlimited resources for testing centers, and it’s easier to branch out and bring in new testing vendors when you have something like the NCTA certification as a backing for the integrity of the testing center and the staff.”

Jackson wasted no time getting to work. In July 2020, she put plans in motion and, by December of that year, the testing center was certified.

“She was dedicated and made so many efforts toward getting it done,” explained colleague Cindy Taylor Williamson, director of assessment and Southern Association of Colleges and Schools Commission on Colleges liaison in the Office of Planning, Evaluation and Institutional Research at UTC.

NCTA certification means the testing center has the ability to administer more types of tests, such as those for admissions, certifications or licensures, and making them more accessible not just to just UTC students but the community as a whole.

For a paraprofessional exam that the testing center hadn’t administered previously, Jackson noted that someone drove in from Sevier County just to take the test. The UTC Testing Center was the closest place the person could find to take the test needed for a new job.

The UTC Testing Center is now fully-funded for the Defense Activity for Non-Traditional Education Support Subject Standardized Tests and the College-Level Examination Program for veterans and active-duty military.

With the funding, veterans and active-duty military can take these exams—offering college credit through testing—at the UTC Testing Center. They do not have to pay for the exam or proctoring fee, Williams explained.

“Having that option for military is a huge deal.”