by UTC Communications and Marketing October 8, 2010

A new initiative at The University of Tennessee at Chattanooga created to prepare students in science, technology, engineering and mathematics (STEM education) for secondary teaching careers will receive nearly $1.8 million from the State of Tennessee. 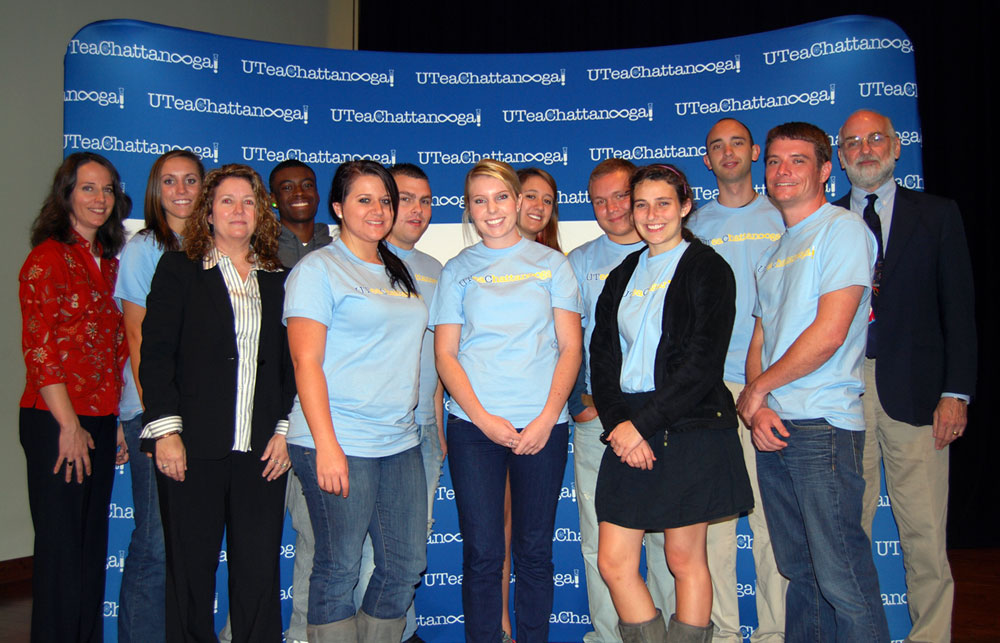 Faculty and students from the UTeaChattanooga program

The Tennessee Higher Education Commission (THEC) and the Tennessee State Department of Education (TDOE) has elected to support UTeaChattanooga with funds recently awarded to Tennessee through the Race to the Top program. UTC will receive the funding over the next four years and has committed to invest $2 million over the same time period.

The UC Foundation has also committed $500,000 to serve as seed funds for an endowment that will sustain the UTeaChattanooga program beyond the terms of the grant period. In addition, the Volkswagen Group of America, Inc. has made a $1 million contribution to UTC which includes an earmark for STEM education which will be used in part to support UTeaChattanooga.

“There is a critical need for more and higher quality math and science teachers in Tennessee, and UTeaChattanooga takes a positive step forward in addressing this need,” said UTC Chancellor Roger Brown.

Most UTeaChattanooga students will earn a bachelor’s degree in a math or science field as well as licensure to teach in that field within four years.

“This initiative is a great incentive for science and math majors to consider teaching as a career choice. Previously, students majoring in math or science subjects had to take so many additional education courses to receive licensure that it put them beyond the four-year graduation timeline, which often dissuaded them from considering teaching as a career option,” said Dr. Sandy Watson, co-director of the program.

In addition, the first two courses in the UTeaChattanooga curriculum (Step 1 and Step 2) will be tuition-free for interested math and science majors.

“The students take the first two courses to get a good sense of what teaching is all about and get experience teaching in area public school classrooms. Beginning next year we will provide paid scholarships and internships to many students who have completed Step 1 and 2,” said Dr. Steve Kuhn, co-director of the program.

In each course in the UTeaChattanooga curriculum, students will spend time in UTC’s partner K-12 schools receiving valuable practice teaching experience, providing a low risk introduction to teaching with exceptional and experienced high school teachers; education courses are specifically designed for prospective mathematics and science teachers; and additional support will be provided for at least the critical first two years these new teachers are in the classroom after graduation.

UTeaChattanooga is modeled after UTeach, a highly successful math and science teacher preparation program at the University of Texas at Austin. The UTeach program was established in 1997 as a new and improved way to introduce undergraduate math and science majors to secondary school teaching. By offering compact degree plans, early teaching experiences and financial assistance for undergraduate students, UTeach provides a platform for raising the quantity and quality of mathematics, science and computer science teachers in secondary schools.

UTeach certifies more than 70 students every year at the University of Texas at Austin. More than 90 percent of these UTeach graduates immediately go on to teach in their respective fields, and over 80 percent continue four years after starting, compared to only 60% nationally.

Additionally, almost half of UTeach graduates teach in schools where more than 50% of students receive free or reduced price lunch.

The UTeach Institute was created to expand and replicate UTeach at universities in Texas and across the United States.

“UTeach has proven to be a very successful model for preparing our next-generation science and math teachers, and we’re very excited to have the opportunity to replicate the program at universities across the United States,” said Mary Ann Rankin, dean of the College of Natural Sciences at the University of Texas at Austin. “The more the program spreads, the more fine teachers we will be producing to inspire and educate our nation’s children to discover and create new science and technology for the future.”