A task force appointed to address chronic veterans’ homelessness in Chattanooga gathered recently for the first time on the UTC campus.  Veterans, including students from UTC, community leaders, service providers, and city employees will work together to address housing and find funding for homeless veterans in our city.  The task force meeting was held June 6. 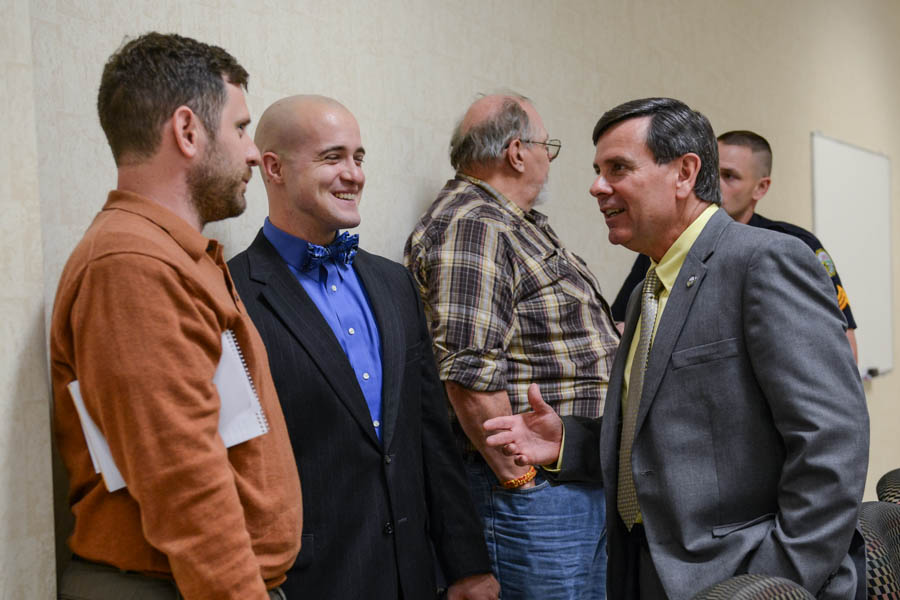 One month earlier, Chattanooga Mayor Andy Berke and City Council Chair Chip Henderson came to UTC to meet with members of the UTC Student Veterans Organization and UTC faculty members who served in the military to discuss the issues veterans face during service and upon their return home.  At the meeting, Berke signed a proclamation to eradicate chronic veterans’ homelessness in Chattanooga by December 2016. “This goal is achievable,” Berke said.  “We’re going to do it.”

Daniel Wagner, President of the UTC Student Veterans Organization, attended the first meeting and he is part of the task force. “The turnout for the first task force meeting was fantastic!” Wagner said enthusiastically.  “The turnaround by Mayor Berke is great.  From the time he called us to discuss this situation until now it’s been one month.  We’re getting the ball rolling—this issue is high on the mayor’s priority list.  I’m very optimistic.” Wagner was instrumental in helping the task force meet on campus.  He is also interested in helping to identify veterans who are homeless so that their needs can be addressed.

In Berke’s comments to the task force, he said he realized in the last 45 days that “people want us to go in this direction.” He wants Chattanooga to join other communities in taking responsibility for this most vulnerable population.  He said research shows that 95 percent of homeless veterans prefer to have a home.  He cautioned the task force about imagining the stereotypical single veteran living on the streets, saying you can find homeless veterans with their families in Walmart parking lots.

According to Veteran Affairs, at any time in Chattanooga there are about 150 veterans who are homeless and 20 percent who are chronically homeless. Due to the transient nature of this problem, it is likely that many more go uncounted. Homelessness is often defined as living homeless for 12 months or having four episodes of homelessness in three years.

For some veterans, holding on to the home they have is also a challenge.  City Council Chairman Henderson described the situation of a 92-year-old WWII veteran in Lookout Valley. Henderson explained it took fundraisers and volunteer help to give the man much needed assistance with his house, which had been condemned.  “The roof leaked, the ceiling was falling in, the outside had grown up,” Henderson said.  “Two weeks ago the work was completed.  This man landed on the beaches of Normandy.  We helped him stay in his home.”

Berke said Chattanooga is the only city in Tennessee that has vowed to take action for homeless veterans.  He called it “a great opportunity for our city to show who we are.”