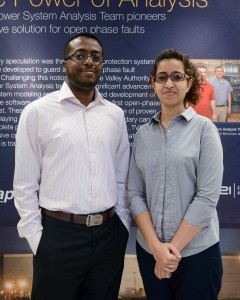 Graduate students Mariana Kamel and Haytham Saeed were recently honored for their contributions in an award winning approach to open phase faults. The students partnered with TVA’s Power System Analysis Team and provided research for a “first-of-its-kind solution” that won the Equipment Reliability Award at this year’s Nuclear Energy Assembly hosted by the Nuclear Energy Institute (NEI).

“The objective of the research was to develop a good understanding for the open phase conditions in power transformers,” Saeed explained.

During their research, the students questioned how transformers behave under certain conditions, and the current transformer modeling method. The project’s solution provides protection from open phase faults, potentially saving TVA and other nuclear operators millions of dollars.

“This relationship with TVA has provided us with the chance to look at a real-world, cutting-edge problem, and contribute in providing a good understanding to this problem,” Saeed added.

“Dr. Karrar and Dr. Eltom provided excellent guidance and directing in this project.” Kamel continued, “Working on this project expanded my knowledge in power transformers; you can say I became an expert on how to model them, which I think will have a great impact on my future as a power system engineer.”
Kamel and Saeed  recently finished another project with TVA on Geomagnetically Induced Currents (GIC) blocking devices on protection schemes. Their paper describing their findings will be presented at the fourth Future of the Grid Symposium sponsored by the CIGRE US National Committee (USNC) and the Electrical Power Research Institute (EPRI) in Chicago next fall.