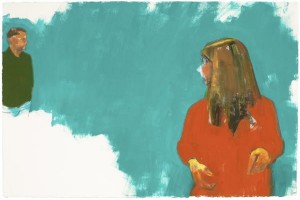 Vogel’s exploration of human interaction, Encounters, is on exhibit at Sewanee’s University Gallery through April 10.

Christina Vogel, Assistant Professor, Painting and Drawing’s solo exhibition Encounters is currently on view at Sewanee’s University Art Gallery, less than an hour’s drive from Campus. The Encounters exhibit began in February and will run through Sunday, April 10.

“It has been a great experience working with Sewanee and I have been excited by the programming that has accompanied the exhibition. I led a figure drawing workshop for students, staff, alumni, and community members in the gallery space, which was great fun, and since Encounters opened there has been a great response from the Sewanee community. Professors have brought students to write in response to the paintings and there have been dance performances in the space, with choreography based on the work. It has been a meaningful experience,” Vogel explained.

Vogel received a 2014-2015 Research and Creative Activity grant to support her creative research. The grant provided partial funding for her artist residency in Vermont, and helped fund her studio space here in Chattanooga. But, this grant was more than just needed financial support; the grant’s recognition of Vogel’s promising creative research sparked a series of developments in the artist’s career including two recent artist residencies, grant funding, and multiple exhibits featuring her work in area galleries.

Encounters was born out of Vogel’s “intensive research period” during a four-week residency at the Vermont Studio Center (VSC) in Johnson, Vermont.

“In my Vermont studio, I made paintings and drawings concerned with human interaction, depicting chance meetings within groupings and gatherings, and presenting ordinary encounters that describe yearning, discomfort, or uncertainty. I forged connections with my fellow artists-in-residence, national and international visual artists and writers based in diverse locations including Boston, Detroit, Minneapolis, New Haven, New York, Salt Lake City, and New Zealand.”

Back in Chattanooga, Vogel’s work continued to thrive after her residency in Vermont. Energized with a sustained momentum from the residency, she continued the work with human interaction, then in September of 2015 she showed a series of the drawings she had made in Vermont as part of a two-person exhibit at Covenant College, Lookout Mountain, Georgia, with photographer Amy Johnson called Apart. The momentum continued in December 2015 as Vogel focused on this body of work during a “brief but prolific” three-week residency at the Virginia Center for the Creative Arts.

Visit Vogel’s website for more information about her work and for a look into Encounters.