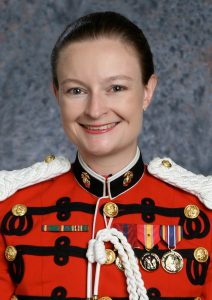 Master Gunnery Sgt. Jane Cross, a  UTC graduate, will take part in the 58th Inauguration of the President of the United States on Jan. 20, 2017, as a member of “The President’s Own” United States Marine Band. This marks the Marine Band’s 55th inaugural appearance.

Chief Librarian Master Gunnery Sergeant Jane Cross joined “The President’s Own” United States Marine Band in May 1997. She was appointed chief librarian in September 2008 and Support Staff Section Commander in 2013. Master Gunnery Sgt. Cross began studying the clarinet at age 9. After graduating from Morristown-Hamblen High School East in 1993, she earned bachelor’s degrees in music and English from the University of Tennessee at Chattanooga in 1997. In 2003, she earned a master’s degree in library science from the University of Maryland, College Park.

Prior to joining “The President’s Own,” Master Gunnery Sgt. Cross was a senior airman with the 572nd Air National Guard Band at McGhee Tyson Air National Guard Base in Knoxville, Tenn., serving as a musician and assistant librarian. As chief librarian, Master Gunnery Sgt. Cross prepares music for performances, edits program notes, and assists with maintaining the music library and historic archives of the Marine Band. She regularly represents the band at Music Library Association and Major Orchestra Librarians’ Association (MOLA) annual conferences, where she has given presentations on copyright, licensing, and sheet music acquisition. She also served four years on the MOLA Board of Directors.

The Marine Band will provide music for the Inauguration swearing-in ceremony at the U.S. Capitol, lead the second division of the parade down Pennsylvania Avenue, and perform at the Salute to the Armed Forces Inaugural ball. “The President’s Own” is the only musical unit to participate in all three events.

Research suggests that on March 4, 1801, the Marine Band performed for Thomas Jefferson’s inauguration. An accomplished musician himself, Jefferson recognized the unique relationship between the band and the Chief Executive and is credited with giving the Marine Band the title, “The President’s Own.”