Top Documentaries“Bitter is Better took first place, but other students came in second and third.

You can chat with friends.

All in the same place.

Those are some of the points made in “Bitter Is Better,” a 10-minute documentary produced by UTC students Chad Pasinger, Jesse Hunter and Jake Taylor.

The film examines the mushrooming coffee-shop scene in Chattanooga. There are more than 20 coffeehouses in the Chattanooga area, with locations downtown, on the North Shore, and in Southside and St. Elmo, among others.

Pasinger, who came up with the idea for the documentary and directed it, says such businesses are communal watering holes — or perhaps coffee-ing holes.

“I just think some of the best stories are where people come together, and coffeehouses are a place where people gather,” says Pasinger, who graduated earlier this month with a degree in communications and a minor in political science and public service.

“Also, coffee is awesome. I love it,” he adds with a laugh.

“Bitter Is Better” won Best Documentary at the recent Department of Communication’s student-made documentary competition. Winners were voted on by the audience at the event. 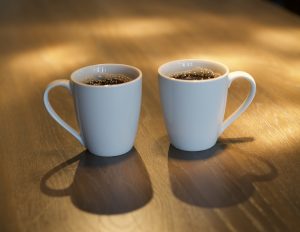 Coffee folks interviewed in the film are revved up about city’s coffee scene, saying it enhances and deepens personal and business relationships which, in turn, helps spur creativity. Words like “community,” “culture” and “conversation” crop up often in “Bitter Is Better.”

“Once you finish one meeting, you’re going to run into somebody else you know, right?” he says in the documentary. “We like to think about this during the day as a collision space where ideas happen so that’s one way we see this space as cultivating culture in the city.”

“Coffee is more than just a cup, it’s a space to come together and collaborate,” way Matt Park, owner of + coffee in St. Elmo.

Making a documentary is pretty much a resume when it comes to the filmmaking industry, says Communications Department Head Dr. Jack Zibluk. A Student armed with a self-produced film “shows that you can do the work.”

“Film is a real growth area within this market,” he adds, so students can take what they’ve learned here and carry it to other filmmaking cities.

Atlanta, for instance, has become a major film destination. “The Walking Dead” is filmed in Senoia, Ga., a small town about 35 miles south of Atlanta, while parts of “Captain America: Civil War” and “The Avengers: Infinity War” were filmed there.

When making “Bitter Is Better,” Pasinger and his partners believed there was story to be told about the city’s coffee culture and, as they made the documentary, they saw the story building itself piece by piece.

“You let the story tell itself,” he says. “You can rearrange it and put the puzzle together and then you have a story,” says Pasinger, who worked as assistant photo editor at the University Echo.

Once they finish tweaking the audio and video of “Bitter Is Better,” the trio hope to submit it to next year’s Chattanooga Film Festival. As for his own career, Pasinger knows he wants to be “a storyteller” but says, “I’m not the strongest writer,” so he figures he’ll tell his tales visually.