Agreements give UC Foundation more ‘control of its own destiny’ 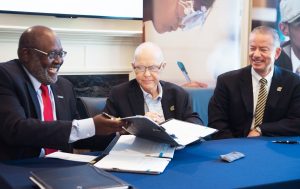 Two agreements signed June 28  give the University of Chattanooga Foundation more “control of its own destiny.”

The agreements — technically known as the Affiliation Agreement and the Employee Service Agreement— shift the responsibility for day-to-day administrative tasks of the UC Foundation from the Knoxville-based University of Tennessee Foundation Inc. to the UTC campus.

Among those duties are employee management and evaluations, salaries, benefits, spending and relationships with financial donors.

“This is transformational” and gives UTC “control of its own destiny,” says Bucky Wolford, the outgoing president of the UC Foundation who has been called the “architect” of the agreements.

“We can raise more dollars and engage more of our alumni at UTC,” says Wolford, who estimates negotiations took about 18 months.

University of Tennessee System President Joe DiPietro couldn’t be at the signing ceremony, held in the UTC Office of Development building, but in a text he told Wolford: “Congratulations and thanks for all the help, patience and cooperation we have gotten from you to this day.”

DiPietro has been instrumental in discussions about the new agreements and has lent his continuing “support and faith in the UC Foundation,” says Bryan Rowland, executive director of the UC Foundation and vice chancellor for Development and Alumni Affairs at UTC.

The new arrangement gives “added flexibility to manage the finances of the UC Foundation locally for the benefit of the students, faculty, staff and alumni of UTC,” he says.

Since the UC Foundation’s creation in 1969, it has given about $118 million to UTC through endowments. As of March 31, the foundation’s endowment was about $127 million, records show. Its initiatives include funding faculty development, student scholarships and partnerships between UTC and others in the Chattanooga community.

UC Foundation supporters will see no changes in the way it handles donations, Rowland says. If you give $100 to the foundation, for instance, the money will still fund programs, scholarships and other UTC-specific goals, he says.

The UC Foundation also will continue to participate in development programs that stretch across the entire UT system, says Rickey McCurry, vice president for Development and Alumni Affairs and Programs for the system and president and CEO of the UT Foundation. The new setup simply gives “clarity” to the UC Foundation’s fundraising efforts so it can “respond more quickly to donors and supporters,” he says.