It’s a hot and humid Tennessee night and Carter Wexler is wiping down the counter of his bar, Big Frog Brewing. Soon, the neighborhood hangout will have a steady stream of customers looking to escape the summer heat.

Though Big Frog has been opened only a year, Wexler has built a loyal clientele, many he knows by name.

But before he opened his bar, Wexler went through a long journey, starting with brewing beer in his early 20s then kicking into high gear after he enrolled in the Veterans Entrepreneurship program (VEP) at UTC. 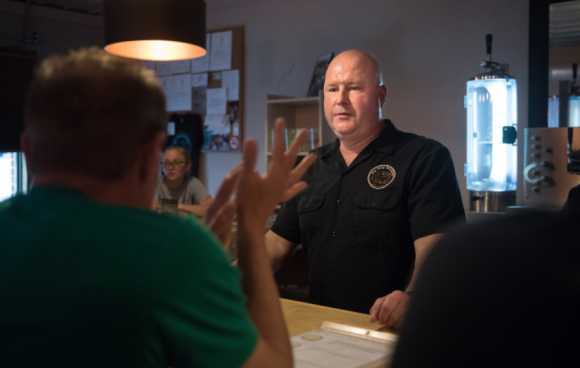 The idea of brewing his own beer came from a UTC chemistry class.

“When I was going to school at UTC in the ‘80s, I had an organic professor that I hit it off with and really enjoyed taking classes from him. He was giving a lecture one day using an example of baking bread to explain something. I went up to him afterward and was talking to him about it when he said, ‘You know, Carter, you can make your own beer, too.’ I was stunned and said, ‘You’ve got to be kidding me!’

“Back then, there weren’t any craft breweries in town and your selection of beer was really limited. We went up to his office and he gave me a recipe to try,” Wexler continues.

For the next few years, Wexler made his own batches of beer, perfecting his recipe through taste tests with his roommates. He also enlisted in the Navy, serving as a surface warfare officer directing amphibious assault ships.

After three deployments in eight years to places such as Liberia, Somalia and Pakistan, he returned to the Chattanooga area to work as a chemical engineer. He continued to brew beer while holding down his day job, eventually making a product he sold to T. Mac, a restaurant located in downtown Chattanooga.

After returning to Chattanooga, Wexler was driving one day when he saw a billboard that would change his life.

“It was an advertisement for the American Dream concert with Charlie Daniels. I’m a big fan of his and wanted to go,” Wexler says. “I read that proceeds benefited the Veterans Entrepreneurship program at UTC. I had never heard of it. I didn’t make it to the concert, but I looked up the program, applied and, luckily, I got in.”

The Veterans Entrepreneurship program is an entrepreneurial “boot camp” targeting disabled and service-distinguished veterans. Designed to teach the “nuts and bolts” of start-up and growth ventures, the program’s curriculum includes a five-week online course to further develop business concepts, followed by an eight-day, on-campus boot camp that covers everything from cash-flow management and marketing tools to legal and human resources issues, all provided at no cost to participants.

“Going through the program taught me a lot,” Wexler says. “I knew nothing about business before starting the brewery. I didn’t take any business classes while I was in college. It was one of the things that really intimidated me. 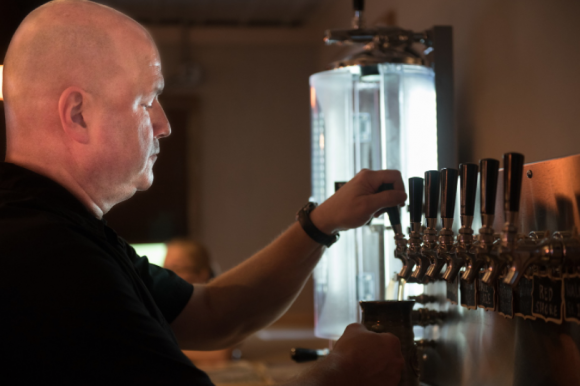 But before starting the veterans program, he had a short conversation with himself.

“I told myself, ‘What are you doing? You don’t know anything about this,’” he says.

His favorite class was on bootstrapping, a business concept based on the old saying, “pulling up by your bootstraps.” An entrepreneur bootstraps a company when he or she starts it with very little money or outside investment and works to keep costs low.

“The professor taught us different ways to get the job done without spending much money. It was really valuable for small business because there’s so many things you have to do and, while it would be nice to just write someone else a check and forget about it, that’s not practical most of the time.”

As the sole proprietor of his business, Wexler describes the networking opportunities from the Veterans Entrepreneur program as “awesome.”

“Now, if I have a question about something, from legal to accounting to HR, I have a whole list of people I can call to get more information,” he says.

A home in Red Bank

When Wexler was searching for a place to open Big Frog, the mayor of Red Bank reached out to him. He met with city officials and got approval to set up shop on Dayton Boulevard.

“Red Bank has been a super community. They really bent over backwards to help me get started and the residents have really embraced us. I like the idea of being a community bar,” Wexler says.

He appreciates the help so much that he named one of his beers, “Red Shore Ale.”

“Red Bank is an up-and-coming community. All that growth from North Shore area is coming this way. It’s is going to be the next happening place to live in Chattanooga.”

Wexler hopes to expand and is currently eyeing the space next door to his current location. But for now, he’s happy where he is.

While he describes owning a business as dealing with “highest of highs and lowest of lows,” he gets sentimental about the relationships he’s built with his customers.

“It’s been a lot of hard work, but also a lot of fun. I’ve met so many great people. One of my regulars got engaged and I got to serve my beer at the wedding reception. This place has enriched my life in so many ways.”