As a music teacher for more than 25 years, Dr. Kevin Ford can tell when something is not quite right during a student performance. It may be in the way a note sounds or how a student holds his or her instrument. After all these years, the UC Foundation professor of music still notices the little things and he knows those little things can make or break a performer.

He had a graduate student who tensed up while she was conducting. Ford could see it in her body and could hear how it affected the music. Ford tried traditional methods to remedy it, but the tension kept returning. Looking for a unique solution, he turned to his wife, Allyson, a UTC alumna and certified practitioner in the Feldenkrais method, to work with his student. 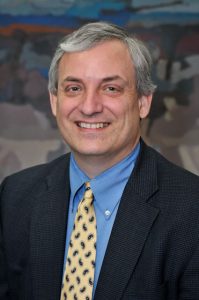 “I was worried she would never be able to get rid of the tension. It was so ingrained. But in just a few sessions, we saw a difference. I’ve seen her conduct since she’s graduated, and she’s doing much better,” Dr. Ford said.

The couple now regularly works with UTC music students using the Feldenkrais method and will be presenting their work and experiences at the World Symposium on Conducting and Choral Music in Barcelona, Spain, this summer.

What is the Feldenkrais Method?

Developed by Moshe Feldenkrais, an Israeli engineer and physicist, the Feldenkrais method is a form of somatic education that teaches people to become more attuned with their bodies and their movement. The Feldenkrais method helps people notice habitual patterns in their daily movements that are causing pain or stress or limiting their functioning and replace them with ones that are more beneficial and efficient. Participants have cited improvements in their range of motion, posture, level of stress and emotional wellbeing after completing a few sessions.

To become a Feldenkrais practitioner, Ms. Ford went through extensive four-year training. In addition to her work at UTC, she has taught sessions at Ballet Tennessee, Chattanooga Music Teachers Club and the Signal Mountain Arts Community Center.

The Feldenkrais method is primarily taught in two ways. During an Awareness Through Movement session, a practitioner will verbally guide a group of students though movement exercises.

“A lesson includes simple, easy guided movements that most everyone can do. For example, I’ll ask people to place a hand on their knee and take note of how that felt. Then I’ll ask them to note of what body parts were involved to make that movement. It wasn’t just the hand, the arm and the shoulder had to move as well. My goal for them is not to solely focus on doing the movement, but feeling what all had to be coordinated to create it,” Ms. Ford explained.

Functional Integration sessions are done on an individual basis. The instructor combines gentle touching and verbal instruction to guide movement.

Though a lesson in the Feldenkrais method involves movement, it’s not like yoga or Pilates where the focus is on building strength and flexibility.

“Feldenkrais isn’t an exercise program. You’re not engaging muscles for the sake of gaining strength. I’m looking for people to connect to the movement of their bodies and gain a greater sense of how all movement is connected through their center. The goal of exercise is to build strength in your core. I want people to build smartness in their core,” Ms. Ford said.

According to Ms. Ford, everyone can benefit from practicing the Feldenkrais method, especially musicians, singers and other creative artists.

“The Feldenkrais method wasn’t initially developed for artists, but we’ve found that it can help with dealing with the difficulties that come with repetitive movements, like playing an instrument or conducting an orchestra,” she said.

“It can help performers drop habitual movement patterns that limit their functioning. Instead, they can learn to find easier ways to move, so they tax themselves less. It makes them less susceptible to suffering from repetitive stress injuries. In turn, it improves the quality of their life and their art,” Ms. Ford continued.

For Dr. Ford, having students become aware of their movements is an important part of music education.

“The Feldenkrais method helps students realize what’s going on in their bodies. Over the years, they’ve developed habitual patterns in their movement that they might not even notice, like tensing their shoulders as soon as they sit down on the piano bench. Through sessions with Allyson, they become more aware of it and from there, can make changes so they can perform more expressively,” he said.

“I sang in a chorus one summer and our conductor had a lot of tension in his body. He was making really fast movements and I was having a lot of trouble singing my part. I turned my head away from him and I could sing it. When I looked back at him, I couldn’t. Any tension that the conductor adopts, the chorus or orchestra will pick up on as well, and it will negatively affect the whole performance. Having a Feldenkrais practitioner come to campus is a good opportunity for students,” he said.