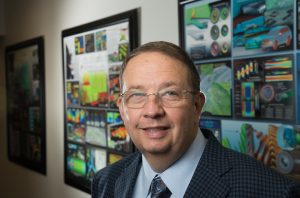 You’re driving down the street, dutifully obeying the laws, when you come to an intersection with a traffic light. It’s green, so you cruise on through.

But the traffic light on the other street also is green and another car heads on through, too. You can imagine what happens next.

This isn’t supposed to happen, especially in a citywide traffic system controlled by computers to make everything more efficient. So what caused the potentially deadly problem?

These days it’s very possible to hack into computer-driven municipal systems that control such things as traffic.

“It’s not hard to do at all,” says Dr. Anthony Skjellum, the new director of UTC’s SimCenter. “Out there it’s the Wild West in terms of security.”

Hacking problems haven’t hit Chattanooga’s Smart City grid, which has the ultimate goal of improving efficiency and capabilities in the city’s systems of transportation, energy and health, but it’s risky to ignore the issue and hope it never happens, says Skjellum (pronounced SHELL-um). Chattanooga has led the charge for installing Smart City grids.

“With a system like Smart City, you build it up with millions of computing and sensor devices and you don’t want them to get hacked all the time,” he says. “Human lives are at risk. Property values are at risk.”

The SimCenter has spent several years working with officials in government, industry and higher education in Chattanooga and other cities, fine-tuning and tweaking Smart City systems. Skjellum’s background in cybersecurity “is an additional angle that we don’t have now,” says Mina Sartipi, leader of the center’s Urban Science and Technology Program.

With hacking a constant threat, Smart City grids needs to be secured so information generated by the systems can be trusted, she says.

“We assume everybody is good, but no, that’s not true,” she explains. “We have to consider the security. How can you trust something? How can you keep an enemy from coming in and just injecting wrong information into your system?”

Through research using its high-performance computers, the SimCenter can create possible scenarios then design cybersecurity methods to prevent hacking and improve the overall performance of systems.

“We’re going to engage in their simulation modeling in the area of cybersecurity and Smart Cities and help them be more successful,” Skjellum says, “so they don’t have to do the things that can’t do as well as they could by working with us.”

John Van Winkle, city traffic engineer for Chattanooga, hasn’t met Skjellum yet, but says he looks forward to working with him and the SimCenter on ideas to improve the Smart City program already underway.

“We want to partner with them as we move forward,” Van Winkle says.

He adds, though, that the two-green traffic-light scenario can’t happen here because of fail-safe technical protections.

Skjellum, who officially started his new job this month, has a long-running background in computer and simulation research. He comes to UTC from Auburn University, where he was director of the Cyber Research Center. He also led research and development in high-performance computing at Auburn’s College of Engineering.

From 2003 to 2013, he was a professor and chairman in the Department of Computer and Information Sciences at the University of Alabama at Birmingham.

Smart City research is only one of the efforts Skjellum plans to pursue at the SimCenter. There also is work with local industries to improve their systems or the manufacture of their products.

“Partnering with the SimCenter means you’ll be able to develop solutions for commercial purposes from the ideas that we develop together that will make you more competitive in the marketplace,” he says.

The center also receives funding from the U.S. Department of Defense, the National Science Foundation and the National Institutes of Health and, in turn, helps with their projects.

Plain-spoken and not enamored of technical jargon, Skjellum promises that, when you work with the SimCenter, you won’t be buried under an avalanche of words that only engineers and computer scientists understand. No one needs that.

“They don’t really care that you’re going to simulate with 64 processors or that the numerical method is just the hottest new numerical method,” Skjellum says. “They care about what it can do and how it translates into the thing that’s economically driven for them.”

With computers controlling more and more systems — both municipal and private — protecting these systems is essential these days, Skjellum says.

“It’s like the analogy of seatbelts in 1960,” he explains. “You had to ask for seatbelts to be added to your car as an extra option. If you wore them, people thought you were chicken.

“And where are we with seatbelts now? People don’t always wear their seatbelt, but the societal norm has changed to: ‘Oh, it’s really stupid if you don’t wear your seatbelt.’”

Technology is having a similar issue these days.

“We’re going through that same sort of adoption/recognition problem because people are not necessarily using good practices or cyber-hygiene on their devices because they set dumb passwords or they visit websites that are bad or they click on things. The human element contributes to lack of security.”