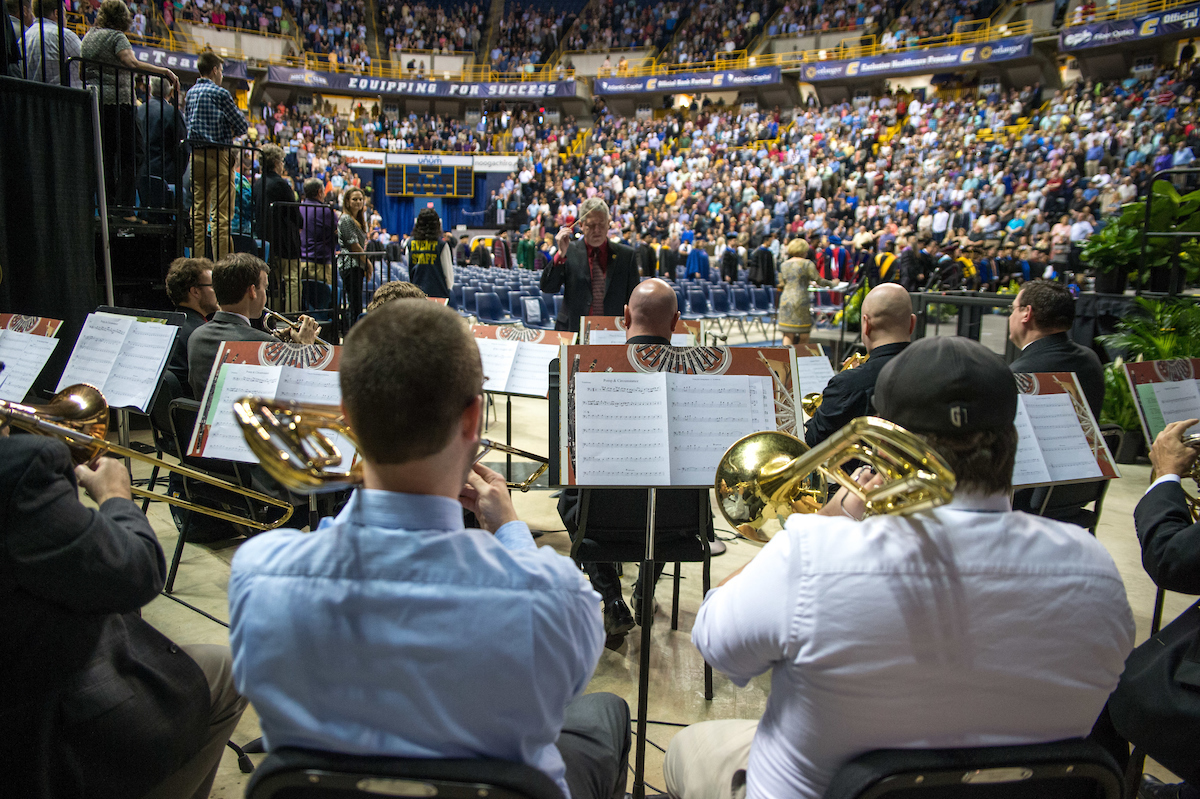 Starting in December, commencement ceremonies will begin and end with music that has a little blue and gold twang.

Listen closely enough and bits and pieces of Chattanooga’s Alma Mater might stand out during the December ceremonies. Parts of the classic “Lookout Mountain o’er us guarding …” are hidden away in Kenyon Wilson’s recessional, “Achievement Unlocked,” written in honor of the university’s 250th commencement.

Hiding things in plain sight is Wilson’s signature move. The associate professor of theory and applied low brass in the Department of Performing Arts Division of Music is known to sneak names, jokes and clever tricks in the music he composes. He even has a three-note motif for his son’s name: Jed. From the moment his son was born, Wilson has included the motif once in every song he’s written, roughly 12 compositions at this point. 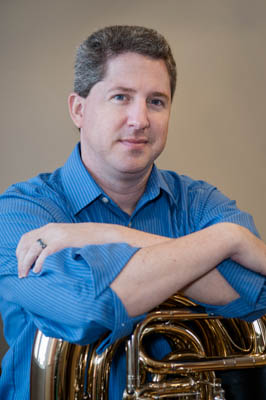 “I like hiding those things,” Wilson explains. “And my students will start doing a ‘Where’s Waldo’ scavenger hunt with my music.”

Wilson first composed a new processional for commencement last May. The stock music played by the commencement brass ensemble felt forced, he says, particularly what was played as the gonfalons (the large banners that represent the colleges) entered the arena.

“And I thought, you know, it would be nice if we had our own music for this.

“I started off with a catchy fanfare and I took our Alma Mater and sliced it up in a way that you won’t know it’s there,” he continues. “I didn’t want it to sound like an arrangement of our Alma Mater, but it is there and it was the source material.”

Music composition took a back seat as Wilson focused on teaching and performing early in his career. But trained as a tuba player, he began putting pen to staff paper regularly around 2007. Since then, he’s written 30 pieces.

His biggest source of pride, he says, is the tribute he composed in honor of the five fallen heroes shot to death in Chattanooga on July 16, 2015: Carson A. Holmquist, Randall Smith, Thomas J. Sullivan, Squire K. “Skip” Wells and David A. Wyatt.

The tribute, “Five,” was described by Mayor Andy Berke as an example of how “music can help crystallize the emotions that we feel and give a moment to heal our broken hearts…”

A consortium of 68 university, high school, community, military and brass bands joined with Wilson to create the tribute for concert band.

To learn more about Wilson’s compositions and hear them performed by ensembles across the world, go to: www.kenyonwilson.com.