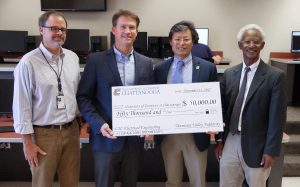 From left, Mark Bowman and Steve Douglas of TVA present a $50,000 check to Dr. Daniel Pack, dean of the College of Engineering and Computer Science, and Dr. Ahmed Eltom, head of the Department of Electrical Engineering.

A research project in the College of Engineering and Computer Science is “a problem solver,” according to Steve Douglas of TVA.

Without TVA’s support, “we would not be able to do what we’re doing here,” said Dr. Ahmed Eltom, head of the Department of Electrical Engineering.

The money funds a project that has discovered a method of diagnosing potential problems within transformers in nuclear power plants that doesn’t involve physically removing the transformer and sending it off to be tested. Onsite testing can save millions of dollars.

“There are very expensive ways of sending them (transformers) back to the test site,” says Dr. Abdelrahman Karrar, who is heading the research project.

The research project “is beneficial to not only TVA but to the whole nuclear industry,” says Douglas.

The UTC research project has been praised at various industry conferences over the past few years. For instance, out of about 1,400 entries, a paper detailing the project was one of four “Best of the Best” award winners at the worldwide Institute of Electrical and Electronics Engineers (IEEE) Power and Energy Conference in 2016.