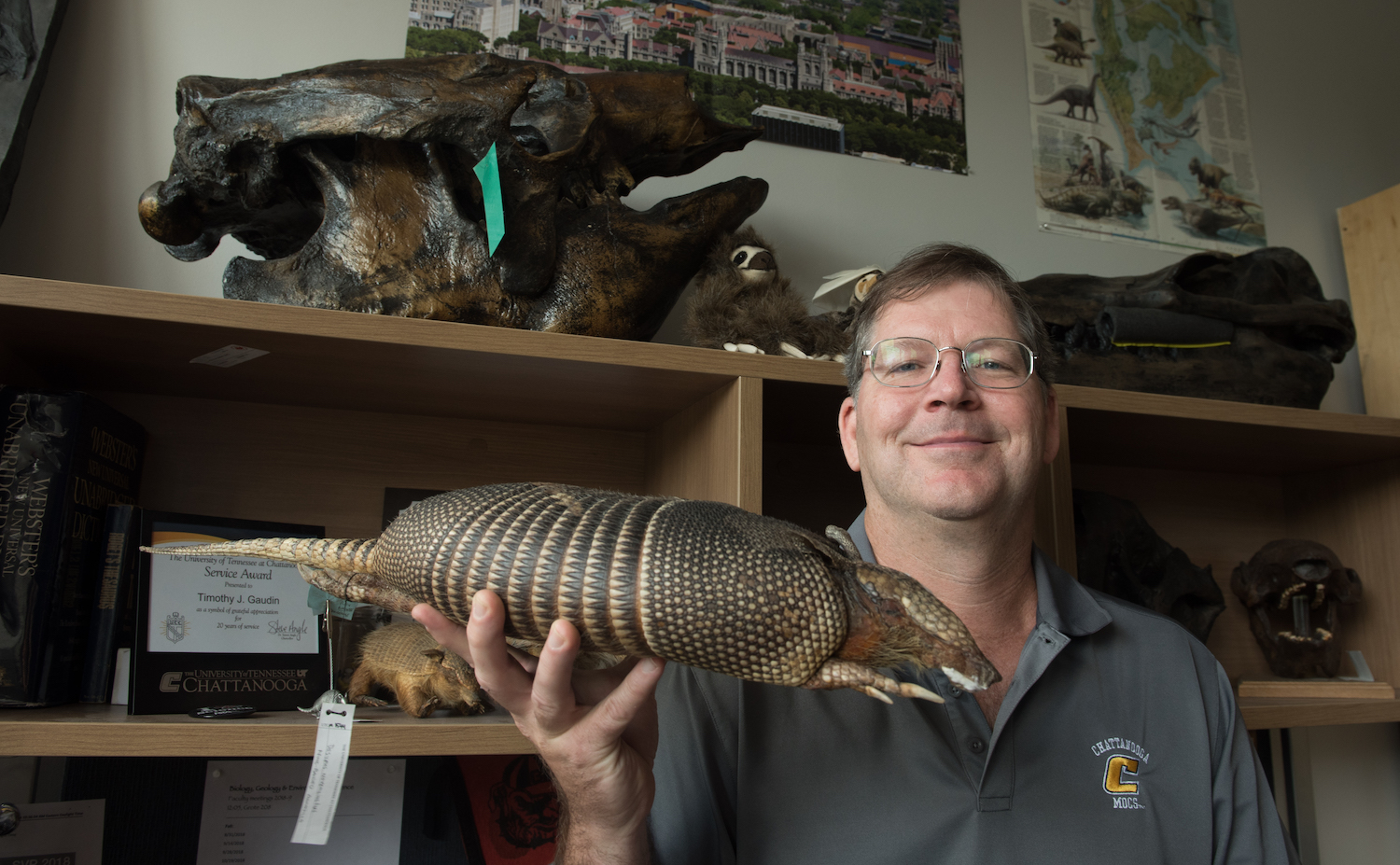 Timothy Gaudin has been researching armadillos and why they’re moving northward.

Most of us see them lying on the side of the road, flat as a concrete slab or an oddly-shaped lump.

Armadillos. Possum in the half-shell.

Although 21 species of armadillos live in South America and never leave, one kind—the nine-banded armadillo— has made it all the way to the U.S., the only one to make it so far north. “They have a huge range, from as far north as southern Illinois all the way down to the tip of Patagonia. They’re one of the most wide-ranging mammals on the planet,” says Tim Gaudin, senior associate department head in biology, geology and environmental science and an expert on armadillos, a branch of the Xenarthan group of mammals which also includes anteaters and sloths.

“They’re weird; they’re different, and I like weird,” he says, explaining his fascination with the animals.

Gaudin has studied Xenarthans for more than 25 years and, in 2011, co-authored a research paper on the increasing number of armadillos found in Southeast Tennessee. They’re here and they’re on the move. They have been seen in the forests surrounding the Great Smokey Mountains National Park and among the Appalachian Mountains in far western North Carolina, he says.

It’s not odd that they are living in moist, forested areas, he says. Despite common perceptions, armadillos aren’t desert lovers.

“They want to be near water,” Gaudin says.

Using a 1996 study of the animals’ migration patterns, he and his research partner discovered that armadillos are not only heading north and east, they’ve doubled their migratory speed—although speed is a relative term when it comes to the pokey-slow animals. While global warming may play a role in their spread, Gaudin says, he thinks other factors come into play.

“I suspect it has something to do with human habitat alterations, although it’s not exactly clear what we’re doing,” he explains. “It may be that we’re removing predators or reducing the number of competitors.”

Or it could be that we’re just better at lawn care.

“They tend to go after the best lawns, the best cared-for, which drives people crazy, but it’s

because the lawns are really well-watered and they’ve got a lot of insects in the soils, and that’s what they like.”

Once they like the taste of your garden or your lawn, they can dig basketball-size holes and it’s difficult to get rid of them, he says.

“They’re very hard to trap,” Gaudin says. “Baited wire traps don’t work because they don’t really go for baits. They’re kind of stupid, so they’ll blunder into a trap every now and then, whether it’s baited or not.”

They don’t, however, seem interested in human garbage, he says.

In a question asked by many: Why do you see them on the side or middle of the road, dead as … well … roadkill? It’s their response to being startled, Gaudin says.

“A frightened armadillo can leap straight up about two to three feet,” he explains, “so when a vehicle passes over them, they spring right into the undercarriage.”

That startle reflex also comes into play if a person tries to get too close.

“They can jump up and break your nose and knock out teeth,” Gaudin says.

Not getting too close to an armadillo is a good idea from a different medical standpoint. They are the only mammal known to carry leprosy, which destroys nerve tissue in extremities such as the fingers, toes, nose and ears and, if untreated, can destroy those extremities.

No one is exactly sure how the leprosy bacteria is transmitted from armadillo to human, Gaudin says, so it’s best just to leave the animals alone.

“Better safe than sorry,” he says.