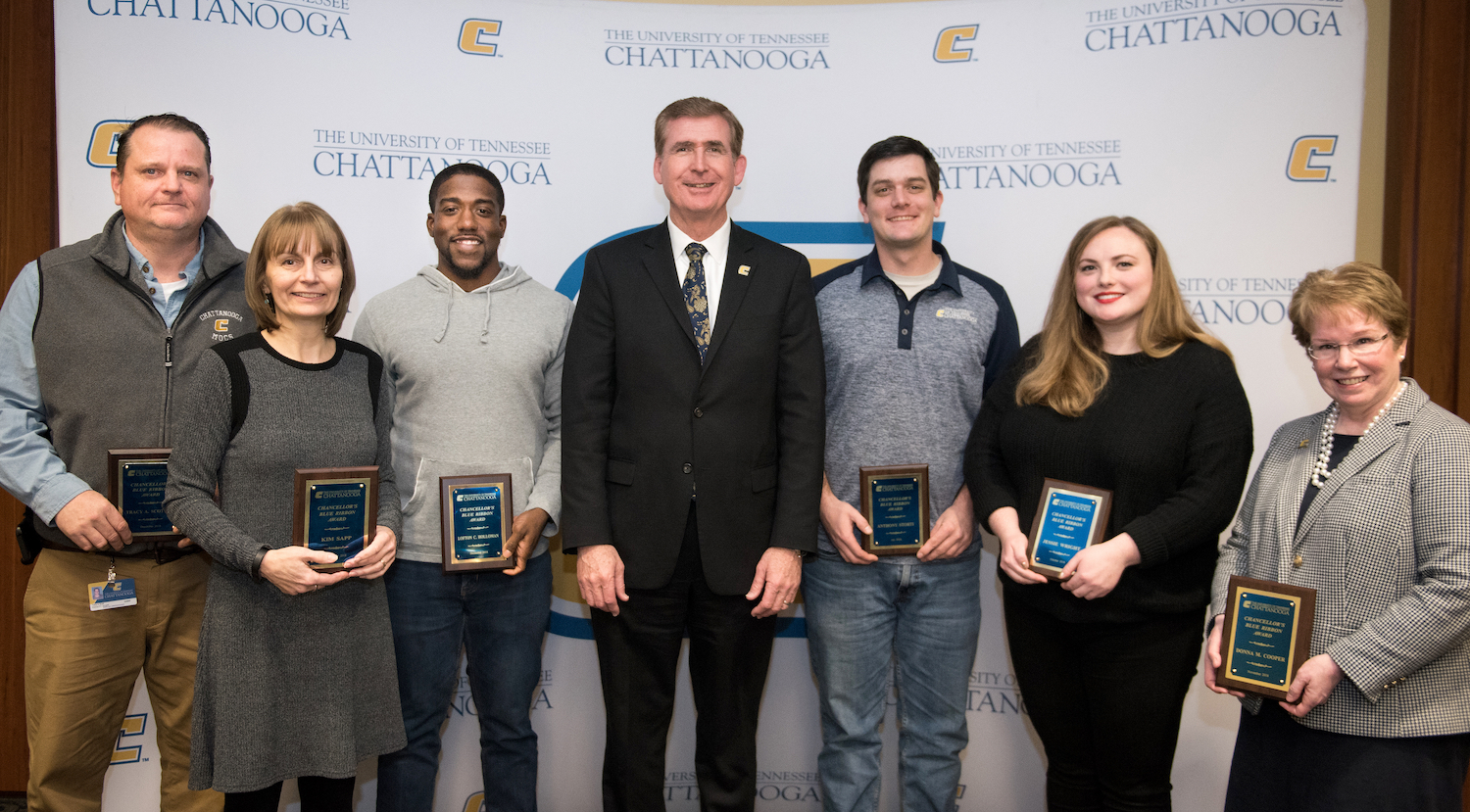 Recipients of the most recent Blue Ribbon Awards stretch across the UTC campus, from the SimCenter to McKenzie Arena, from Telecommunications to Surplus, from University Career Services to Music and Theatre.

On Tuesday, Jan. 24, the award winners from the last six months of 2018 were recognized for going above and beyond in their jobs. They were nominated by co-workers for “going the extra mile,” UTC Chancellor Steve Angle told them.

“It is about customer service and taking time, sometimes for a student who’s just distraught and doesn’t know what’s going on and you have no idea what else is going on in their life and you take that little extra minute to help them,” Angle said at a luncheon in their honor.

“People do watch. They are taking note of what happens, and you help set the bar for everybody else,” he said.

Information Technology Telecommunications Technicians Lofton Holloman and Tracy Scott were dual winners of the award in December after they spent many extra hours fixing a problem in the cable TV system in the new West Campus housing before students moved in. Hoffman, a 2014 UTC graduate, downplayed what they did, saying his and Scott’s work “was a team effort. Everything we do is a team effort.”

One of Donna Cooper’s responsibilities is parent orientation, reaching out to the families of freshman students and helping them navigate the ins and outs of university life as well as deal with any problems that crop up. “They’ve called for all kinds of reasons,” says Cooper, assistant director of University Career Services and the Blue Ribbon winner for November.

One of those phone calls came after a graduating student failed to take part in May commencement ceremonies.

“The mother said it was very important to them and to the grandparents to get to see him graduate,” said Cooper, who has worked at UTC for 23 years. “So we found out that he could indeed walk in December, and he did.”

Kim Sapp, administrative assistant at the SimCenter and the Blue Ribbon winner for September, called the award “an honor because I love my job; I love working with students.”

She helps with problems both big and small, from showing them how to fill out confusing paperwork to finding them a place to live.

“We had one that came in and didn’t even have a place to sleep,” she said. “That’s how much they want to come here.”