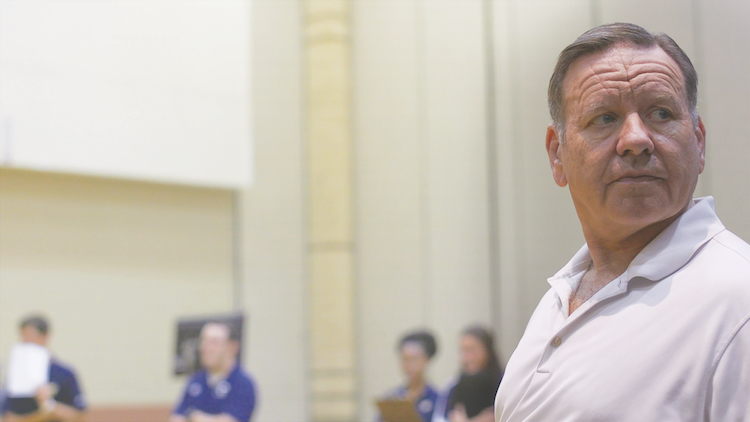 Gary Wilkerson has worked with the University of Alabama football team and athletes at the U.S. Olympic Village in Colorado Springs, Colorado, and is in the early stages of working with various arms of the U.S. military, including the ROTC unit at UTC.

“Man, this is harder than it looks.”

“This” looks like a video game. But the 18 members of the U.S. Olympic boxing team aren’t fooling around. No chips or soft drinks are on hand. This is serious stuff.

In one of the Chattanooga Convention Center’s voluminous exhibition halls, the athletes—male and female— are running through a series of visually-oriented tests to gauge how quickly their brains react when given a task that requires a near-instantaneous physical reaction as well as quick thinking.

“These issues are certainly important for athletes, but they’re equally important for anybody who does a dangerous job, like firefighters or policemen or certainly military operations’ personnel. You’re going to have to be very, very aware of what’s changing in your environment, and very often you have to make rapid decisions,” says Gary Wilkerson, a UTC professor in graduate-level athletic training and a researcher in that field for more than 25 years.

Helping athletes increase their reaction time is one goal of the testing, but Wilkerson has another, one that focuses on an injury that’s been in the national news for several years—concussions. Some of the news about concussions arises from their relationship to CTE, or chronic traumatic encephalopathy, believed to result from repeated physical blows that shake the brain. Wilkerson wants to document how brain injuries of all types, including concussions, can affect the entire body, sometimes in “very, very subtle ways,” he says.

Through testing, he is mapping out possible deficiencies in the brains of athletes, soldiers, even dancers and others who might have suffered some type of brain injury, especially ones whose effects are not instantly evident. Such injuries can have distinct effects on other parts of the body and not just obvious issues like memory or mental clarity, he says. By locating where the neurological problems are in the brain they can develop exercises to offset whatever physical problems may crop up.

“So what we’re working on is perfecting tests to identify when abnormalities are there. And then, once we’ve identified what the deficiency is, we know what to target and how to train,” Wilkerson says.

In his research, he has worked with such groups as the University of Alabama football team and athletes at the U.S. Olympic Village in Colorado Springs, Colorado. He is now in the early stages of working with various arms of the U.S. military, including the ROTC unit at UTC.

“We don’t have ‘on’ or ‘off’ seasons,” says Capt. Kevin Beavers, head of the Department of Military Science at UTC. “We train year-round to mold ourselves into the best leaders that we can be, and our training can become quite intense and injuries have occurred. We want to limit those types of  injuries that might prevent our personnel from serving as commissioned officers.

“As a leader, having the ability to make command decisions during stressful environments is paramount to our success on the battlefield,” Beavers continues.

For Olympic boxers, the goal is simple: Learn to react more quickly so you hit your opponent more than they hit you.

“We’re trying to get those milliseconds of reaction where we avoid getting hit and those that help us be able to hit,” says U.S. Olympic Boxing Coach Billy Walsh. “We’re looking for better foot reaction, better head and movement reaction, better hand-speed reaction.”

One part of the testing is to add a mental element to the tests, Wilkerson says.

“The accuracy of the responses is very much determined by the efficiency with which your brain is integrating that information,” he says.

In the boxers’ “video game” test, a white square on a field of green has two gray posts, each on opposite sides of the square, and in the middle is a smaller red circle with a figure standing directly over it. A boxer stands a couple of feet away, directly in front of the screen. When he moves, the figure on the screen moves the same way.

During the test, a line of five “arrows” pops up every few seconds (they actually look like the “less than/more than” symbols in math). The boxer must locate the direction of the center arrow—it doesn’t always point the same way as the rest—then slide that direction until he “touches” the gray pole and a “ding!” is heard.

“When we add mental workload to a requirement for rapid response,” Wilkerson says, “it accentuates deficiencies. It allows us to see people who aren’t functioning as well or not as optimally.”

Wilkerson began his career focusing mainly on knee and ankle injuries but, as time went on, he began to see wider applications.

“We started seeing more and more ankle injuries after concussions. So we said, ‘Wait a minute, there’s something about these impacts to the head that are causing injuries in the other part of the body.’

“We’ve got evidence that we can improve those deficiencies. We know what deficiencies are,” Wilkerson says. “We know they can help us tell the difference between those who have a concussion and those who don’t. It’s cutting-edge stuff.”

“Head injuries change the way your brain is processing information.”