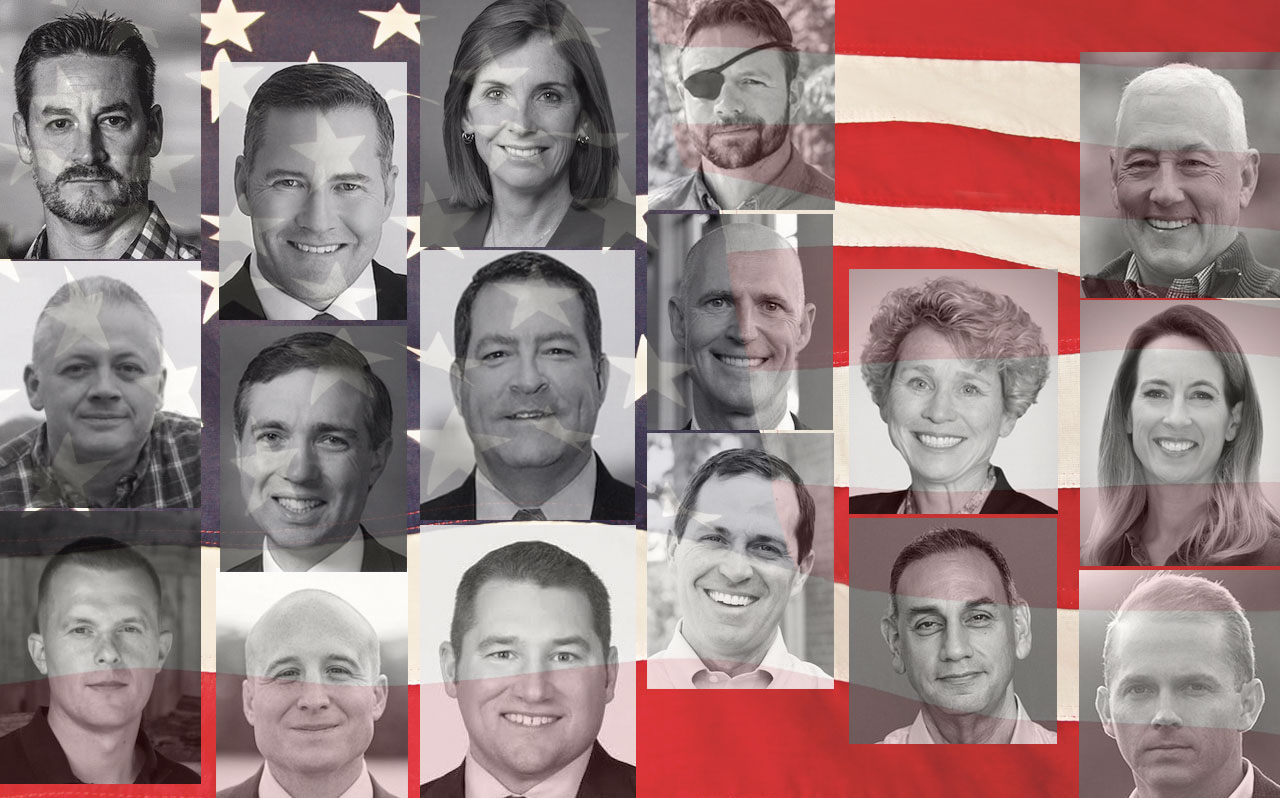 I will defend the rights of all Americans and have the courage to collaborate across the aisle and find common ground.

One was serving in Afghanistan when an IED took out his right eye and almost killed him.

One parachuted into the invasion of Iraq and later earned a Bronze Star for bravery.

One spent 20 years in the Navy boarding the ships of oil smugglers in the Arabian Gulf, operating nuclear reactors and commanding a combat-ready unit of 400 sailors.

The overall number is higher than the 14 freshmen veterans elected in 2016 and 12 in both 2014 and 2012. Seventy-seven veterans were either elected for the first time or re-elected to Congress in the 2018 midterms.

That’s a good sign, says Rye Barcott, CEO of With Honor, an organization that promotes civility and bipartisanship in politics and supports veteran candidates who agree to the same philosophy. With money from a Super PAC, the group got behind both Democrat and Republican candidates.

The percentage of veterans in Congress under 20 percent, a record low, but has been as high as 70 percent, he says.

Barcott, a veteran of the Marine Corps, uses phrases such as “principle before politics”—which is in the With Honor logo—and “put service first” to express With Honor’s philosophy. Many of the veterans who won their elections used the types of messages “that people are hungry for in the United States,” he says.

“Veterans have a formative experience in their 20s that makes them likely to put country ahead of party,” Jason Mangone, a former Marine, told Reuters News Service.

“That’s the sort of leadership we really want to see. Particularly out of these young veterans,” said Mangone, who co-authored Leaders: Myth and Reality with Gen. Stanley McChrystal and retired Navy SEAL.

The Lugar Center, a nonprofit that tracks congressional behavior, says the military’s doctrine of team first, individuals second means veterans are more likely than non-veterans to compromise and work with those across the aisle politically. The words “integrity,” “civility” and “courage” are keystones in the With Honor pledge.

Democrat Gina Ortiz Jones was in the Air Force during the term of George Bush, then was director in the Office of the U.S. Trade Representative under Barack Obama and Donald Trump. But in June 2017, she decided to run for Congress.

“As a veteran, I’ve served in other countries and know how to work as part of a unified team to complete a mission,” she told military.com. “I think that veterans know that we can’t shoot our way out of some of our problems.”

As proof of With Honor’s overarching philosophy, Dan Crenshaw, the veteran who lost an eye in Afghanistan and was elected to Congress as a Republican from Texas, was invited to appear on Saturday Night Live after his eyepatch was the butt of a joke that received wide condemnation. In the rebuttal segment, Crenshaw made fun of comedian Pete Davidson—and seemed to enjoy doing so—who made the joke and later apologized.

Crenshaw said Davidson “looks like if the meth on Breaking Bad was a person” and called him “a Troll doll with a tapeworm.” But Crenshaw finished the segment with a message of civility and compromise.

“But seriously,” he said, “there’s a lot of lessons to learn here, not just that the left and right can still agree on some things, but also this: Americans can forgive one another. We can remember what brings us together as a country and still see the good in each other.”