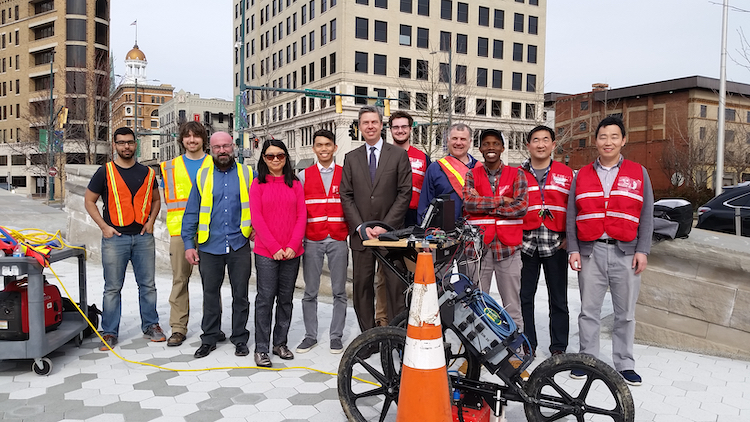 Chattanooga Mayor Andy Berke, center, learned more about research being conducted in a collaboration between UTC and the University of Vermont. 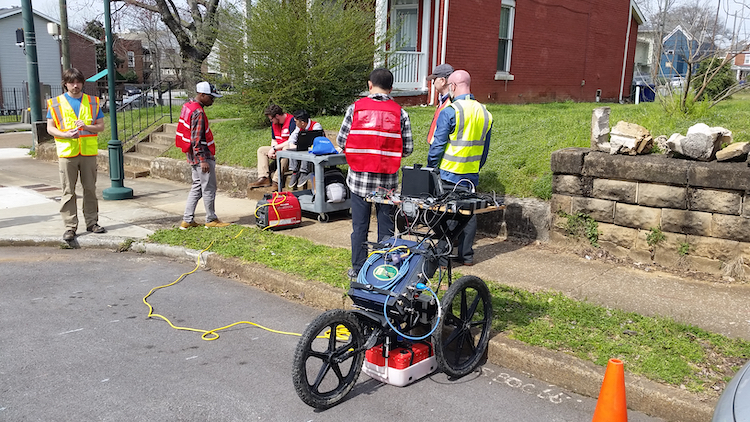 A team from UTC uses radar and other equipment to search for underground infrastructure such as water and sewer pipes and electrical conduits.

With local participants organized through Chattanooga’s Enterprise Center, Wu and Yang are collaborating with the University of Vermont to use equipment such as radar and magnetic sensors to search underground and document the location and condition of water and sewer pipes, electrical conduits and other infrastructure. The data is fed into high-speed computers at UTC’s SimCenter and turned it into spreadsheets, graphics and other easy-to-use documents.

Berke later tweeted: “The @ChattanoogaID is where new ideas are tested in partnership, like these University of Vermont and @UTChattanooga researchers experimenting in Miller Park pic.twitter.com/pcPuEzeCdq.”

Documentation for underground infrastructure can be out of date or inaccurate, depending on the city, so data gathered by the sensing project can be used by city engineers, planners and maintenance supervisors, as well as construction companies, to locate pipes, conduits and other utilities before digging begins, reducing the danger of damaging critical equipment.

In 2018, Wu and Yang picked up an award for the research project, which was selected as one of the 50 best in the country by Smart Cities Connect Media and Research, a national network focused on Smart Cities projects, which are designed to make urban areas more efficient and safer. Using EPB’s 10-gig fiber-optic network, the fastest in America, Chattanooga is one of the pioneers of the Smart Cities concept.