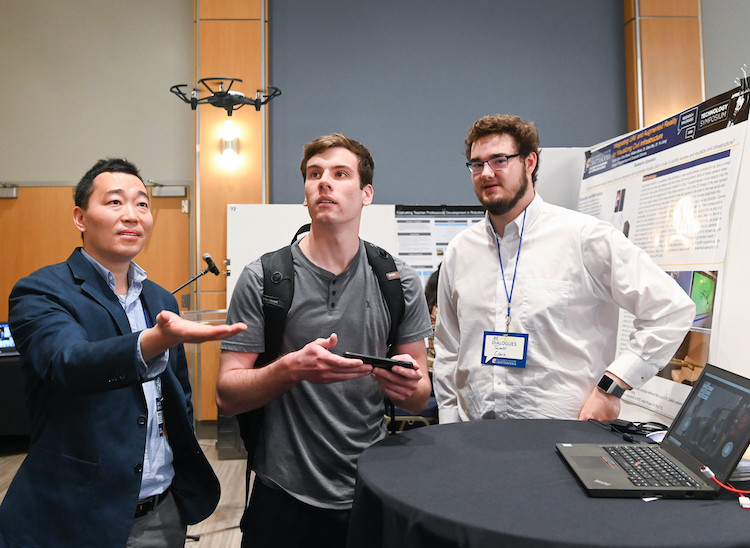 Flying drones were among the sights at the first day of ReSEARCH Dialogues in the University Center.

To see more photos of ReSEARCH Dialogues, go to: https://bit.ly/2IrNzek

The Gatlinburg fires of 2016 burned away Scott Thomas’ three-bedroom house, killed his pets, even lost him custody of his young daughter. With no insurance, he had to buy a small camper, which he parked in his driveway and still lives in.

He told all of that to Jacquelyn Scott, a senior in English at UTC, who took Thomas’ horrifying story, combined it with the frightening memories of five others who lived through the Gatlinburg fires and presented them at this year’s ReSEARCH Dialogues.

Despite suffering individual losses during the fires, the people she interviewed expressed a common emotion, she said.

“I heard the same kind of thing, that everyone feels kind of abandoned now because it’s after the fact,” Scott said.  “It’s three years later but these folks are still going through stuff.”

Scott Thomas’ daughter, for instance, no longer lives with him because “her cat was killed in the fire and she blames him,” UTC’s Scott said.

Scott, whose presentation was named “Into the Fire: Personal Accounts of the 2016 Gatlinburg Fire,” was one of more than two dozen students making poster presentations on Tuesday, April 9, as part of the annual ReSEARCH Dialogues. With more than 50 campus departments and offices represented, undergraduates, graduates and faculty attend the event, presenting their research papers and proposals on posters, as part of panel discussions and in live presentations.

It’s not easy being the girlfriend of a superhero who is faster than a speeding bullet! More powerful than a locomotive! Able to leap tall buildings in a single bound!

But that’s the case with Lois Lane, girlfriend of Superman. It’s a lot of pressure. But it’s worse if Superman doesn’t take Lois seriously because she’s a woman. So was that the case? Was Superman patronizing or supportive of Lois Lane?

Not really, according to Hannah Boulware and Braden Sanford, who put together the project “Superman Isn’t So Super: A Critical Look at the Treatment of Women as Portrayed through Lois Lane.” Both are seniors in psychology who read 16 comics from the 1960s series: Superman’s Girlfriend: Lois Lane, and pulled out specific statements to judge how Superman treated Lois.

Considering the era in which the comics were produced, they figured the Man of Steel would be misogynistic and condescending. They were shocked to find that he wasn’t, although he wasn’t a full-fledged feminist, either. He showed more of a “benevolent sexism,” they say.

While Superman was patronizing about 12 percent of the time—“Good luck, Lois … but in the books I’ve read, it’s never the ‘Maiden Fair’ who storms the castle!”, he was “informative” in about 29 percent of his statements—“Just dive into the open end and the nucleonic circuits will reduce your bodies to microscopic size and transport you into the bottle!”

About 23 percent of the time, he was “agreeable” — “Great, Lois, Now heave that rock into space… Then we’ll start planning our WEDDING!”

“I think we expected to see a lot more misogynistic and aggressive language,” Sanford said.

But he also was “aggressive” about 13 percent of the time—“Admit it, Lois you were always JEALOUS of Lana Lang because she was my childhood sweetheart when I was SUPERBOY!”

Admitting that she is a comic-book nerd herself, she said it was interesting to see how Superman was usually a pretty good boyfriend most of the time.

“He’s actually good. He’s trying to what’s better for her,” she said.

Having a big, cuddly dog is never a bad idea when you’re trying to get people’s attention. But Morgan Royer brought golden retriever Reese to ReSEARCH Dialogues for a bigger reason.

He was part of her study to see whether people going into surgery would be less anxious if they had time to pet a dog beforehand.

Answer: Not so much.

For the study “The Effects of Therapy Dogs on Preoperative Anxiety,” Royer tested different patients with different scenarios. Some saw Reese before surgery; others were given a stuffed dog that was the same size and color as Reese; still others met with a person while some didn’t see anyone at all, dog or human.

Royer, a senior in psychology who starts medical school in July, found that patients who saw the stuffed dog had lower heart rates and blood pressure before going into surgery than ones who saw Reese, a person or nothing at all.

“Our hypothesis right now—although this hasn’t been tested or proven— is just a hypothesis, but with there not being extra energy the room, there were no expectations. With the stuffed dog they were able to just hold it and be there. Maybe just having the tactile and not the other dog’s energy, maybe that had an effect.”

She says this is the first time a study has been done using a stuffed animal in therapy work, so “hopefully other people will follow up on our work.”

As for Reese, he didn’t seem to especially anxious as person after person petted him while he sat at Royer’s feet during ReSEARCH Dialogues.

To say Nathan Collyer is enthusiastic about his research project is like saying a hurricane is a wind. It just doesn’t do justice to the energy level.

Although he’s a senior in criminal justice, he’s presenting “The Geography of Chattanooga: Engaging Community with Place Using Story Maps,” a project he put together with geology majors Katie Spivey and Caleb Mathias. In it, they have designed a website that breaks down the geography, geology, biology, history and other elements of historical sites in Chattanooga.

“We want to take education out of the classroom and bring it to the public,” Collyer says.

At this point, they’re focusing on Stringer’s Ridge, Cameron Hill and the Old Stone Church at the intersection of McCallie and Georgia Avenues. At each they plan to install a sign with a QR reader or a weblink that will lead to an interactive website.

On the site are icons that can be touched to produce drop-down boxes that will, for instance, explain the types of native and invasive plant species you can find in the 92-acre Stringer’s Ridge Park. Other boxes will explain the ridge’s importance in the Civil War and how that ties into Cameron Hill. Facts about Native American history in the area is on the website as well as such topics as the geology of the Chattanooga area.

“So if you say, ‘I don’t care about rocks; I want to learn about the history,’ you can,” Collyer said. “The dropdown boxes will keep you interested.”

The ultimate goal is for the website to have links that cover all the historical and important sites in Chattanooga such as the Walnut Street Bridge and Lookout Mountain, he says. 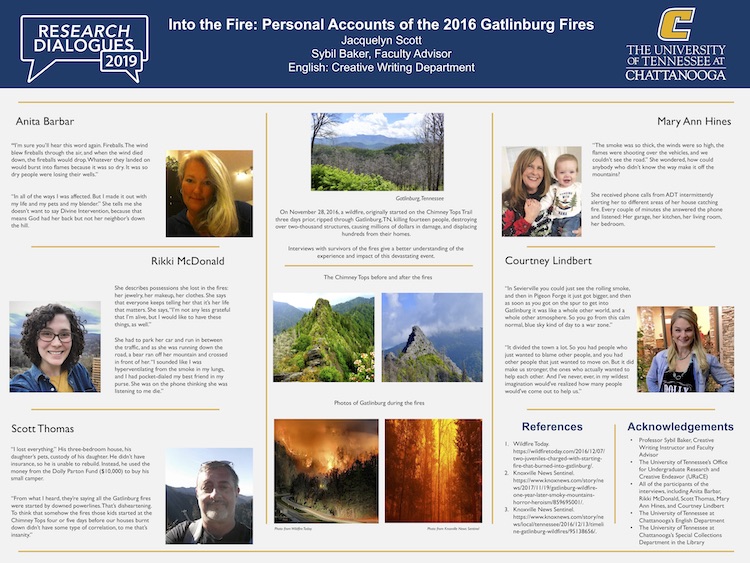 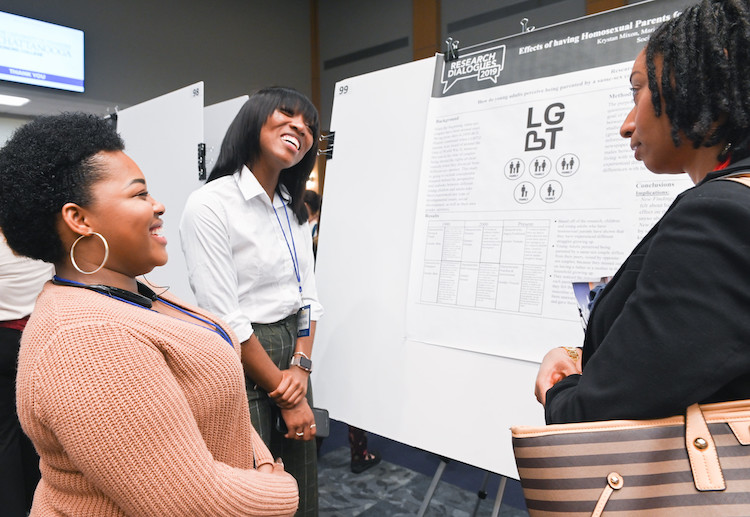 Marie Ray, left, and Krystan Mixon researched the effects that gay parents may have on their children. 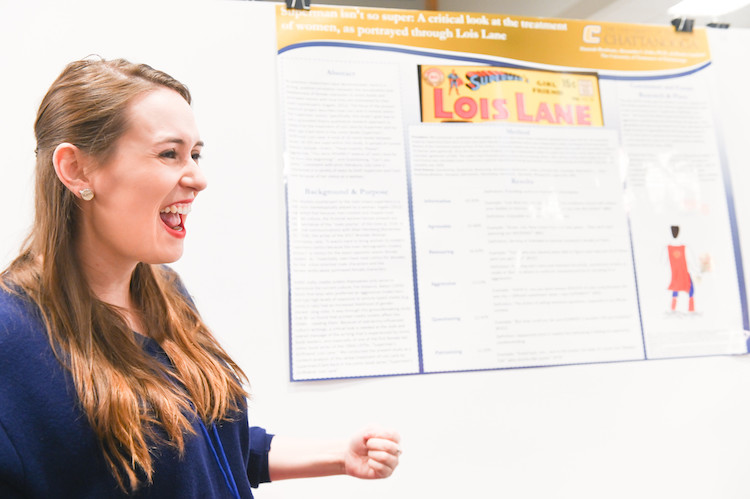 Hannah Boulware and her partner, Braden Sanford, decided that Superman wasn’t misogynistic when he dealt with Lois Lane but displayed more ‘benevolent sexism.’ 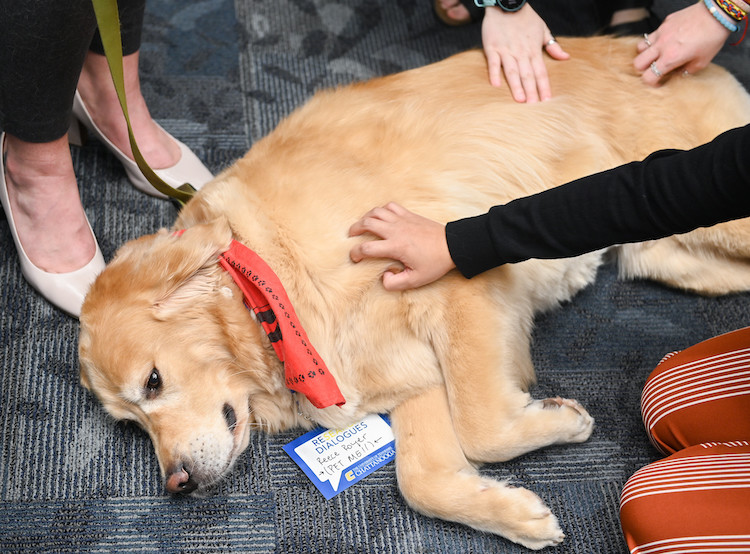 Reese the therapy dog got a lot of attention at the poster presentation for “The Effects of Therapy Dogs on Preoperative Anxiety.’