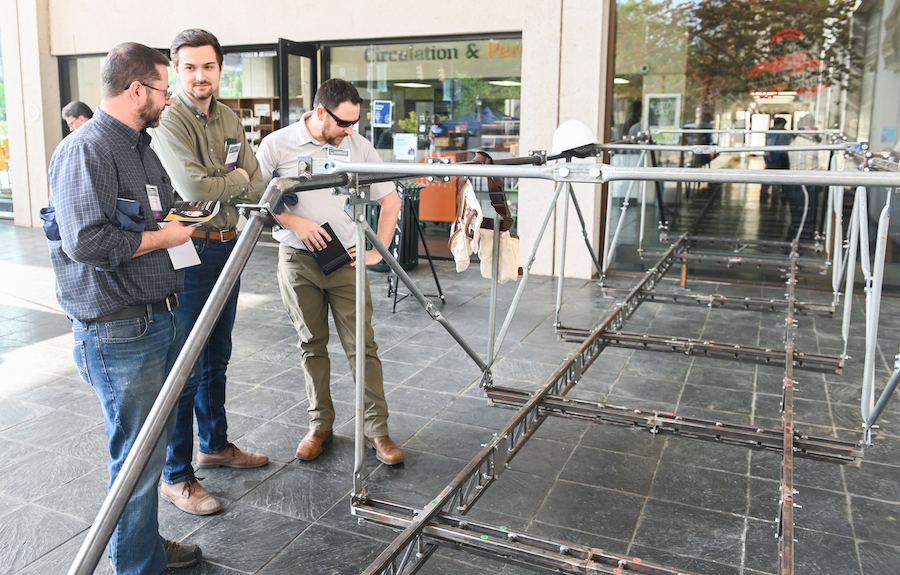 UTC students Charles Anderson and James Beal faced those efficiency bottlenecks when officials from the Children’s Hospital at Erlanger Kennedy Outpatient Center approached them. The hospital needed the seniors in engineering management to generate ideas on how to streamline its surgery process.

“Essentially getting patients in and out,” said Anderson.

So they did, finding methods that not only increased the efficiency of the entire surgical process—from waiting room to operating room to recovery room to discharge from hospital—but also could increase the center’s revenues by 20 to 25 percent.

At the Tech Symposium held Thursday, April 18, in the Chattanooga Public Library downtown, Anderson and Beal explained how they did it with “Erlanger Children’s Surgical Throughput Analysis,” one of the 130 projects on display at the event, all put together by UTC engineering and computer science students from freshmen to graduate students.

Students from several Hamilton County high schools attended the event, and companies from across the Chattanooga area came to hear about the projects and also—hopefully—find future employees.

“It’s an opportunity to showcase their work to these companies who might, in the future, be their employers. It’s a way of showing your capabilities to potential employers,” said Daniel Pack, dean of the College of Engineering and Computer Science.

In addition, the symposium gives the students a chance to hone their communication skills, he said.

“You have to learn to communicate as an engineer, as a scientist, to the general public; some with expertise in different engineering and maybe some who have nothing to do the technical field at all.”

Held for the first time in the UTC University Center’s Tennessee Room last year, moving the symposium to the library also is a way of getting UTC off campus and into the community at large, “making it a community event rather than a UTC event,” Pack said. “It’s our effort to be more engaged with the community.”

Projects on display ran the gamut. Some were as easily understood as designing a microbrewery or making a doghouse that automatically provides food, water and temperature control.

Others were more complex-sounding such as “Microgrids Energy Management Using Robust Convex Programming.” Despite the super-scientific title, it is actually just developing mathematical formulas to help renewable energy systems such as solar-power arrays or windmills keep up with fluctuating energy demands from the public and save money at the same time.

One of the more “out there” projects was “Feasibility & Potential Approach to Mining Near-Earth Asteroids” (“Near-Earth” is a relative term, say 10 million miles or so.) Partners Dillon Grider and Kenneth Pruett believe you can send technology-carrying satellites to an asteroid and use photography, radar and other technology to see what minerals may be in the asteroid’s rocky surface and core.

Such wide-ranging ideas and engineering projects are one of the reasons that Candace Brown, talent acquisition consultant with TVA’s Nuclear Division, comes to events like the Tech Symposium. She’s able to get a look at mechanical, chemical and electrical engineering students, among others, who may be future employees at TVA, she said.

“We do hire people straight out of college,” she said. “But we also hire college recruits, and what we mean by college recruits is people who have already graduated within the last 48 months or less. We do hire them.” 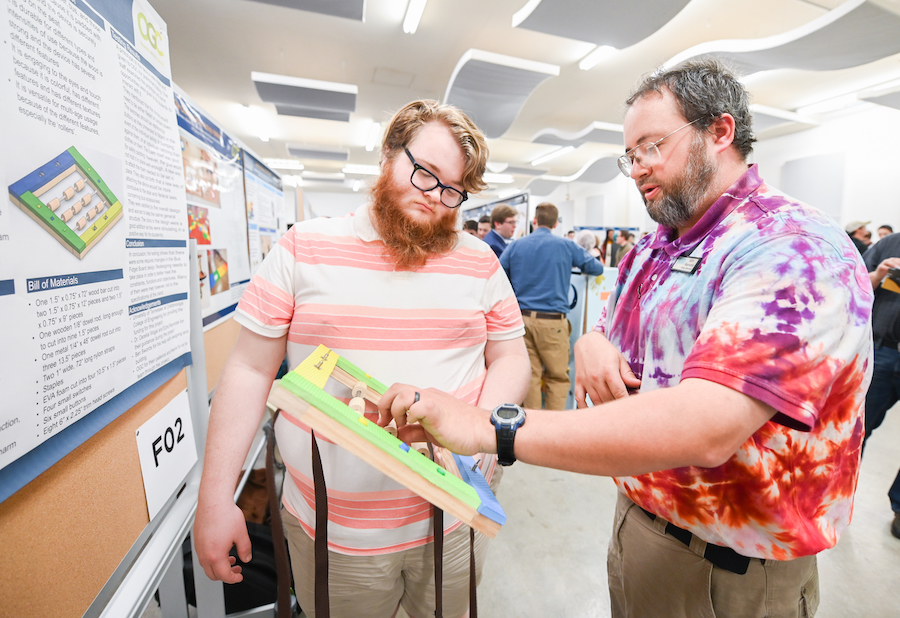 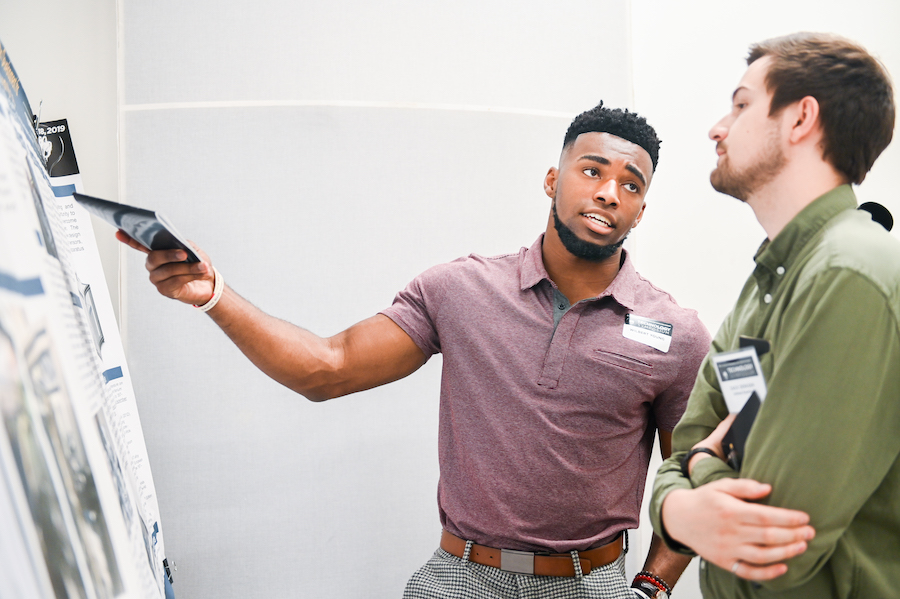 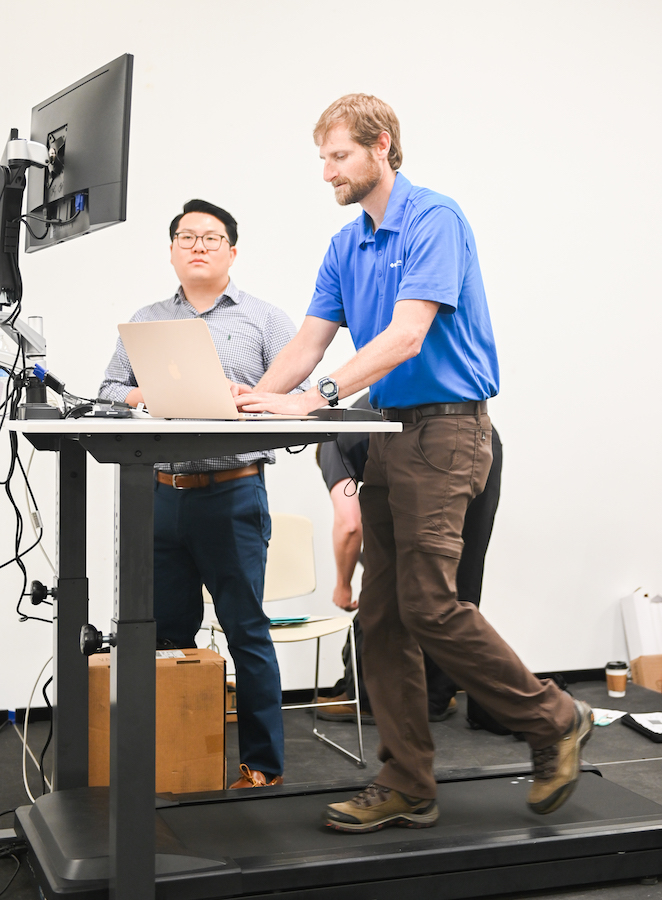 “Testing the Adaptability of Treadmill Desks” is the work of Brian Beck, Jacody Floyd and Alexandria Snider. 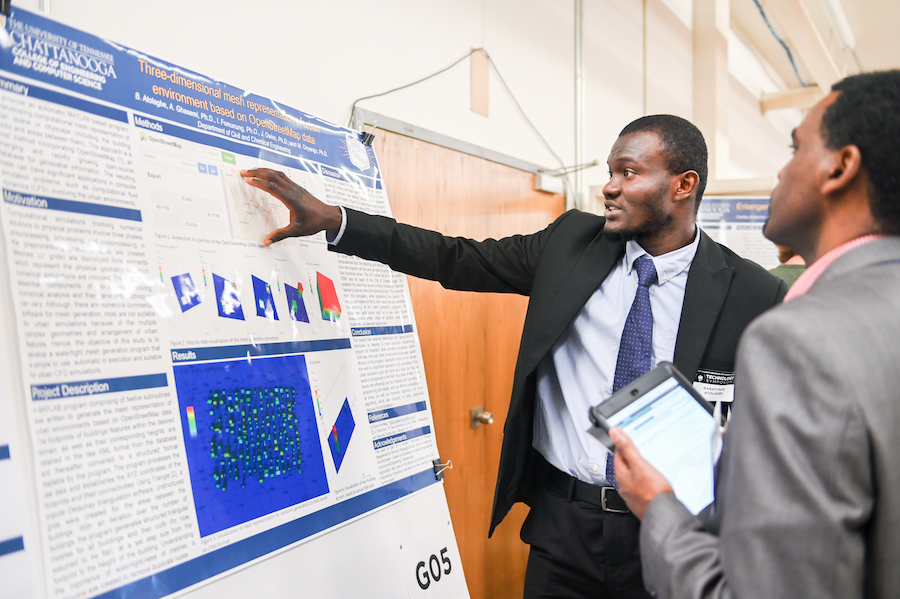 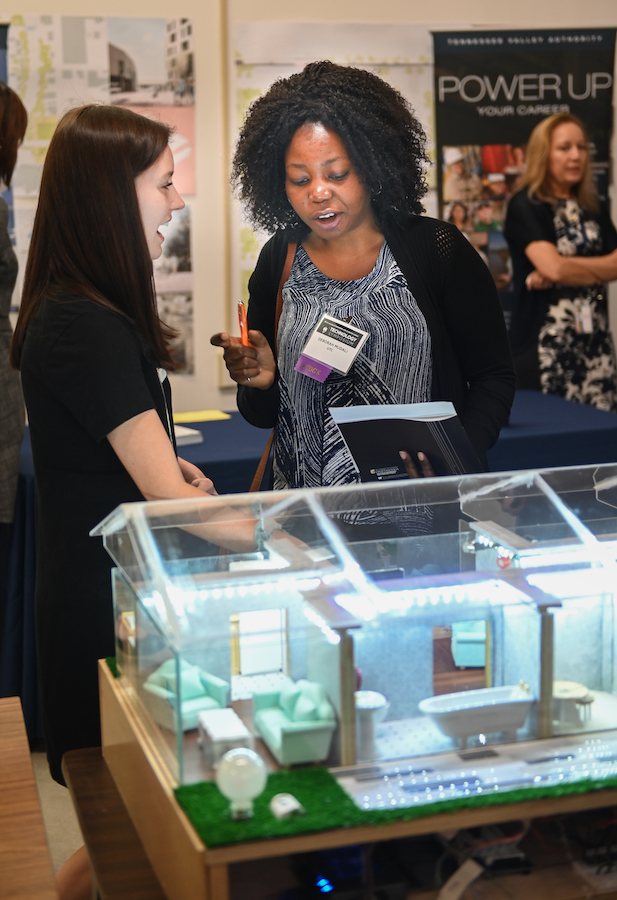 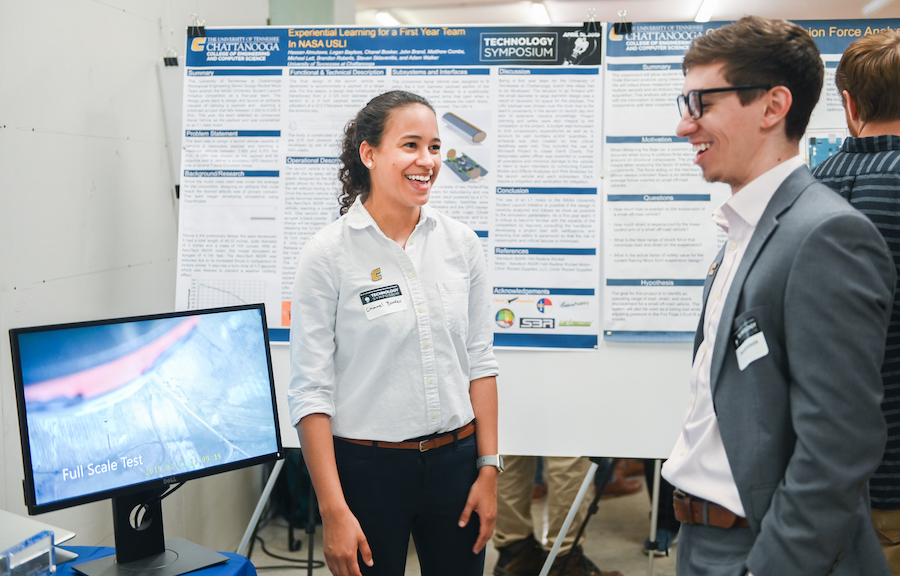 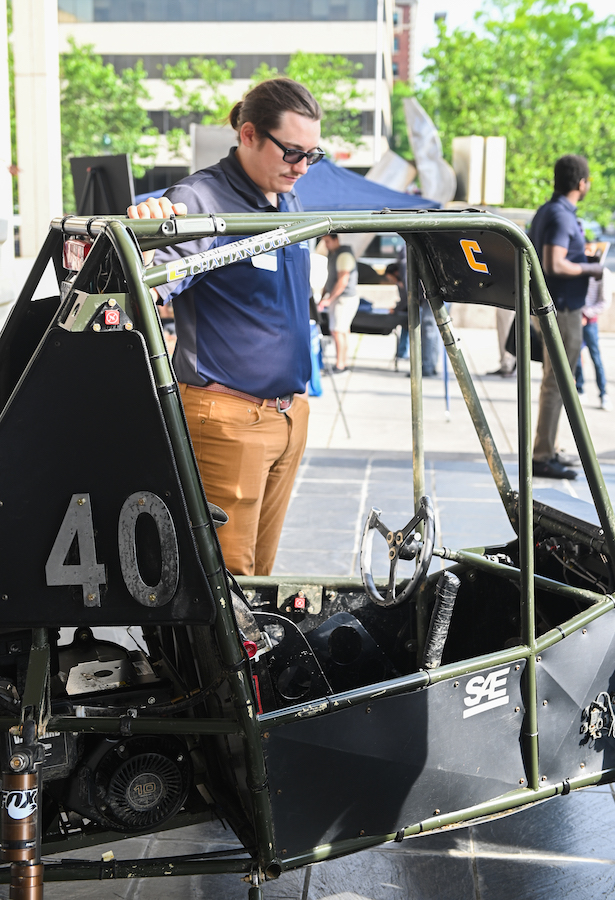 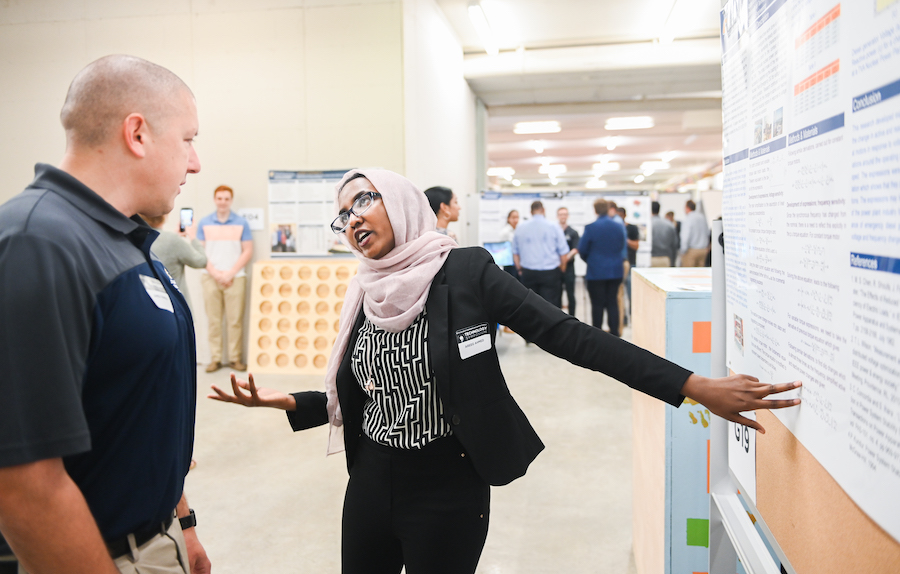 Areeg Ahmed was part of three projects that focused on voltage experimentation. 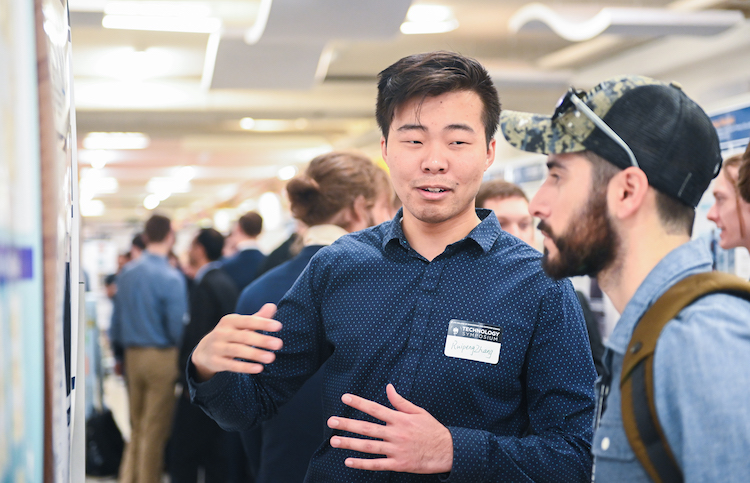 Rhuipeng Zhang was part of two projects: “Network Intrusion Detection System as a Service on OpenStack Cloud” and “GRRAndroid: Remote Live Forensics for Android at Scale.” 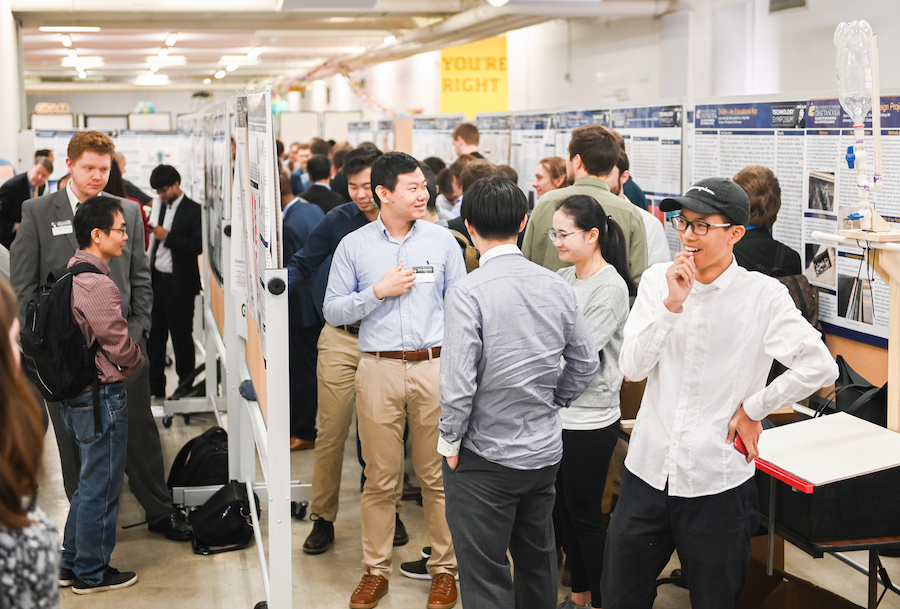 The fourth floor of the Chattanooga Public Library was packed with 130 projects by UTC students. 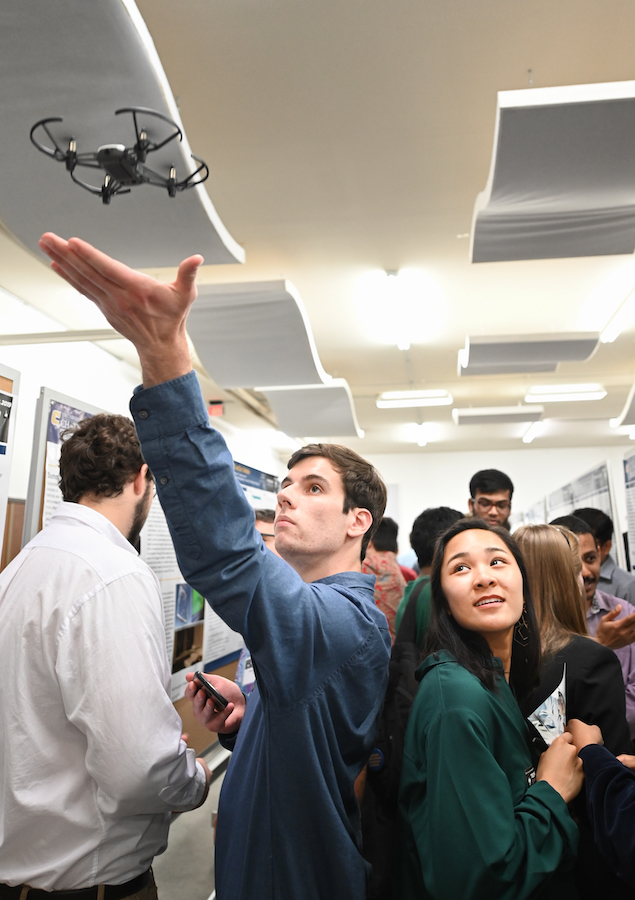 Drones were used in several projects. 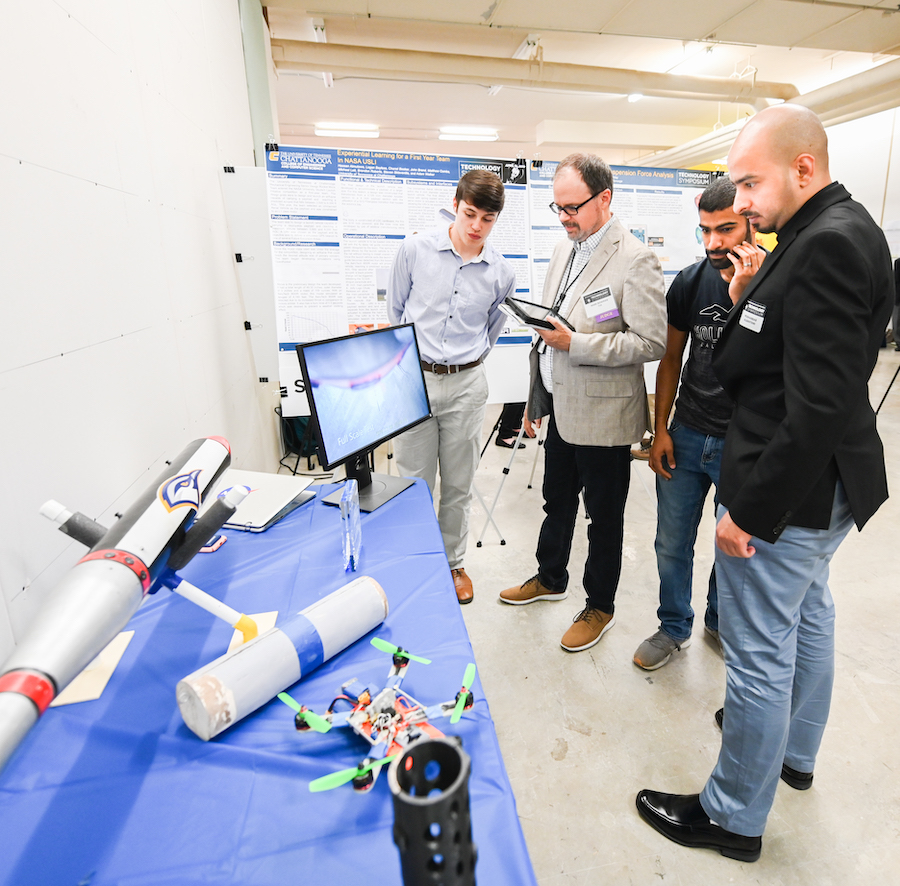 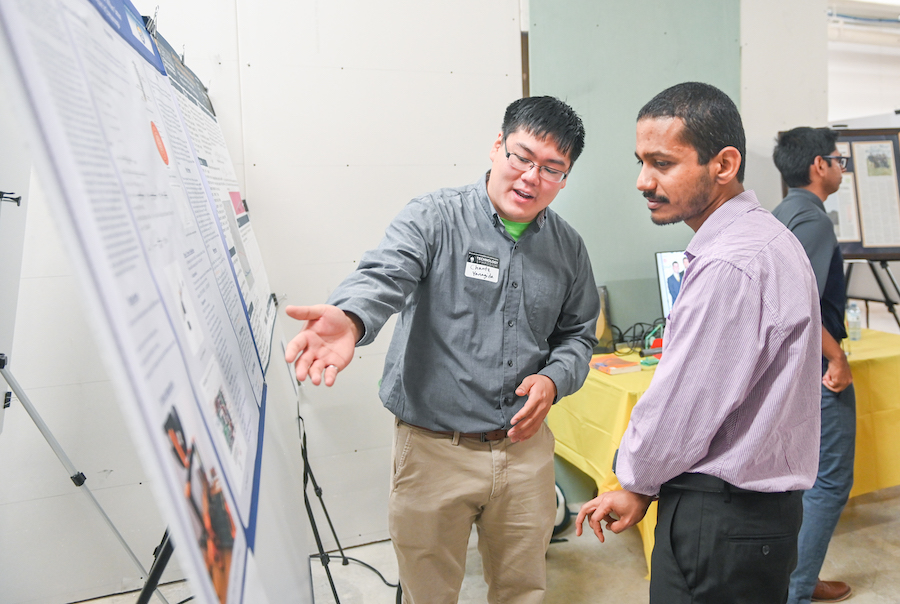 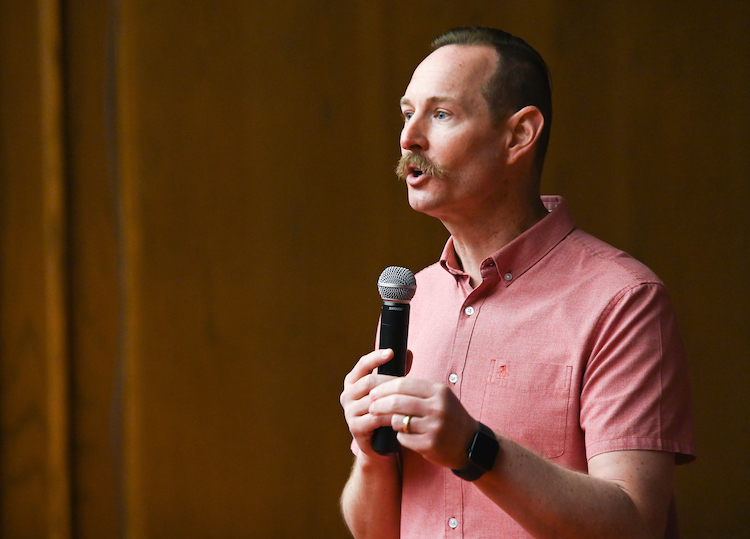