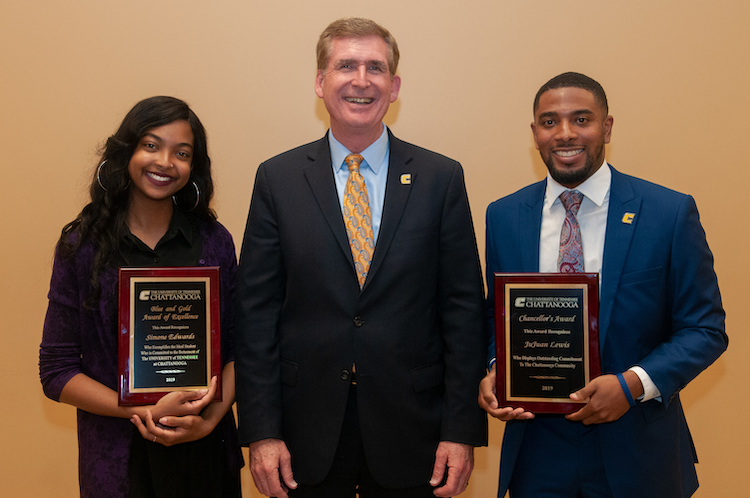 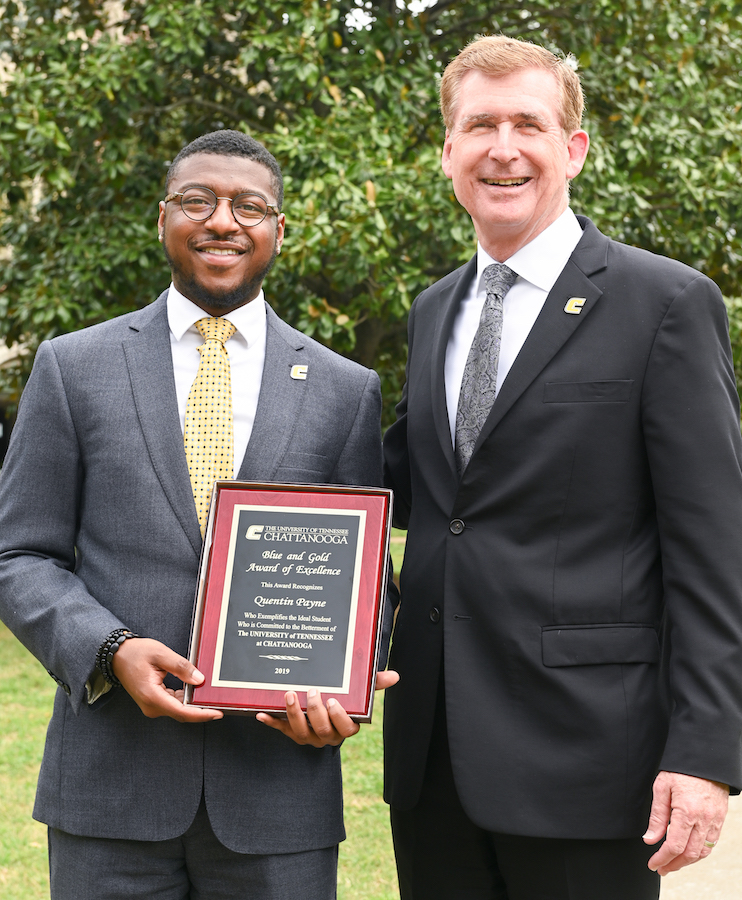 Quentin Payne, left, was given the Chancellor’s Award.

Capping already distinguished collegiate careers at the University of Tennessee at Chattanooga, three student leaders set to graduate in May will take with them some of UTC’s most prestigious honors for student service and achievement.

The Blue Award is traditionally presented to a male student, while the Gold Award is presented to a female student, and both recognize exemplary service as student leaders, academic excellence, involvement and service and dedication to the university. The awards are given by the chancellor and the executive leadership team.

The Chancellor’s Award is presented to a single student for exceptional leadership, service to and dedication to the university and academic excellence.

Edwards is a political science major who also is a member of Delta Sigma Theta sorority, has served as a campus housing resident advisor, external communications director of the Black Student Association and who has volunteered with area nonprofit associations, also recently was named a Fulbright Scholar.

Among his numerous leadership positions as a UTC student, Lewis has served as chairman of the Chancellor’s Student Advisory Board, as the student member of the UTC Campus Advisory Board affiliated with the statewide UT System Board of Trustees. He also organized a roundtable discussion workshop for regional SGA members that brought student leadership from nine universities to the UTC campus to consider issues of importance to regional college students.

Payne, a civil engineering major who was unable to accept his award in person because of job obligations, has a resume that includes service in the NAACP, the National Society of Black Engineers and the American Society of Civil Engineers.

“We thank all the students here tonight for being so engaged and involved in the life of your university,” Angle said. “All of you have made UTC better than it was before you came. You’ve done an incredible job, and the unselfish attitudes you have toward serving your campus community and your willingness to give back are truly remarkable and make us very proud that you chose to pursue your college education at UTC.

“I have enjoyed getting to know you, and I appreciate what you have done for this university and for me. You are what makes the Mocs family special.”

More than two dozen awards were presented to other students for service and leadership in student government and other campus organizations, and Billy Weeks, who teaches photojournalism and serves as faculty adviser to campus newspaper, The Echo, was presented the SGA Professor of the Year Award.

UTC alumna Kim White delivered the event’s keynote speech. White, whose distinguished career includes her current job as president of Chattanooga’s River City Co., credited UTC with “life-changing opportunities” that she seized and has since sought to “pay forward.”

“I was the first person in my immediate family to go to college, and I didn’t grow up on a mountain or attend private schools before I got here,” White said. “But I took advantage of every opportunity I got here, and there were many.

“Take advantage of all the opportunities you are positioned to have, and develop your leadership skills by getting involved wherever you can. Leadership is what made this city’s renaissance happen, and you know where that leadership came from? It came from a lot of people like you and me, who rolled up their sleeves when the time came and did the work that had to be done. One person really can make a difference, and all of you in this room have shown that you are willing to be that one.”