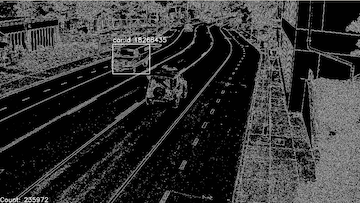 This is the real-time image that anyone can view on the website for the MLK Smart Corridor project. Privacy issues aren’t a problem because of its low-resolution and fuzziness. Other images on the web page only show flow patterns of vehicles.

You might not know it by looking at it, but M.L. King Boulevard is a big sandbox.

No kids are playing in it, just some adults from UTC. But “playing” isn’t the right word; they’re involved in research that may improve the way cities around the world operate.

Since January, as part of the ongoing Chattanooga Smart Community Collaborative being conducted through UTC’s Center for Urban Informatics and Progress (CUIP), a series of cameras have been identifying and documenting the number of cars, trucks, bicycles, pedestrians—even dogs— that pass through eight intersections along M.L. King from Georgia Avenue to Central Avenue. Along the 1.25-mile stretch, each intersection in the project has poles with three cameras each to visually cover the entire intersection.

“This is our sandbox. This is our sandbox for our Smart City projects,” Mina Sartipi, director of CUIP, told a group of local officials on Thursday, April 25, during a demonstration to explain the multiple goals of the project, known as the ML King Smart Corridor.

Those goals include assessing traffic to see if steps can be taken to make it flow more smoothly, including synchronizing traffic lights. It’s examining pedestrian safety and where it can be improved—and where jaywalkers are crossing, too. It’s testing air quality and has audio sensors to record sound levels.

From a privacy standpoint, no video is stored; you can watch the video feed on the web, but it’s a black-and-white image that essentially shows only outlines and nothing with any clarity.

Researchers aren’t interested in the who, they want to know the what.

The raw data obtained includes what the object is that passes in front of the camera, how many vehicles and pedestrians use each intersection; what time of day is traffic the heaviest.  Vehicles show up as orange dots, pedestrians are green … and jaywalkers are purple.

“We need to make the MLK corridor an urban testbed so people know that if you want to figure out that next great idea, that solved problem for people in our country and around the world, Chattanooga is the place that you can do it,” said Mayor Andy Berke. “We’re a city of creators and for us to really thrive we want to be a place where new ideas are born, where things are invented.”

The ML King Smart Corridor is part of Chattanooga’s larger Smart City effort which includes, among other goals, designing transportation systems—both public and private—that are more efficient and safer, finding new and better methods for energy delivery and usage to the area and improving health care for the region.

Along with the university, the Chattanooga Smart Community Collaborative includes EPB, Erlanger Hospital, the city and Hamilton County governments and such groups as Co.Lab and the Enterprise Center. The goal is for each of the partners to bring its own expertise to the mix and, in doing so, continue Chattanooga’s role as a leader in technology research.

UTC Chancellor Steve Angle said the ML King project is an example of the collaborative nature of Chattanooga that defines it as progressive city with an eye on the future.

“What Chattanooga is about, I think, is working together,” he said. “Can you imagine the students who are involved in this project, who are really helping to define what is the future will be?”

One of those students is Jose Stovall, who is pursuing a graduate degree in data science. He has been involved in designing the inner workings of the ML King projects, which includes writing computer code. His pride in the system is evident when he talks about it.

“I’ve had a least at least 40 days where I’ve been working on this at home, remotely, until two or three in the morning,” he said.

“I had a great time. It’s powerful and an awesome process.”