Mom and son both picked up diplomas on the same day 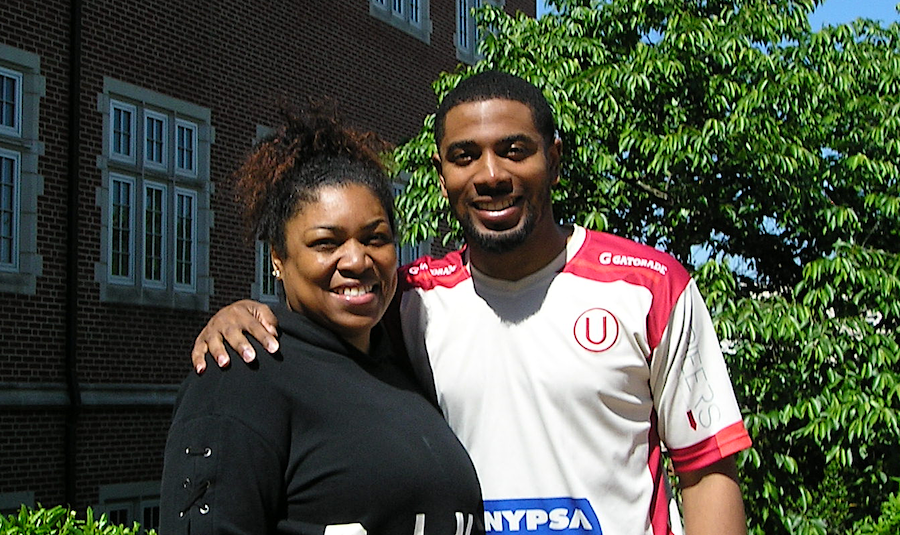 On May 4,  Jujuan Lewis received his bachelor’s degree in finance and economics from UTC.

The same day, his mom, Latarsha Lewis, recieved her associate’s degree in science with a major in dental hygiene from Chattanooga State Community College.

She was at the 1 p.m. commencement ceremonies in McKenzie Arena to watch him walk across stage and accept his diploma. He couldn’t make her 10 a.m. graduation at Chatt State, but that’s because, as Student Government Association president at UTC, he was giving introductory remarks at both the 9 a.m. and 1 p.m. ceremonies.

There’s a double dose of pride as mother and son sit together at a table. Both are proud of what they’ve accomplished personally, but they’re also celebrating the accomplishments of the other.

“It’s pretty amazing,” says Jujuan, “Seeing my mom as a young parent, you see her take the backseat to her kids. She put her dreams and goals on hold.

“Everything you’ve done until now has been for somebody else,” he says directly to her. “Now you get to celebrate and actually take those accomplishments in your hand and do something you want to do and do something that you love.”

As you would expect any mom to do, Latarsha gets misty-eyed as her son speaks.

“I love you with all my heart and I’m so proud that you’ve become the man I knew you would become,” Latarsha tells him. “You put God first and kept working at it. You have accomplished all of that.”

In some ways, it’s kind of amazing that Jujuan is graduating. Not because he’s a bad student; in fact, it’s the opposite. He has dived headfirst into the full range of experiences that UTC has to offer. It sometimes seems like his name is on the membership roles of every committee on campus.

Along with being SGA president, he has served on Chancellor’s Multicultural Advisory Committee and Roundtable. He was on the search committee for UTC’s new provost. He was community service chairman for Kappa Alpha Psi’s Lambda Iota chapter.

“I took some night classes,” he says with a verbal shrug. “That gave me the whole day free and gave me the chance to handle those tasks.”

In the past, he has said that, when he first arrived at UTC, he had a hard time feeling like he fit in. Now, though, he’s comfortable in his multiple roles.

“I feel like he has grown tremendously,” Latarsha says. “He’s shifted from young adult to manhood. I could see the growth.”

Her education is not at an end. After 15 years as a dental assistant, she plans to start attending classes at Chatt State in February to earn a degree as a dental hygienist.

“It’s just because I’ve been there so long. I want to feel accomplished,” she says with a huge laugh.

Laughter punctuates a lot of her conversation while Jujuan is more reserved, frequently saying “Yes, sir” when he answers questions. But his mom says that, since he came to UTC: “He has lost his shyness.”

While his mom continues her studies, Jujuan wants to head directly into his career. Two Nashville firms have expressed a certain amount of interest in hiring him and—fingers crossed—hopes to hear from them before graduation on Saturday.

“I’ll go wherever I get an opportunity that’s the best cultural fit or the best fit for me,” he says.

He wants to travel both around the country and internationally, having received a taste of what’s out there in the world in December when he took a study abroad trip to Peru. On this particular day, he’s wearing a soccer uniform he bought in Peru. What team is it? “I have no idea,” he says with a grin.

After graduating from McCallie School, where he played football, Jujuan enrolled in Stetson University in Florida. He spent a year there before coming back to Chattanooga and enrolled at UTC. Before he left for Stetson, Latarsha wanted to make sure he took some thoughts with him.

“Be the foundation of our family,” he tells her. “Be proud of it. I always felt like you were the head of the household. I’m very proud of you and very lucky to have you.”