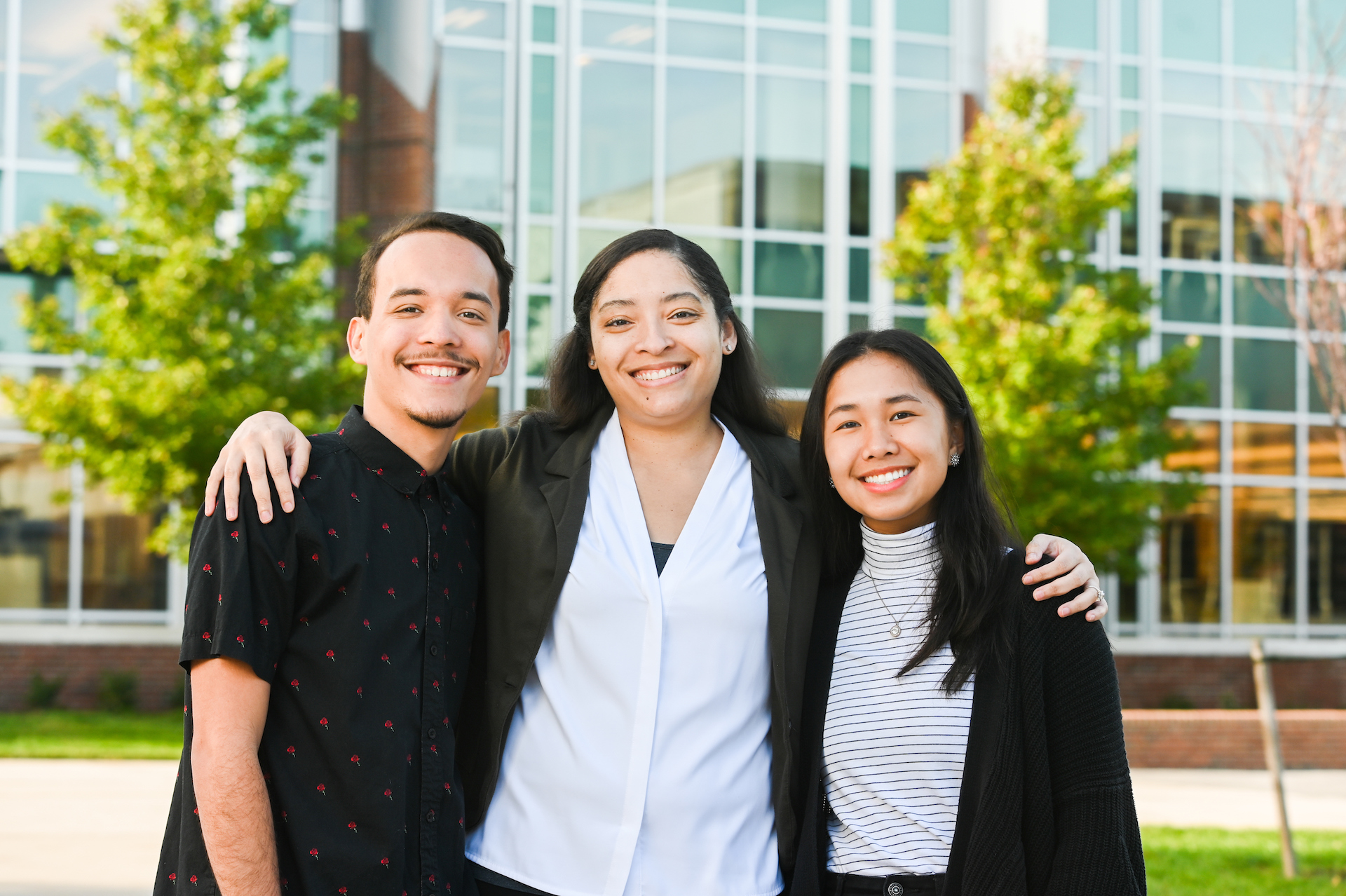 “I have something to tell you.”

Sixteen-year-old Juan Aponte wasn’t sure what to think as he stared at his mother from across the couch, waiting for her to continue.

“You’re going to go live with your aunt,” she said.

It was 2017 and Hurricane Maria, a Category 5 hurricane, had left a devastating wave of destruction across most of Puerto Rico, his home country, a few months before.

“Next thing I knew, I was at the airport,” Aponte remembers.

For the next two years, he acclimated to life in Watertown, Tennessee. It wasn’t without its challenges. He started high school in the United States with no academic records.

“We talked to the people at my high school (in Puerto Rico) to get my transcripts and records before I left, but they couldn’t get to anything because there was no electricity,” he says.

After graduation from his Tennessee high school this past spring, Aponte had to get used to another new environment: college at UTC. He had little idea what to expect because he’s the first in his family to go to college.

“At first, I felt a little bit lost,” he says. “It was tough because I didn’t really know anyone.”

All that changed when he got an email about a new mentorship program for first-generation students during the first week of classes.

“I went to an interest session, thinking I could meet people who were in my shoes or someone who’s been there before. Maybe they could give me advice or just be an ear to talk to,” he says. 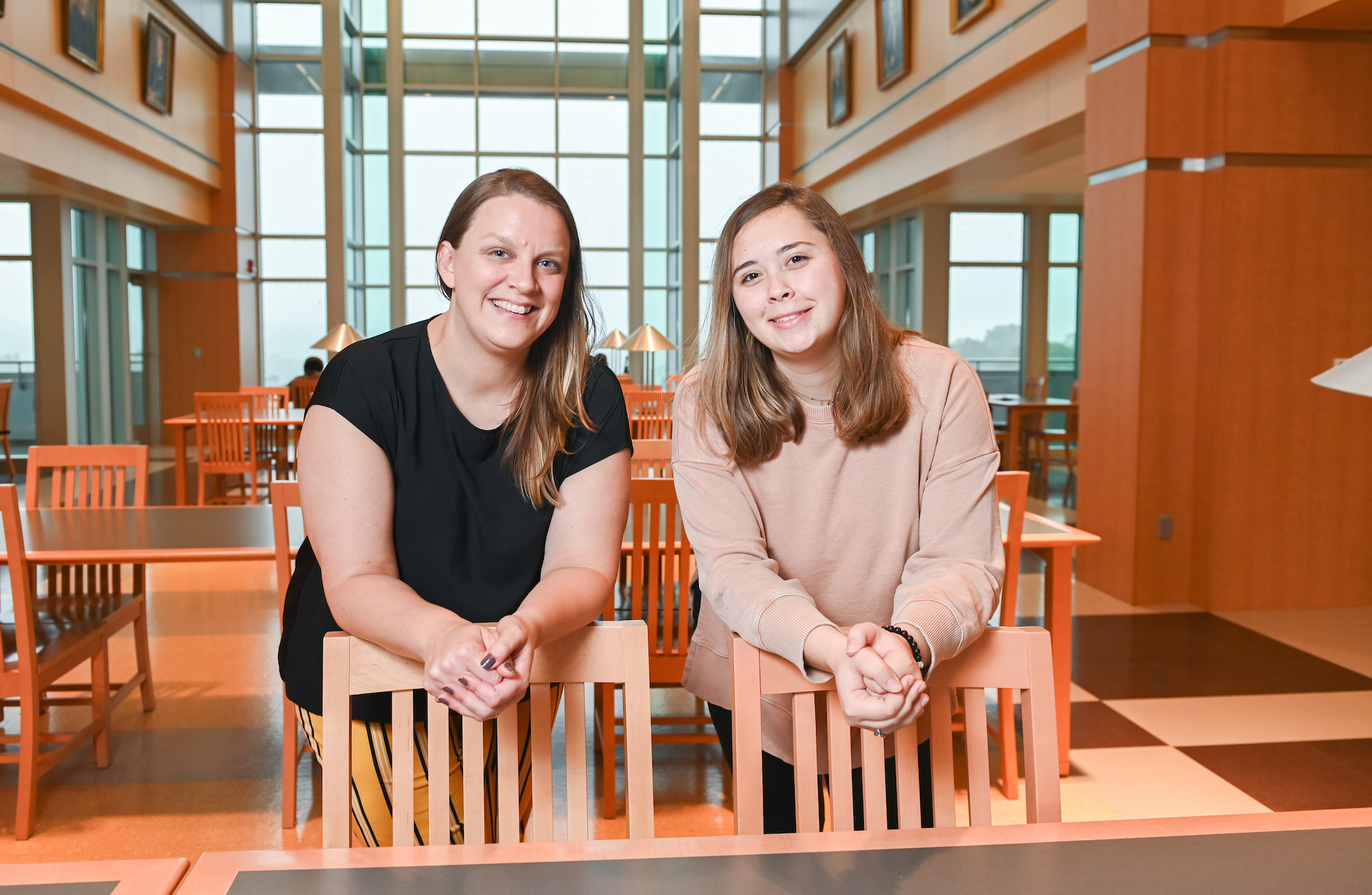 Crystal Edenfield (director of the First Gen program) with her mentee, Anna Reeves.

Crystal Edenfield also knows what it’s like to find her own way as a first-generation college student. The UTC director of student success programs grew up in Silver Creek, Georgia, a small, rural town where the nearest grocery store was 20 minutes away.

“We got our first stoplight by the time I graduated from high school,” she says with a smile.

Now a college graduate with a Ph.D. in education leadership, Edenfield wants to make a positive impact on students from similar backgrounds. Since coming to UTC in February, she’s created a living, learning community, a freshmen mentorship program, and other initiatives geared specifically for first-generation students. About 25 percent—or approximately 2,200—of UTC undergraduates are first-generation.

“We want those students to feel a sense of belonging and purpose while at UTC,” Edenfield explains. “If a student feels like he or she has found their place on campus, they are more likely to commit to college, get involved and be more active citizens in the campus community.”

One of the ways Edenfield helps to connect first-generation students to campus is the freshmen mentorship program. Interested students are paired with a UTC faculty or staff member who was also first-generation. Mentors serve as a coach, advocate and role model for their student. They provide individualized support and guidance to help the student make a successful transition to college. In its first year, the program has 85 student participants.

“Students want to see other students, faculty or staff who look like them,” Edenfield says. “That way they can identify with others and see that they belong. They can say to themselves ‘Yes, I can do this. There are people on my side to help me. There are people who started where I am and graduated to do great things.’”

Mentoring the Next Generation

Endia Butler felt disconnected when she first started college. Though she’s now working in the UTC Office of Financial Aid, she vividly remembers her struggles as a first-generation student after graduating from Chattanooga High School Center for the Creative Arts.

“College was really hard for me,” she remembers. “There were so many students. I went from my high school graduating class of 82 to thousands of students on campus. I felt like I was just a face in the crowd. If I had a question, I didn’t know who to ask or where to go. I felt really alone.”

Giving students someone to approach with questions is one of the main reasons she signed up to be a mentor.

“I really worry about students who were like me and have no one to help them navigate any part of this process. I was raised by my grandmother and, when I got an email my first year telling me I lost my HOPE scholarship, I thought, ‘I don’t know what any of this means,’” Butler says. “I want to make sure my students know that they can reach out anytime.”

“I can send a text and ask ‘Hey Endia, can I come by your office?’ and I just go and talk to her,” Aponte says. “I was surprised by how fast we bonded. I expected something more formal. Instead, we have a good friendship.”

“I’m very grateful to have signed up for this, to have met new people and to have gotten Endia as my mentor,” Lin says. “I honestly think I’d be lost if I hadn’t.”

When Anna Reeves received the news that Edenfield was her mentor, she was excited to learn from a fellow first-generation student who had so much experience in higher education.

“It’s like having a friend who checks on you,” Reeves says. “We’ve gone to lunch together. It’s really nice to know I have her if I have any questions or need anything.”

Now that Reeves has settled into college life, she has some advice for other first-generation students.

“Don’t put too much pressure on yourself,” she says. “Being the first in your family to go to college is a big thing. You should proud of it. It does come with a lot of responsibilities, but remember that you’re only human.”

According to Edenfield, it’s not uncommon for first-generation students to feel more pressure.

“I’ve talked with current students and they feel such responsibility to do well in school and graduate college. Not just for themselves, but for their whole family. They feel that they would be letting down their entire family tree if they don’t,” she says.

“In my personal experience, I felt a lot of pressure. I felt like ever since I was little, it was understood that I was going to be the one to go to college. Everybody in my family told me I was going to go,” Edenfield continues. 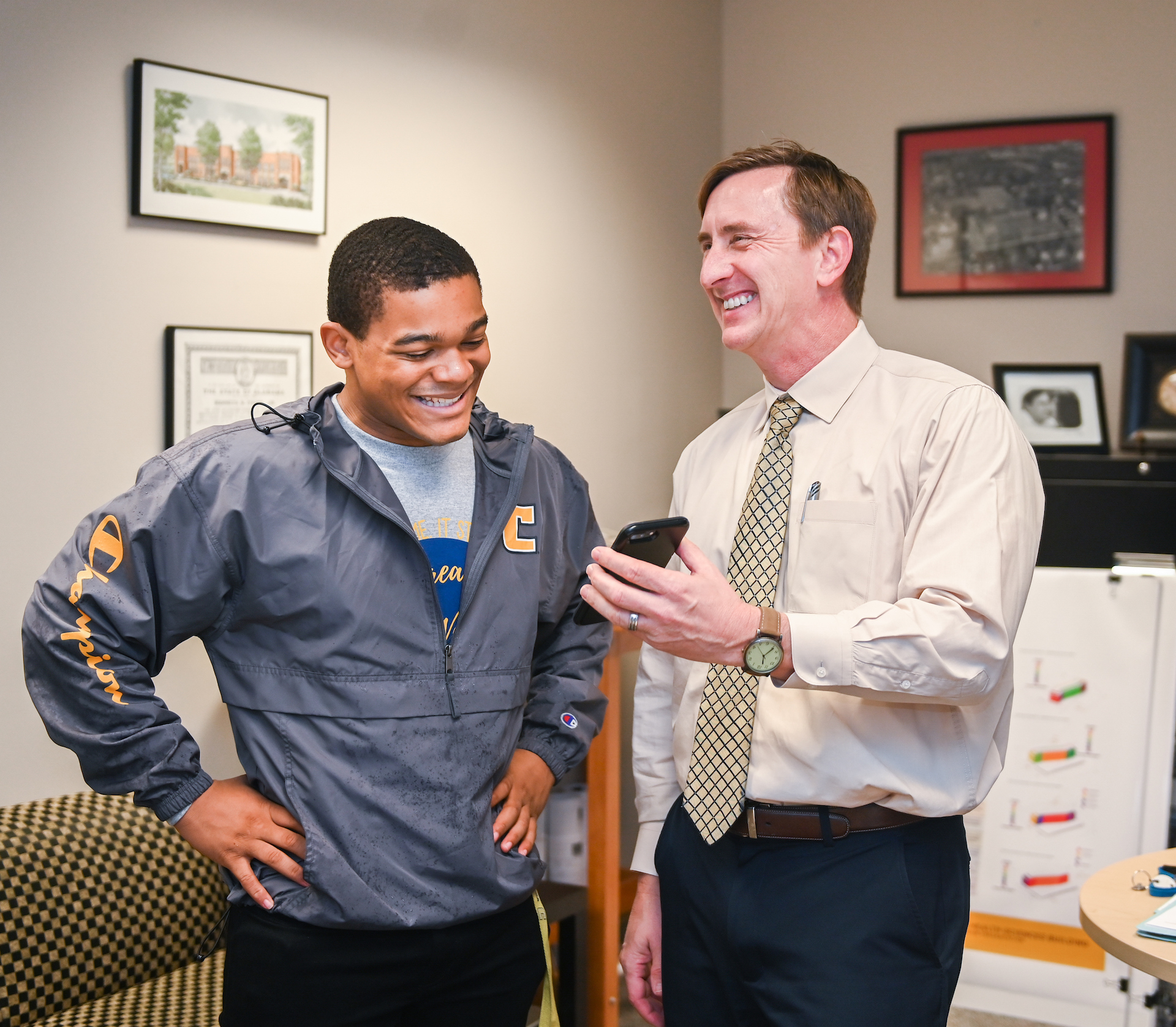 Kenny Tyler (works in Facilities) with his mentee, Abraham May

Now a licensed architect and the director of engineering and planning services at UTC, Kenny Tyler grew up helping his grandfathers and father, who worked as a carpenter, painter and electrician.

“I would be out on a hot roof in the summer and they would pull the plans out and say, ‘Kenny, I want you to be drawing these one day,’” he remembers. “I was very lucky to have people in my life who encouraged me. My parents still tell me how proud they are of me.”

He was the first person in his family to graduate from high school and college. He signed up to be a mentor in hopes of providing similar support to another first-generation student. He was paired with Abraham May, a freshman from Smyrna, Tennessee.

“I really didn’t know anything about college before I started at UTC, so I’ve appreciated the help. It’s been easier to adjust,” May said.