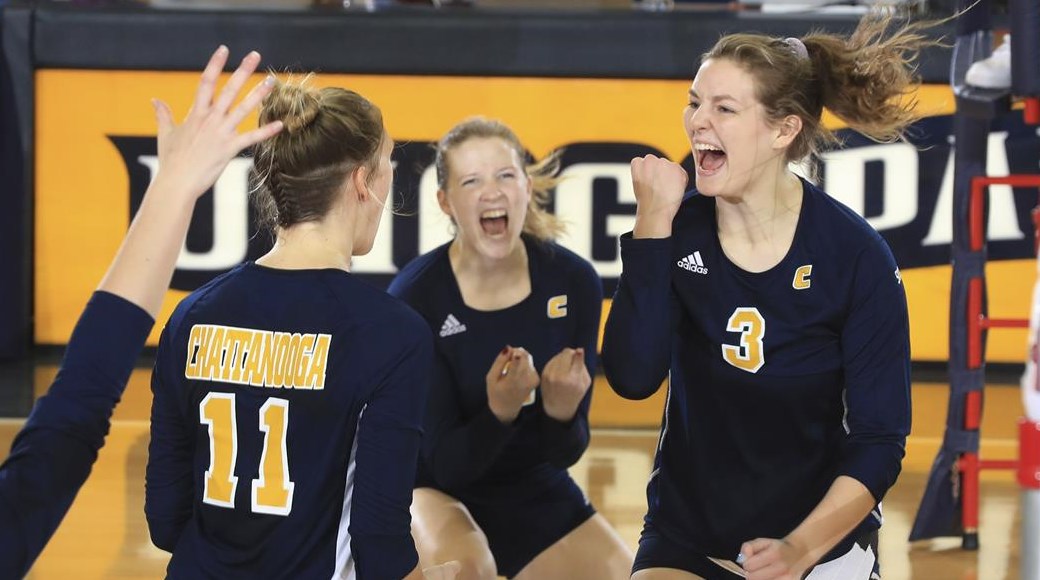 Dani Szczespanski, far right, celebrates with other members of the UTC volleyball team.i 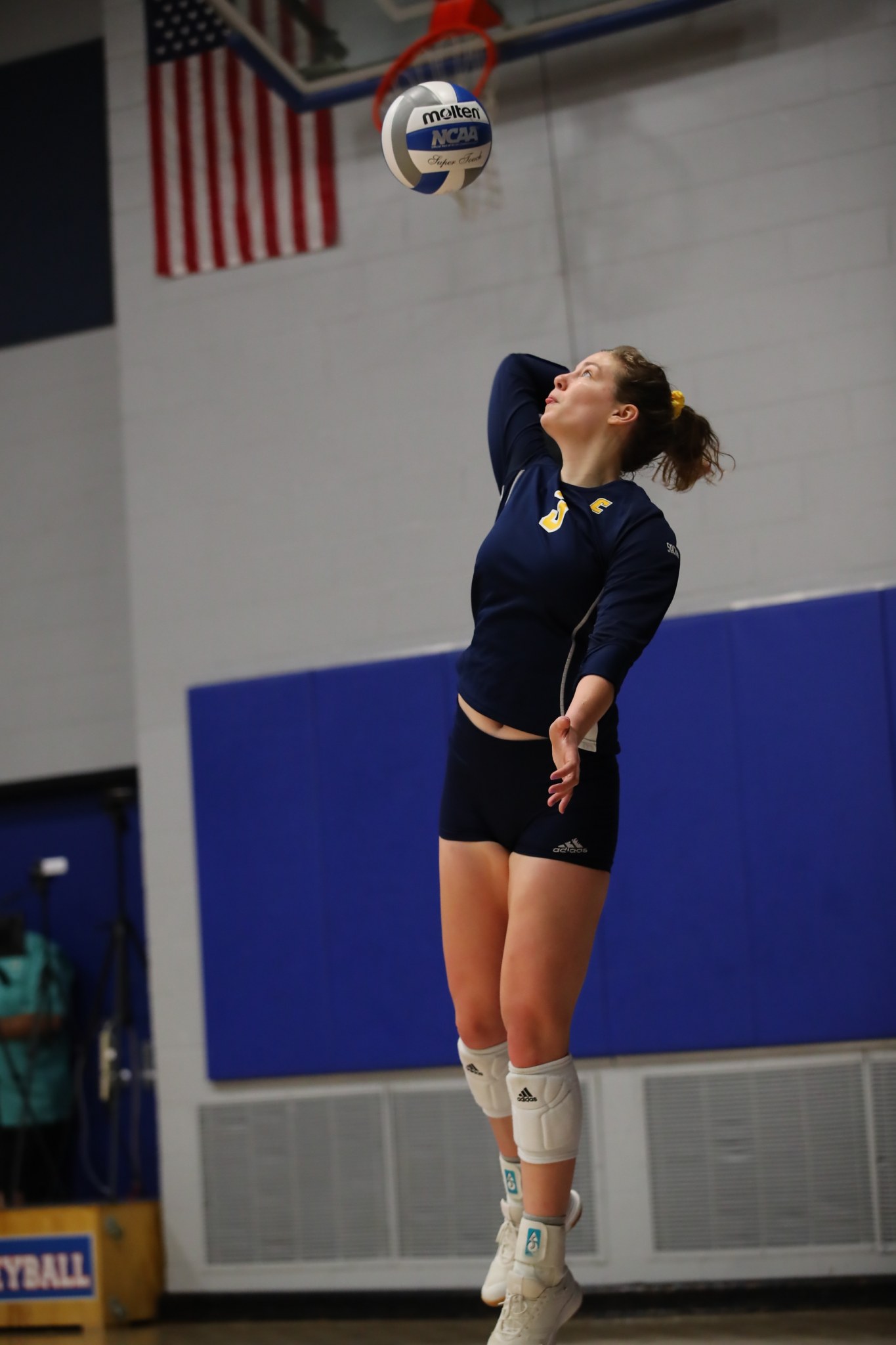 When your nickname is “Dani Pants,” you’re showing the world you can laugh at yourself.

And when your last name is tough to spell and even harder to pronounce, you often must put an exclamation point on that good sense of humor.

During UTC commencement ceremonies on Saturday, Dec. 14, Dani Szczepanski (pronounced zuh-PANT-skee, by the way) will be receiving her bachelor’s degree after double-majoring in criminal justice and psychology. She has recorded a 3.6 GPA while completing her undergraduate course load in 3½ years. And she’s managed to accomplish that while playing middle blocker on the UTC volleyball team.

A native of Cincinnati, Ohio, Szczepanski has made the most of her seven semesters on the UTC campus. She is described by those who know her as a high-energy, always- upbeat, genuinely friendly individual.

“ ‘Joy’ is my favorite word, so I always try and take that on,” she says. “When I’m around people, I’m high-energy and talkative. I always want to have them see me smile. Anyone that I see wave at me or walk past me if I’ve seen them before, I’m like, ‘Hey! What’s up?’

“The people from here are why I came to Chattanooga in the first place. Meeting the coaching staff and the former athletes that were here before me was an awesome experience. Coming to this city and seeing the beauty of it and all that it has to offer, it’s just like a little hidden gem. I loved being able to come here.”

You can even sense her friendliness when checking out her social media platforms. You have to be a happy person to go through life as @dani_pants4.

“Yeah, I got that ‘Dani Pants’ nickname early,” she says. “I played club soccer for most of my life, so my teammates gave me that nickname. I was a goalkeeper, so it fits. That, and people don’t usually know how to say my last name. The nickname is fitting.”

On the serious side, it’s one thing to double major; it’s entirely another to be a student-athlete and accomplish that feat in 3½ years.

“Honestly, I’m not sure why,” says Szczepanski, who has found her name on both the Southern Conference honor roll and the conference’s all-academic team.  “I initially started with a double major and a minor and decided to drop my minor because it was a lot. Criminal justice and psychology are both areas I have a high interest in.

“I’ve usually taken six classes every semester, 18 hours a course load. I feel like it’s not that much just because I’ve had to do it every semester, and it’s been fine. More of it has just been finding time to finish my homework. That’s been the biggest challenge for me, but one of the great things about being a student-athlete is the set schedule that you have. I know the amount of time I have to get my homework completed.”

The dream for Szczepanski is to build upon her two majors and eventually join the Federal Bureau of Investigation.

“Criminal justice and psychology work well together, and they work well with what I want to do,” she says. “Both of those together would help a lot in life, and so I decided to go for both. I want to be in the FBI. I have already applied to a college initiative hiring program, so that’s my first step. Everybody’s path into the Bureau looks different, so there’s really not a set way that I would get in. It’s just seeing where it takes me, how I get there.”

Szczepanski, though, admits she is keeping all options open. With one semester of athletic eligibility remaining, she will stay on campus and take political science classes this spring in order to play on UTC’s inaugural beach volleyball team. She is considering going to law school. Or “I might just be done with school and just go job hunting and see where the world takes me,” she says.

“I can’t believe that graduation is already here. I feel like I just moved to Chattanooga, so it’s super-crazy for me to grasp all of this. I know I’m staying another semester, but graduation means I’m closing out this chapter of my life. Seeing what is open for me after this is exciting. I’m nervous because I don’t know where I’m going to wind up; I’m a little bit of a planner, so that scares me. But I’m also really excited because I love a good adventure.”

As a student-athlete, volleyball has played an enormous part in Szczepanski’s UTC experience. On the volleyball court, she played in 116 matches and 409 sets during her time with the Mocs. Team sports are more than just athletics; they are very educational. Thanks to volleyball, Szczepanski says she learned many life skills that will be beneficial to her moving forward.

“Oh my gosh, probably all of the ones that I have, I learned here,” she says. “Time management is a big one, for sure. Organization, team skills, team building, leadership, and then I would say discipline in the little things. That’s something that Travis (Filar), our coach, really harps on a lot. I feel like, not only in a volleyball aspect but also in life, just paying attention to the details. Get the small things done, and the big things will follow.”

And maybe, just maybe, that big thing of joining the FBI will follow somewhere down the road. Instead of “Dani Pants,” she was asked, perhaps there’s a “Dani Pantsuit” in her future?