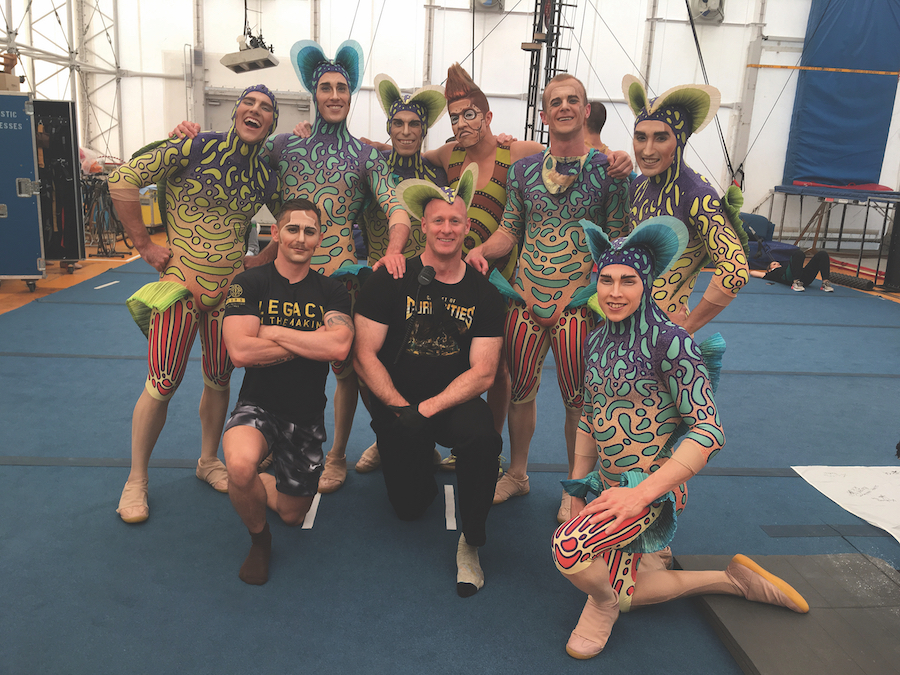 What can you do with a master’s degree in athletic training from the University of Tennessee at Chattanooga? In the case of John Faltus, joining the circus is an option—Cirque du Soleil, that is.

Faltus, a Rhode Island native who came to UTC by way of Boston, is today head athletic trainer on a North American tour of the Cirque du Soleil production Cortéo. Founded in the 1980s and today operating seven productions based in Las Vegas and multiple, simultaneous touring productions around the world, Cirque du Soleil is a Canadian entertainment company employing more than 5,000 acrobats, gymnasts, athletes and operations staff as the largest theatrical producer in the world.

“I definitely am a bit biased because I went through the program, but I would consider it one of the better graduate athletic training programs in the country,” Faltus says of UTC. “I had great mentorship through Gary Wilkerson and Marisa Colston during my two years at UTC. My only regret is I wish I’d had more time.”

After earning a bachelor’s degree in rehabilitation sciences in 2007 and a doctorate in physical therapy in 2008 at Northeastern University in Boston, Faltus came to UTC, where he completed a master’s degree in 2011. He followed that with a one-year Duke University fellowship in sports physical therapy. From there, he joined a Colorado-based sports medicine practice as an athletic trainer and physical therapist, then volunteered with the medical team at the U.S. Olympic Committee’s Sports Medicine Center in Colorado Springs in 2012 and 2014.

A chance to work with the NBA brought him back to Tennessee, where he became an assistant athletic trainer for the Memphis Grizzlies professional basketball team in 2014. “The opportunity to work in the NBA was something I had always been motivated to pursue,” Faltus says, “and during my years at UTC, I actually had the opportunity to intern with (NBA) medical staff, both at summer league and training camps, and get experience that way. That enabled me to get my foot in the door in a way and get the necessary kind of exposure to the world of professional sports, which is very different from even college or a clinic setting.

“And even prior to that, I had the opportunity to work almost two years in Vail, Colo., and travel a bit with U.S. Snowboarding. I’ve had a diverse background and skill set that has led me on this kind of career path that has somehow placed me in a very unique opportunity now working with Cirque du Soleil and traveling the world.”

Faltus joined Cirque du Soleil in August 2018 as head athletic trainer for a production of Kuríos, which was touring Japan, where Cirque has a large and enthusiastic following. “I don’t know if I can truly put into words the experience in Japan,” he says. “Cirque has been going there for quite some time now, and it’s really like the Beatles on tour. It’s an amazing experience. The culture itself, the people there—they love, love Cirque.”

Faltus says his experience in Japan was enhanced by contacts through a former UTC classmate. “We graduated athletic training school together, and he had a lot of local connections in Japan, so his setting me up with some of those connections before I even got there was tremendously helpful, and it allowed me to experience the culture and the food and that sort of thing in a very, very different way.”

Faltus also happened to have crossed career paths with an athletic trainer working for a Japanese professional basketball team. Reaching out to that friend led to stopping in to meet the strength and conditioning coach at the training facility of a Japanese professional baseball team. The visit happened on opening day of training camp with a swarm of media there to see the baseball players, coaches, general manager and team owner. Faltus ended up meeting all of them, too.

“One thing led to another. The team manager wanted to see the Kuríos show,” Faltus says. After the performance, the baseball manager ended up in a question-and-answer session with local media. “Next thing I know, I’m in newspaper headlines and photos with the manager of that baseball team after he went to Kuríos, smiling and shaking hands.”

And what about the actual work, tending to performers in artistic, acrobatic and highly athletic Cirque du Soleil shows? >>

“Their arena, their playing surface, is hanging upside down from a bike or being tossed from one platform to the other across stage and bouncing 15 feet up into the air off a net. I mean, it’s just so many different skill sets that they have. As a clinician, it really challenges you to create programs that best prepare them for those demands,” Faltus says.

He’s been on tour with the production traveling North America since May. “When we were in Japan, we had a little bit bigger staff because we had more shows per week and a bigger artist group to accommodate those show demands,” he says. “Since joining (this) arena tour, it’s myself and another therapist, as well as local doctors and massage therapists that we will bring in to provide service for the artists as needed on a weekly basis.

“Because we travel so much, so often, you don’t necessarily have the one network you go to because you’re in so many different cities, not just in the U.S., but all over the world. You really rely on your local medical network, and the networks that have been previously established from other shows that have come through.”

Leading with praise for Health and Human Performance department head Colston and Wilkerson, a member of graduate athletic training faculty, Faltus says UTC helped open doors to a rewarding career doing work that he loves. “In terms of the research application within the field, I had great experience there through research projects on campus as well as presenting at national conferences and the opportunity to network through the National Athletic Trainers’ Association,” he says. “And because of the connections to UTC and all the great work that Gary and Marisa have done over the years to not only build the program, but on a national level to get the students more involved and recognized in terms of their academic pursuits and career endeavors.”

Colston recalls Faltus as exceptionally engaged and involved, traits she credits for his career success. “One of the main attractions when we recruit students to the graduate athletic training program is the existence of so many opportunities for experiential learning and networking beyond the curriculum. Yet the very thing that attracts students becomes burdensome to many of them once in the program,” Colston says. “John was not like that. I remember him always asking to be engaged in initiatives and projects that Dr. Wilkerson and I had going. When students do that, they excel and get far more from the program and its faculty. That is what John Faltus did as a graduate student, and he continues to do as a health care provider.”

“UTC definitely left a great impression on me,” Faltus says, “and has allowed me to pay it forward, so to speak, in the years thereafter.”