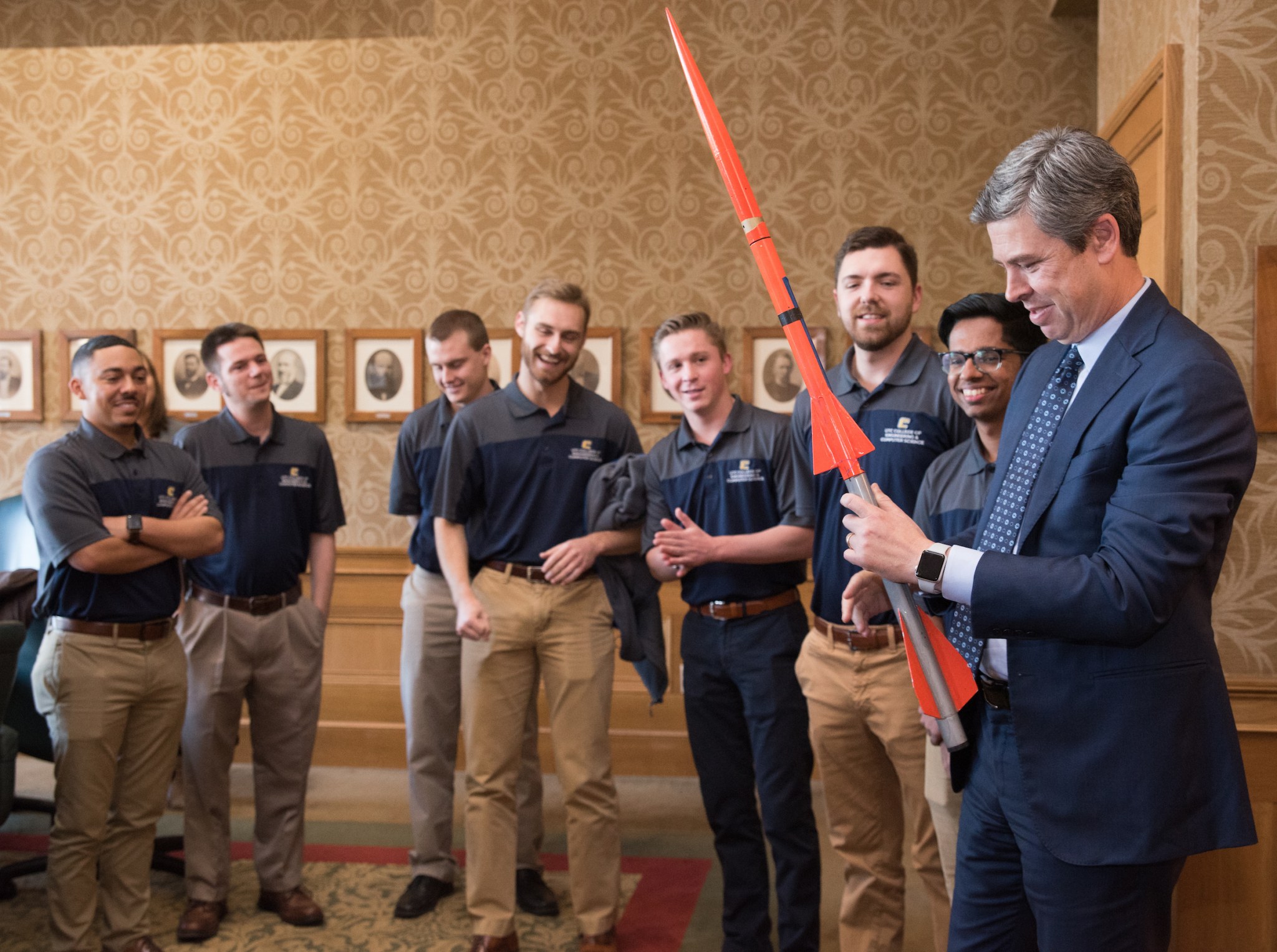 Ashwyn Sam, next to Chattanooga Mayor Andy Berke, was a member of the Rocket Mocs team that set a national record in 2018.

Ashwyn Sam admits it: He’s kind of a procrastinator.

“I like to think that I like to work slow, but it’s actually procrastination,” he says with a smile in his voice.

His drive to “work slow” is why, when he decided to apply to be one of the prestigious Knight-Hennessy Scholars for 2020—a scholarship worth about $300,000 total, covering all costs of attending Stanford, including tuition, housing, meal plan, books, fees, supplies and local transportation, among others—he waited until the last week before the deadline to decide to fill out the lengthy application, until the last day to record his required video presentation, the last two hours to transmit the online application and the last 15 minutes to send the second—and critical—recommendation letter.

“They recommend starting about two months before the application deadline. It’s a very lengthy application, including a video statement,” says Sam, an Honors College student at UTC with a double major in mechanical engineering and mathematics.

Despite the cut-it-to-the-bone timing, Sam is one of 83 winners out of more than 6,000 applicants for a Knight-Hennessy scholarship. After graduating in May, he heads to Stanford in the fall, where he’ll start two years of work on his master’s in aeronautics and astronautics followed by three more years of Ph.D. work in the same subjects. The first three years are covered by the Knight-Hennessy scholarship, while the final two will be covered by other scholarships, he says.

He received notification that he’d won in a phone call from John Hennessy, former president of Stanford, a member of the Google board of directors and an acknowledged genius in computer science.

“I was shocked. I didn’t know what to say. It was probably the most awkward phone conversation ever. I couldn’t speak coherently. I had to tell myself to breathe, so there were a lot of long, awkward pauses,” says Sam, one of the Rocket Mocs who set a national record in 2018 with a launch that reached 11,563 feet.

But he almost didn’t apply to be a Knight-Hennessy Scholar in the first place.

“If you asked me a year ago if I was even going to apply, I probably would have laughed and said, ‘Absolutely not. There’s not a chance of me getting into Stanford,’” says Sam, one of the Rocket Mocs who set a national record in 2018 with a launch that reached 11,563 feet.

It took the prodding of his parents and two members of the Honors College faculty and staff to convince him. One was Trevor Elliott, UC Foundation assistant professor in mechanical engineering and Sam’s faculty advisor.

“There are people that enter your life that make you a better person just for having known them,” Elliot wrote in his recommendation letter to Knight-Hennessy. “In the academic setting there are students that enter your classroom, research laboratories, or special projects who possess the intellectual capacity and thirst for knowledge that set them apart from all others. I have had the privilege of working with one such student that embodies these qualities, Ashwyn Sam.”

Leslie Pusey, director of national scholarships and fellowships in the Honors College, was another “prodder,” telling him that, while the Knight-Hennessy is a ‘unicorn’ prize that’s hard to get, there’s no reason why he shouldn’t apply and give it a shot.

Pusey says Sam’s personality and accomplishments in the Honors program and Rocket Mocs made the Knight-Hennessy “a good fit for him.”

“Ashwyn is humble, genuine and an understated leader. What I mean by understated leadership is that he is not overly gregarious and certainly not loud or demanding, but he still subtly commands attention from others,” Pusey says. “People know him and want to follow him because he’s kind, smart, engaged and gracious.”

She wrote the second recommendation letter for Sam’s Knight-Hennessy application—the one transmitted in the last 15 minutes. And it almost didn’t get sent at all.

Sam already had the letter from Elliott in hand, so two hours before the application deadline—yes, two hours—he walked into Pusey’s office and asked her to write the second letter. She agreed and had finished the letter when Sam went to the electrical outlet to unplug his laptop. But he pulled the wrong plug.

“I unplugged what I thought was my computer and her monitor goes black,” he says. “At this point we’re freaking out. Literally, there goes my chances out the window. I could see in her eyes my chances literally disappearing.”

Luckily, he’d only pulled the plug on her monitor, so when it was plugged back in, the screen lit up and her letter was still there.

In the hours before approaching Pusey, he also went to the Knight-Hennessy website to record his video presentation, cutting short a dental cleaning appointment to do so. Under the rules, he had only five tries to get it right.

“I hadn’t even started on it. I didn’t know exactly what I wanted to say,” he says. “I thought, ‘Do I really want to do this? There’s no way I’m going to get into Stanford anyway. I’m doing everything at the last minute.’”

He went ahead despite his doubts and was happy with the version from his third try.

After earning his master’s and doctorate, Sam says he wants to stay in academic research and become a professor. Maybe. He’s sure, though, that his time at Stanford will result in many new ideas and possibilities, so his future is actually kind of hazy, although success seems destined.

In his recommendation letter, Elliott said the same.

“I would like to let you know my assessment of Ashwyn is that he possess the three most desired qualities for his success within your program and at Stanford: the thirst for knowledge with the intellect to use that knowledge to its fullest potential, the initiative and drive to see any work through to completion and a service-centric approach and mindset that will always better all of those around him.

“He is exactly the type of student that will be in graduate courses, working on cutting-edge research, and solving the world’s most complex engineering problems.”